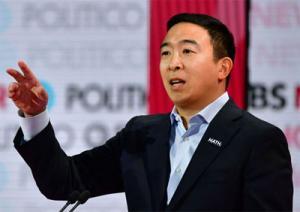 This is the last in my 2020 Democratic Presidential Candidate Healthcare Policy series. In some cases I did wonky, in-depth analyses; in others I've simply given an overview with some notes here and there.

Andrew Yang's falls into the latter category, not because of any bias against him, but simply due to a lack of time on my part to give it a more detailed review.

Officially, Yang supports "Medicare for All", but like several other candidates both now and in the past, this isn't quite the same "Medicare for All" that Bernie Sanders is pushing (and which Elizabeth Warren is mostly still pushing):

We are having the wrong conversation on healthcare.

Instead of addressing the underlying problems driving unaffordability and access, we Democrats are spending all our time arguing over who is the most zealous in wanting to cover Americans. Over who has wanted to do so longer. Over who cares more about the health of Americans.

To be clear, I support the spirit of Medicare for All, and have since the first day of this campaign. I do believe that swiftly reformatting 18% of our economy and eliminating private insurance for millions of Americans is not a realistic strategy, so we need to provide a new way forward on healthcare for all Americans.

As Democrats, we all believe in healthcare as a human right. We all want to make sure there is universal affordable coverage. We know we have a broken healthcare system where Americans spend more money on healthcare to worse results. But, we are spending too much time fighting over the differences between Medicare for All, “Medicare for All Who Want It,” and ACA expansion when we should be focusing on the biggest problems that are driving up costs and taking lives.

We need to be laser focused on how to bring the costs of coverage down by solving the root problems plaguing the American healthcare system.

That means controlling the COST OF PRESCRIPTION DRUGS. That means INVESTING IN INNOVATIVE TECHNOLOGY to cut waste and boost access. That means changing the incentive structure for providers. That means SHIFTING OUR FOCUS on more stages of care. That means revamping what COMPREHENSIVE CARE means in the 21st century to include crucial aspects of WELLBEING. That means taking on the powerful lobbyists in D.C.

Diagnosing and addressing these underlying problems is the first and most important step in ensuring everyone has access to healthcare, because we cannot extend quality coverage to everyone without real strategies on how to avoid the toxic incentives of our current system. We can’t afford to mess this up.

Fundamentally, we need to have a more productive conversation about healthcare in America. It’s time to take a step back from enrollment mechanisms and creative accounting to focus on lowering costs and improving quality.

Of the various candidate plans, Pete Buttigieg is the only other one I know of who's made provider reimbursements (that is, how much we pay hospitals and doctors) a major focus of his healthcare proposals...and even then, Buttigieg still pushes improved payment mechanisms (expanded subsidies, a public option, etc) above the provider side. Yang makes this side of the equation front & center, which is interesting.

We need to fix our broken healthcare system by tackling the root problems through a six-pronged approach:

I'm mostly gonna just go with the bullets from each of these sections:

Most of this is pretty standard, although having the federal government step in as a public drugmaker themselves is unusual...although I believe Elizabeth Warren has included this as a possibility as well.

I honestly don't know too much about telehealth, but it certainly makes sense to ramp up its use where appropriate, especially given the dramatic advances in telecommunication technology and the availability of ultra-high bandwidth wireless internet live feeds.

WARNING. Danger, Will Robinson. Look, frivolous lawsuits are certainly a problem, but this is setting off red alert klaxon "tort reform" alarms left and right.

Yeah, OK. The ACA was supposed to move doctors and hospitals over to EHRs by now, I believe, but doctors have been notoriously resistant to it, and I'm guessin there are logistical and legal problems involving privacy and HIPAA, so I'm a bit skeptical that this would actually happen.

Here's where Yang's proposals start to get a bit concerning:

On the surface, some of these make sense...but, well, I'll turn this part over to my friend, lawyer and disability activist Matthew Cortland, who says:

I'll save y'all some time: Yang's healthcare "plan" isn't so much a plan as it is incoherent, ableist musings...It reads like a moderately well researched proposal in a first semester MPH service and delivery course from someone who had an unrelated undergraduate major.

I think it was @jonfavs who said something like Yang is good at stating the problem but his solutions...aren't. "The demand for physicians is outpacing the available supply" - for half a second I thought the next sentence was going to be "so we must lift the Medicare GME caps...NOPE! His solution is to allow "licensed physicians to administer medical services and medication through telehealth services" without needing a "redundant license" in the state they're telehealthing in to.

Back to Yang himself...I'm gonna skip over most of this:

I'm glad to hear he supports repealing the Hyde Amendment, but something tells me this last promise wouldn't hold.

Well now. I'm stunned that he sort of buried his Public Option in near the end as a small bullet point instead of making it a major cornerstone of his proposals...but that's exactly what he's done.

Again, I applaud the "corruption purity" standard here, but that's gonna be a difficult one to keep. ANYONE who's ever worked as a Phrma exec? Even for, say, one week as a junior vice-president of research or whatever? That's gonna make it more difficult to get people who understand the industry in your administration.

Um...huh? He's basically going to bribe ex-administration employees not to accept bribes? Wouldn't it make more sense to beef up the anti-lobbying laws we already have?

Ummm..."Democracy Dollars"? There's something like 220 million registered voters in the U.S...that's $22 billion per cycle, or $11 billion per year, given out to voters to turn around and donate to a Congressional candidate of their choice? Is that on top of his $1,000/month Basic Income giveaway ($3.9 trillion per year)? And how is that supposed to "protect their representatives from medical lobbyists"? I mean yes, it would likely help low-funded candidates raise more money...but wouldn't that just give their opponents even more incentive to take lobbying bribes in even larger amounts?

Now that sounds reasonable to me.

So...there you have it. There's some useful and interesting ideas there, but in terms of concrete proposals to specifically reduce premiums, deductibles and co-pays, there's almost nothing you can really lock down. It's like trying to nail Jell-O to the wall...yes, it's tangible but also awfully amorphous for the most part. He never actually talks about the Affordable Care Act (other than a very brief mention at the beginning), and his sole Public Option reference is buried in the end, making it difficult to "compare" to the other candidate proposals.

In some ways that might not be such a bad thing, I suppose; at least it shows some "outside the box thinking", etc etc...but it's still hard to get a read on.