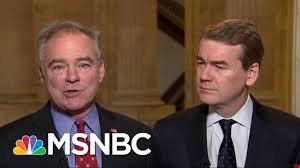 There's over a half a dozen major healthcare reform bills swirling around the Democratic side of the aisle these days. The two biggest contenders at the moment are the universal, 100% mandatory single payer "Medicare for All" bill being pushed by the Progressive Caucus in the House (led by Pramila Jayapal) and, of course Bernie Sanders in the Senate; and the universal, 50% mandatory (over time) "Medicare for America" being championed by Reps. Rosa Delauro and Jan Schakowsky in the House and Presidential contender Beto O'Rourke.

Regular ACA Signups readers know that I'm a huge fan of the Medicare for America approach (although I think we also need a robust ACA 2.0 upgrade to tide things over until Med4Am can be ramped up). However, there are still a bunch of other proposals out there, and there's nothing wrong with any of them; it's mostly a question of how far you want to set your marker.

Last month, one of my own Senators from Michigan, Debbie Stabenow, formally introduced her own "Medicare at 50" bill, which is among the least bold proposals of the bunch. All it really would do is allow people to voluntarily enroll in the current Medicare program starting at age 50 (currently it's semi-mandatory for those age 65 and up). It doesn't really change the actual benefits of existing Medicare for either current enrollees or the new ones; it simply lets them buy in if they'd like to. HHS would figure out how much premiums would be, and enrollees would be allowed to use the ACA's APTC & CSR subsidies to help pay for Medicare if they qualified for them.

I didn't write anything up about Stabenow's proposal at the time (even though she's one of my Senators, and an awesome one at that) because 1) I'm not sure that there's all that much to discuss--the paragraph above seems to cover most of it; and 2) I simply didn't have the time available since I was dealing with a major home improvement project and my son's bar mitzvah.

Anyway, next week one of the other "Medicare"-named bills is being formally launched:

As Democrats debate how best to expand health coverage, Tim Kaine and Michael Bennet are trying to ensure the party doesn’t swing too far to the left.

The Virginia and Colorado senators next week will reintroduce their “Medicare X” plan, which would create a new public option for health insurance — an idea that was originally part of Obamacare but was jettisoned for being seen, at the time, as too progressive.

Even as it moves past current law, their measure envisions far less sweeping change than “Medicare for All” proposals backed by Sen. Bernie Sanders (I-Vt.) and some of their Senate colleagues running for president.

Kaine, a former vice presidential candidate, and Bennet, who is mulling his own 2020 run, view the plan — one of a handful of center-left proposals being floated — as an alternative option for progressives who want to expand health care availability but don’t want to eliminate private insurance.

...Under their bill, to be introduced on Tuesday, people would have the option of purchasing the plan on the Obamacare individual and small-business exchanges. Members of the plan would have access to the Medicare network of doctor in addition to the benefits of other plans under the Affordable Care Act like maternity and newborn care. It would also establish a reinsurance program to reduce premiums.

Maternity/newborn care have never been a part of Medicare before, mainly because of the obvious: The vast majority of Medicare enrollees are elderly and thus not exactly likely to require them. The reinsurance program sounds like it was taken from the ACA 2.0 proposals. Speaking of which...

The latest version of the bill also would expand access to tax credits. Obamacare allows for tax credits for people whose income is up to 400 percent of the federal poverty line. The proposal would remove that cap and allow people who make more than the threshold to be eligible for the tax credit — whether they’re on a Medicare X plan or a private insurance plan.

Yep, everyone finally seems to agree that if we're going to stick with the exchanges for awhile, the 400% FPL cap, at the very least, has got to go.

Those dates are gonna have to be bumped out since, like both MFA and Med4Am, ther'es no way this is gonna even get passed before 2021.

I should also note one absurdly disingenous quote in the article:

...“They want to get rid of Obamacare too,” said Sen. John Barrasso (R-Wyo.) “Presidential candidates want to eliminate Obamacare, take a wrecking ball to insurance people get from work, which is 160 million people, and go to a government-run program.”

Bernie Sanders notwithstanding, the other Presidential contenders would prefer to replace the ACA with something that goes farther in having the federal government provide and/or pay for healthcare coverage for more Americans. That's the exact opposite of tearing it down, but that should be self-explanatory.

I can't imagine being won over to supporting Medicare X over Medicare for America (although I admit it does have a cooler name), but it should still be interesting to see what specifics they have in mind.