Sens. Sanders & Warren are finally asked the question I asked in July 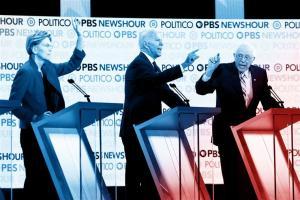 Back in July, just ahead of the 2nd Democratic Presidential Candidate Debate here in Detroit, I laid out what my question would be (If I could only ask one question) for the various candidates.

The wording of the first part varied somewhat depending on the candidate's position on healthcare policy, but the second part was identical for each. Here's how I worded it for Bernie Sanders:

"Senator, you've long been a staunch advocate of moving to a universal, mandatory, single-payer healthcare system which you call "Medicare for All", and have publicly rejected any proposal which includes cost sharing at the point of service or which continue to allow private major medical plans as not being acceptable.

Would either of these bills be acceptable to you even as temporary improvements? As you know, while the President can advocate for his or her preferred plan, the version which ends up being passed through the House and Senate may end up looking quite different from what they had in mind. What alternatives to your proposal--whether one of the bills already on the table or some other variant--would you be open to?"

Here's how I worded it for Elizabeth Warren:

"Senator, while you're a co-sponsor of Senator Sanders' single-payer "Medicare for All" bill, for over a year you've also been the lead sponsor of a robust ACA 2.0 bill called the "Consumer Health Insurance Protection Act", several major provisions of which Vice-President Biden included in his recent plan. You're also a co-sponsor of Senator Schatz's "State Public Option Act" which would let people buy into Medicaid.

Consistent with this, in March during a CNN Town Hall, you explained that you were open to several different pathways towards achieving universal healthcare coverage, stating that as long as you lead with your values, you'll get to where you want to be.

"Shortly before the Miami debate last month, however, you seemed to have changed your "several different paths" rhetoric when it comes to healthcare policy, and have made several statements indicating that Sen. Sanders specific "Medicare for All" bill is the best, or perhaps the only, way to go. Is that accurate, or are you still open to one of "several paths"?

Related to this, while the President can advocate for his or her preferred plan, the version which ends up being passed through the House and Senate may end up looking quite different from what they had in mind. What alternatives to your proposal--whether one of the bills already on the table or some other variant--would you be open to?"

(Again, this was in July; Warren would indeed later back off the "M4All or Bust" stance somewhat.)

Well, that question was never asked of any of them in July. Or in August. Or September, October or November.

But then, at the December debate a few hours ago, Tim Alberta of Politico asked pretty much exactly this (in fact, he was even more blunt about the prospects of a more sweeping bill like Bernie's M4All bill actually making it through Congress).

Technically he brought four of the candidates into the discussion (Joe Biden and Amy Klobuchar were sandwiched in between Bernie Sanders and Elizabeth Warren), but the only two who were actually asked the original question were Sanders and Warren.

Most of the attention post-debate seems to be on the dust-up between Biden and Sanders over paying for Medicare for All (yet again), but I was far more interested in Sanders' and Warren's responses to the original question:

TIM ALBERTA: Moving to health care, an issue that voters tell us every day is still the number-one priority for them, Senator Sanders, you've spent plenty of time discussing and defending the merits of your Medicare for all plan. But the reality is that if Republicans retain control of the U.S. Senate or even if Democrats win back a narrow Senate majority, your plan as constituted probably would not have the votes to pass Congress.

So the question, Senator, is, if Congress rejects your plan and the American people are looking to you for leadership on this issue, are there smaller specific measures that you would take immediately to expand coverage and decrease costs as president?

SANDERS: Well, Tim, at a time when we're spending twice as much per capita on health care as any other nation, when 87 million people are uninsured or underinsured, when 30,000 people are dying each year because they don't get to a doctor when they should, and when a half a million people are going bankrupt because of the dysfunctional and cruel system that we currently have, you know what? I think we will pass a Medicare for all single-payer system, and I will introduce that legislation in my first week in office.

Now, to answer your question, I think when we go out to the American people and tell them that right now we have got to take on the greed and corruption of the pharmaceutical industry, for example, which in some cases charges us 10 times more for the same exact drug as is charged in this country, when the American people understand that Medicare for all expands Medicare to cover home health care, dental care, eyeglasses, and hearing aids, and does it at a cost far, far lower than what some of my opponents are talking about, you know what? We're going to have the American people behind us. We will have Congress behind us.

In other words...no. He's unwilling to admit the slightest possibility that his specific bill might not pass the House and Senate, and therefore is unwilling to accept that he might have to walk his proposal back a tiny bit.

Now, I'm not naive. This is clearly campaign "don't negotiate with yourself before you start/move the Overton window" campaign posturing. If he was to actually be elected President, and some ACA 2.0-type bill were to indeed pass the House and Senate and land on his desk, the odds are pretty high that he'd end up signing it regardless, and then trying to smooth it over with some "it isn't a perfect bill but..." rhetoric the way President Obama did with the Affordable Care Act when the Public Option didn't make the cut.

The difference is that Bernie has spent years insisting that anything short of 100% pure, 100% universal, 100% comprehensive, 100% tax-funded, $0 cost-sharing, 100% mandatory Medicare for All is the only acceptable next step forward on healthcare policy in the United States, period (even as he's quietly co-sponsored...and then stripped his co-sponsorship of..."unacceptable" "incrementalist" bills like the ones I listed above).

ALBERTA: Thank you, Senator Sanders. Senator Warren...We'd like -- we'd like to bring you into this discussion. The same question to you that I posed to Senator Sanders, if Congress rejects a Medicare for all proposal and you're the president, are there smaller specific measures that you could pursue with bipartisan support to decrease costs and expand coverage?

So here's how I approach this. I want to do the most good I can for the most people as quickly as possible. On day one, I'm going to attack the prices on commonly used drugs, like EpiPens and insulin, and bring down those prices. The president can do that -- I love saying this -- all by herself. And I will do it. That's going to save families hundreds of millions of dollars.

And then in the first 100 days, because I found a way to pay for full health care coverage for everyone without raising taxes on middle-class families... I'm going to make available to people for a full health care coverage for 135 million people. It will be at no cost at all. And they can opt into that system...For others, it will be at a low cost. We have got to start moving and move fast...We can do that -- we can do that on 50 votes.

In other words, regardless of what they would ACTUALLY be willing to do or not do once they took office, here's the official positions of Sanders and Warren:

Personally, I strongly prefer the second approach. I'm sure most Bernie supporters will disagree.