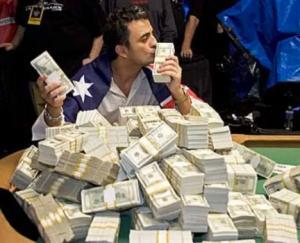 This story ran a few weeks ago, but I'm just now getting a chance to write about it, and it's critically important given that the 5th Circuit Court of Appeals is still expected to issue their ruling in the absurd Texas vs. U.S. (aka #TexasFoldEm) lawsuit brought by 20 Republican state Attorneys General.

The GOP has spent a solid decade trying to tear down the Patient Protection & Affordable Care Act. They started even before the bill was passed or signed into law, of course, which is why it ended up passing without a single Republican vote in either the House or Senate. After that, they filed lawsuit after lawsuit (a handful with merit, others utterly baseless, such as the current one, which may have the thinnest case in history to ever make it so far in federal court), while simultaneously voting to repeal the ACA either partly or fully dozens of times.

While the GOP has managed to cut off a few fingers of the ACA here and there along the way, the law has remained remarkably resilient, suffering damage but managing to (mostly) bounce back every time it's gotten hit. There have only been five points I can think of where it has ever been truly in danger of being wiped out since 2009:

For a very brief time in 2009, the Democrats held a trifecta in the federal government, holding control of the White House, the House of Representatives and even an official "Supermajority" of 60 votes in the Senate, which was, at the time, seen as the only way of squeaking through the ACA without any Republican votes. Unfortunately, with Ted Kennedy's death and the unexpected victory of Republican Scott Brown to replace him in January 2010, the 60-vote threshold was lost.

As a result, final passage of the ACA was thrown into serious jeopardy; the most obvious fallout is that instead of passing the more robust House version (which would have included the much-ballyhooed Public Option and would have expanded Medicaid up to 150% of the Federal Poverty Level), they had to go with the Senate version, which only expanded Medicaid to 133% FPL (technically 138% in practice) and which, most significantly, didn't include a Public Option plan which would involve the federal government negotiating rates with healthcare providers.

(As an aside, I was surprised to learn that while the House version's premium subsidies would have been more generous for lower-income subsidized enrollees, it actually would have been less generous at the upper end of the 100-400% FPL eligibility range...it would have maxed out at 12% of income instead of 9.8%. On the other hand, CSR assistance would have been much more generous all the way up the scale, reaching 78% Actuarial Value at 300% FPL instead of cutting off at a much stingier 74% at 250% FPL).

This was the first significant legal challenge to the ACA (that is, there have been dozens of other important lawsuits swirling around the law, but this was the first one which could have completely wiped it out). In short, the National Federation of Independent Businesses claimed that the ACA was unconstitutional in part because of the individual mandate requirement that all Americans either have qualifying healthcare coverage, pay a financial penalty for not doing so, or qualify for an exemption from the penalty.

The lawsuit also involved a claim that the ACA's Medicaid expansion provision (in which the federal government essentially told states that if they didn't accept expanded Medicaid under the new law, they'd lose all federal funding for their existing Medicaid populations) was unconstitutional because it was "coercive".

Technically speaking, the plaintiffs winning this lawsuit wouldn't have actually killed the ACA as a whole, but it would have crippled it pretty severely. In a section discussing the individual health insurance market exchanges, it was noted that in order to be eligible for premium tax credits, enrollees had to be "enrolled in through an Exchange established by the State".

The plaintiffs in the case claimed that "established by the State" meant that only state-based ACA exchanges should therefore be eligible to pass along premium subsidies, as opposed to the federal exchange (HealthCare.Gov). The wording was essentially a drafting error in the legislative text--there were a dozen other places throughout the text which referred to subsidies being available via either a state- or federally-established exchange. The Supreme Court ultimately decided...

...It rejected petitioners' interpretation "because it would destabilize the individual insurance market in any State with a Federal Exchange, and likely create the very 'death spirals' that Congress designed the Act to avoid."

The Court observed that the petitioners' interpretation would make the ACA "operate quite differently in a State with a Federal Exchange. As they see it, one of the Act's three major reforms—the tax credits—would not apply. And a second major reform—the coverage requirement—would not apply in a meaningful way...[W]ithout the tax credits, the coverage requirement would apply to fewer individuals.

And it would be a lot fewer...If petitioners are right, therefore, only one of the Act's three major reforms would apply in States with a Federal Exchange." Here, the statutory scheme compels us to reject petitioners’ interpretation because it would destabilize the individual insurance market in any State with a Federal Exchange, and likely create the very “death spirals” that Congress designed the Act to avoid.

This was John McCain's famous "Thumbs Down", effectively dooming the GOP's seven-month long frenzied attempt to repeal the Affordable Care Act by a single vote (technically it was due to three "no" votes by Republicans--McCain's, Lisa Murkowski's & Susan Collins'--along with the "no" votes by all 48 Democratic Senators, of course). The GOP-controlled House had infamously passed their "American Health Care Act" a few months earlier, meaning it would have only taken one more vote in the Senate to repeal the ACA and replace it with a big pile of garbage.

The vote itself was tecnically not on the Senate GOP's "BCRAp" bill (Better Care Reconciliation Act Plan), but on a different repeal variant called the "Skinny Plan", but due to the arcane Senate rules, it amounted to the same thing: Voting "no" on the Skinny Plan amounted to putting the kibosh on the BCRA or the other repeal variants on the table as well, and therefore on repeal of the ACA itself.

This is a lawsuit which combines stupidity with chutzpah. The lawsuit, brought by 20 GOP state Attorneys General, goes like this:

Seriously. That's the entire case in a nutshell: "We cut off one leg of the law, therefore the entire law has to die." Every Constitutional scholar across the full ideological spectrum has agreed that it's an utterly absurd argument...including one of the architects of the King vs. Burwell case.

I've written about this a ton over the past year, and right now there's not much to be done but wait for the 5th Circuit Court of Appeals to issue their decision (at which point the case will be appealed up to the Supreme Court as well).

All of this brings me back to the original point of this article: Why are they still so dead set, against all logic and decency, on repealing the ACA? Hating the individual mandate penalty itself (and even the employer mandate) was understandable, if still wrongheaded; no one liked the mandate penalty, even those who support the law otherwise. It's essentially the root canal of the ACA: Everyone hates it even if it did serve a useful purpose.

Obviously racism and tribalism has a lot to do with it as well--the ACA was passed not only entirely by Democratic-only votes, but by a black Democrat to boot! For millions of Republicans, that was a double blow and can't be tolerated; President Obama's signature accomplishment must be pulled out "root & branch" as Mitch McConnell put it...even though Obama hasn't been in office for nearly three years now.

However, there's another reason why they still won't let it go...and this one is far simpler:

The rich will likely receive billions in tax cuts if the health-care law is overturned, according to a new analysis published Monday from the Center on Budget and Policy Priorities, a Washington think tank.

The nation’s top 0.001%, the 1,409 U.S. households with annual incomes over $53 million, would receive a combined $3.8 billion in tax cuts if the law is overturned, according to the report.

That’s because overturning Obamacare would eliminate several taxes that were imposed to help pay for the law’s expansion, including a 0.9% Medicare tax on single Americans who earn more than $200,000 a year or couples who make $250,000, the report said.

A ruling against the health law would also eliminate a 3.8% Medicare surtax on net investment income for high-income filers — $200,000 for single filers and $250,000 for joint filers.

Most of these tax cuts would go to households with incomes over $1 million, who would receive tax cuts averaging about $46,000 apiece, according to the report.

That's it. It's really that simple: Rich people saw their taxes go up slightly to help pay for the ACA when it was signed in 2010, and for nearly a decade now they've desperately wanted those taxes to go back down again.

Even though, of course, they already received a massive tax cut in that very same 2017 GOP tax bill which zeroed out the ACA's individual mandate penalty...which in turn opened up the door for the Texas Fold'em lawsuit to potentially...strike down the ACA.

Here's just a small sampling of what the 1,409 wealthiest U.S. households (making up, again, not just the 1%, but the 0.001%) are willing to have happen in order for them to get their tax cut:

As for what would happen if the ACA is eventually repealed (remember, the 5th Circuit won’t hear the case until July, and I’d imagine an appeal to SCOTUS could take as long as another six months after that?), here’s a quick reminder:

…and that’s just for starters.