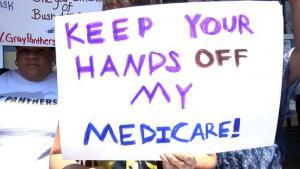 President Trump is scheduled to issue an order Thursday that expands the private-sector version of Medicare, as he slams some Democratic presidential candidates’ plans to build the program into a government-financed health system.

The order will direct federal health officials to make a set of changes to Medicare Advantage, the private managed care plans currently enrolling 22 million people — one-third of the participants in the federal insurance program for Americans who are 65 and older or have disabilities.

The changes are intended, in part, to give Medicare Advantage plans the option to cover a greater array of health-related services, such as adult day care. They also will foster long-distance “telehealth” that may be useful especially in rural areas. And they will revise enrollment procedures for people joining Medicare or renewing their membership so that the private health plans are presented as prominently as the traditional “fee-for-service” form of Medicare in which the program pays for patients to go to whichever doctors they choose.

To be honest, I'm not familiar enough with how Medicare Advantage works today vs. traditional Medicare to comment on this development as of yet, so in the meantime I'll just note, once again, that the 5th Circuit Court of Appeals is expected to issue their decision on the insane #TexasFoldEm lawsuit any day now. The U.S. Supreme Court will likely take up the case on appeal regardless of how they rule, but if the 5th does strike the law down, it's going to cause panic and confusion anyway...just ahead of the start of the 2020 Open Enrollment Period.

UPDATE: Welp. I was swamped with some other matters for most of the day, so I kind of missed out on Trump's latest ugliness, but others did a good job of summarizing it...and it's pretty bad:

Trump's executive order has some stealth provisions that would blow up Medicare as we know it. 1/https://t.co/Hjk7NSYy2N

This provision would spike the cost of Medicare. Because premiums are linked to cost, premiums would skyrocket for seniors:

(b) The Secretary, in consultation with the Chairman of the Council of Economic Advisers, shall submit to the President, through the Assistants to the President for Domestic and Economic Policy, a report within 180 days from the date of this order that identifies approaches to modify Medicare FFS payments to more closely reflect the prices paid for services in MA and the commercial insurance market, to encourage more robust price competition, and otherwise to inject market pricing into Medicare FFS reimbursement.

This provision is a fancy way of saying Medicare privatization. This is Paul Ryan's old plan. Learn more here: https://t.co/pHjkR3vbcI

(b) The Secretary shall study and, within 180 days of the date of this order, recommend approaches to transition toward true market-based pricing in the FFS Medicare program. The Secretary shall submit the results of this study to the President through the Assistants to the President for Domestic and Economic Policy. Approaches studied shall include:

(i) shared savings and competitive bidding in FFS Medicare;

(ii) use of MA-negotiated rates to set FFS Medicare rates;

If Democrats can't focus and weaponize this, god help us. We eviscerated Romney when he proposed Medicare privatization.

The new Executive Order includes a few provisions that would impact traditional Medicare,one of which aims to remove barriers to private contracting between patients & doctors. This could unravel financial protections & lead to higher (surprise) medical bills for Medicare patents

(b) Within 1 year of the date of this order, the Secretary shall identify and remove unnecessary barriers to private contracts that allow Medicare beneficiaries to obtain the care of their choice and facilitate the development of market-driven prices.

I hope it isn't the intent, but this reads like the goal of Trump's new EO is to make Medicare much, much more expensive by providing a huge windfall to hospitals -- by partially tying Medicare provider payment to what commercial insurance pays.

I've long thought this a possibility through CMMI authority, but the executive order also instructs the HHS Secretary to recommend approaches to move Medicare to a premium support/competitive bidding system. pic.twitter.com/eA3RUFODs9

Basically, it's bad news all around.