Cutting off your nose to spite your face: Study finds premiums are higher in GOP areas SPECIFICALLY due to their refusal to enroll in ACA plans 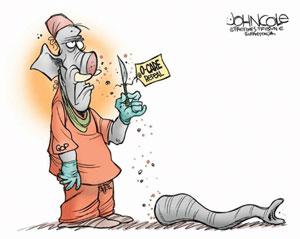 I've written about this in vague terms a few times in the past, but Samuel Trachtman, a Political Science PhD candidate at US Berkely, has just published a fascinating study on the impact of political partisanship on enrollment in ACA exchange healthcare policies:

Methods: Using data from Healthcare.gov at the rating area level, this article examines the association between Republican vote share and growth in ACA marketplace premiums, being careful to account for potential confounding variables.

Findings: Insurers have increased marketplace premiums at higher rates in areas with more Republican voters. In the preferred model specification, a 10-percentage-point difference in Republican vote share is associated with a 3.2-percentage-point increase in average premium growth for a standard plan. A variety of robustness and placebo checks suggest the relationship is driven by partisanship.

Conclusions: Partisan polarization can threaten the successful implementation of policies that rely on high levels of citizen participation.

The whole thing is about 30 pages and includes full documentation of methodology, controls for other factors and so forth. The key takeaway is pretty clear:

Moreover, individual-level differences in enrollment rates aggregate up to geographic differences. Holding other factors constant, Lerman, Sadin, and Trachtman (2017) estimate a 10-point difference in party vote share is associated with a 2-percentage-point increase in the share of the marketplace-eligible population in a given Public Use Microdata Area (PUMA) enrolling as of 2015.

In short, regardless of age, income level and other demographic factors, not only are people living in heavily Republican (red) areas paying around 3.2 percentage points more for ACA-compliant policies than those living in Democratic (blue) or swing (purple) areas...but the reason for that 3.2-point premium increase is due specifically to the fact that fewer of their Republican neighbors are signing up for those policies.

Put another way, Republicans are refusing to see a doctor about their cut-off nose to spite their blood-soaked faces.

However, the irony doesn't end there, due to the way that the ACA's subsidy formula works. As David Anderson notes:

The "benchmark policy" under the ACA is the 2nd lowest-cost Silver plan available in a given rating area. The benchmark premium is compared against the enrollee's household income. If the benchmark premium is higher than a given percentage of that premium (around 9.86% for someone earning 300-400% FPL, for instance), the difference between the two is the amount of the subsidy (which can be applied towards any ACA policy, not just the benchmark plan).

This means that as the official premium for the benchmark policy increases, so does the amount of subsidies I'm eligible for. If the benchmark goes up, say, 3.2% (using the main takeway from Trachtman's findings) to $619.20/month while my income/etc. stays exactly the same, my subsidy would also go up roughly 3.2% to $307/month, keeping my net premium at around the same $312/month as last year.

Here's the thing, though: That subsidy can also be used for Bronze or Gold as well...and Bronze/Gold won't necessarily increase by the same amount as Silver (especially with Silver Loading in play in most states since 2018).

Now let's say Bronze and Gold stay flat year over year while Silver goes up 3.2%. My subsidies increase by $19/month. Now I can get Bronze for $93, Silver for $312 or Gold for $493. Thanks to the adverse selection caused by other Republicans shunning the ACA exchanges, they've just reduced what I have to pay for a Bronze or Gold plan by $228/year. Yay!

This is what Anderson is referring to with his "more expensive = good for subsidized individuals" statement.

On the other hand, if I earn more than 400% FPL and am therefore not eligible for subsidies, all that happens in this scenario is...my premiums go up by 3.2% for the benchmark plan, from $600/mo to $619/month. If I'm middle-income, they just increased what I have to pay for a Silver plan by $228/year. Boo!

Middle-class Republicans in red areas are, by refusing to enroll in ACA plans, making things more expensive for themselves while simultaneously making them less expensive for the very lower-income folks who they presumably already consider "moochers". #Irony