The Subsidy Cliff Reckoning Is Here: Six Years of the ENTIRE Indy Market in One Graph 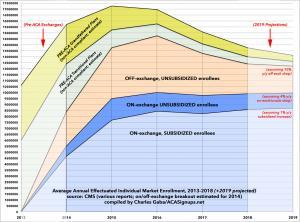 A couple of days ago, the Centers for Medicare & Medicaid (CMS) issued a press release which included a five-year effectuated enrollment report for the entire ACA-compliant individual market, both on and off exchange:

The Trends in Subsidized and Unsubsidized Enrollment Report

While data from the Effectuated Enrollment report shows stability in Exchange enrollment and premium trends, affordability remains a significant challenge for people who do not qualify for Exchange subsidies. These reports place a spotlight on the millions of Americans priced out of the market by the high premiums that quickly emerged after the Affordable Care Act’s main regulations took effect in 2014. The Trump Administration remains firmly committed to helping those harmed and providing every American with more affordable healthcare options.

Most of the above paragraphs are true except for two parts:

For years now, healthcare wonks across the country, including myself, have been urging Congress to fix various provisions of the Affordable Care Act. The single most important of these is the infamous Subsidy Cliff.

Once Again, in a nutshell, the Subsidy Cliff is this:

For the first few years of the ACA exchanges, this wasn't too much of a problem, as the full-price premiums weren't too bad. Average premiums increased each year, but the pre-ACA average premiums which those increases were based on were pretty low (since carriers were allowed to cherry pick enrollees and deny coverage to anyone who was "too expensive" to treat), so it was tolerable for middle-class enrollees earning between 400% and, say, 800% FPL. People grumbled, of course, but for the most part the unsubsidized market (which is mostly off-exchange) grew, from 3.7 million in 2014 to over 6 million in 2015 before peaking at 6.3 million in 2016.

Starting in 2017, however, premiums increased sharply (by nearly 25% on average), mainly due to the ACA's federal reinsurance program, which helped restrain rate hikes, sunsetting. This, combined with sabotage and confusion caused by the Trump Administration and Congressional Republicans throughout the year, resulted in total on-exchange enrollment dropping by over 465,000 people during the 2017 Open Enrollment Period...and total ACA-compliant enrollment dropped by nearly 1.5 million by the time the year ended. Of that, 86% were unsubsidized enrollees (and 84% of whom had previously been on the off-exchange market, where no one is eligible for financial assistance).

In 2018, full-price premiums spiked even more dramatically, by around 27% on average. While the reasons for the 2017 hikes were a mixed bag, this time the primary blame fell squarely on the Trump Administration's decision to cut off Cost Sharing Reimbursement payments. This set off a chain reaction of responses by the insurance carriers and state regulators, but the bottom line is that a good 3/5ths of the 2018 premium increases was due specifically to Trump Admin actions.

As a result, on-exchange enrollment dropped another 466,000 people during Open Enrollment...and total monthly average unsubsidized enrollment (both on & off-exchange) dropped by another 1.2 million people. At the same time, this was partly offset by a 4.2% increase (nearly 350,000) in subsidized enrollees, for a final net loss of almost 890,000 people from the overall ACA market.

Between 2017 and 2018, a total of just over 2.5 million unsubsidized enrollees have fled the ACA-compliant individual health insurance market...while subsidized enrollment has grown by a net of 143,000 people.

The reason for this is pretty obvious. There have been some measures taken to mitigate the problem: Silver loading and silver switching is being widely used to offer some relief to off-exchange enrollees, and some states have instituted their own state-level reinsurance waiver programs to cut full-price premiums down to size...but the bottom line is that even with these programs, unsubsidized premiums are simply too high for too many people.

The Trump Administration's "solution" to this problem has been to open the floodgates on non-ACA compliant "healthcare plans" ranging from pushing for bare-bones "Short-Term, Limited Duration" plans (by making them no longer short-term or of limited duration); "Association Health Plans" (which have a long, ugly history of fraud and abuse); "Sharing Ministries" (some of which are legitimate, but which are still open to massive misrepresentation and fraud problems), and so forth.

These types of offerings, many of which are accurately described as "junk plans", have exactly the types of problems the ACA was trying to reduce or eliminate in the first place. EXPANDING them is not the answer.

The ACTUAL solution to this--assuming you're not talking about a complete overhaul of the entire system--is obvious: KILL THE SUBSIDY CLIFF.

Removing the 400% FPL cap on financial assistance and instead limiting premiums to no more than 9.8% (or better yet, 8.5% as laid out in H.R. 1868) regardless of income would instantly eliminate nearly all of the "demand" for any of these non-ACA compliant policies in the first place. Millions of middle-class Americans would suddenly see Affordable Care Act policies become...Affordable again. This doesn't just include the 2.5 million who have left the market over the past two years...it also includes millions who never bothered signing up in the first place due to their ineligibility. My guess is that passing this one bill into law would single-handedly increase ACA exchange enrollment by a good 7-8 million people or more:

In any event, the table below breaks out the total average monthly ACA-compliant individual market enrollment in every state from 2014 - 2018...and even includes estimated projections for 2019. Each year has been further broken out between subsidized, on-exchange unsubsidized and off-exchange unsubsidized enrollees.

Most of the data below comes from CMS's Trends in Subsidized and Unsubsidized Enrollment report. The breakout between on & off-exchange subsidized enrollment comes from previous CMS reports and Public Use Files. CMS chose not to include data for either Massachusetts or Vermont because these states have merged their individual and small group market risk pools. I understand why they did so, but it still makes more sense to me to include them in order to present a fuller picture, so I've plugged in effectuated enrollment data for MA & VT whereever possible. There's still some blank fields, but these two states combined represent only about 2% of the total ACA market, so any impact from including them should be nominal. Unfortunately, while I have the breakout for on-vs-off exchange enrollments nationally, I'm still missing the state-level data from 2014 & 2015.

With all this in mind, I present Six Years of ACA Individual Market Enrollment in a single (massive...click on it for a high-res version) table...followed by a graph version, which also includes my best estimates of the "Grandfathered" and "Transitional" market enrollment left over from before the ACA plans went into effect in 2014. The Grandfathered/Transitional lines are roughly based on estimates by the Kaiser Family Foundation, as well as my own educated guesses for 2018 & 2019. 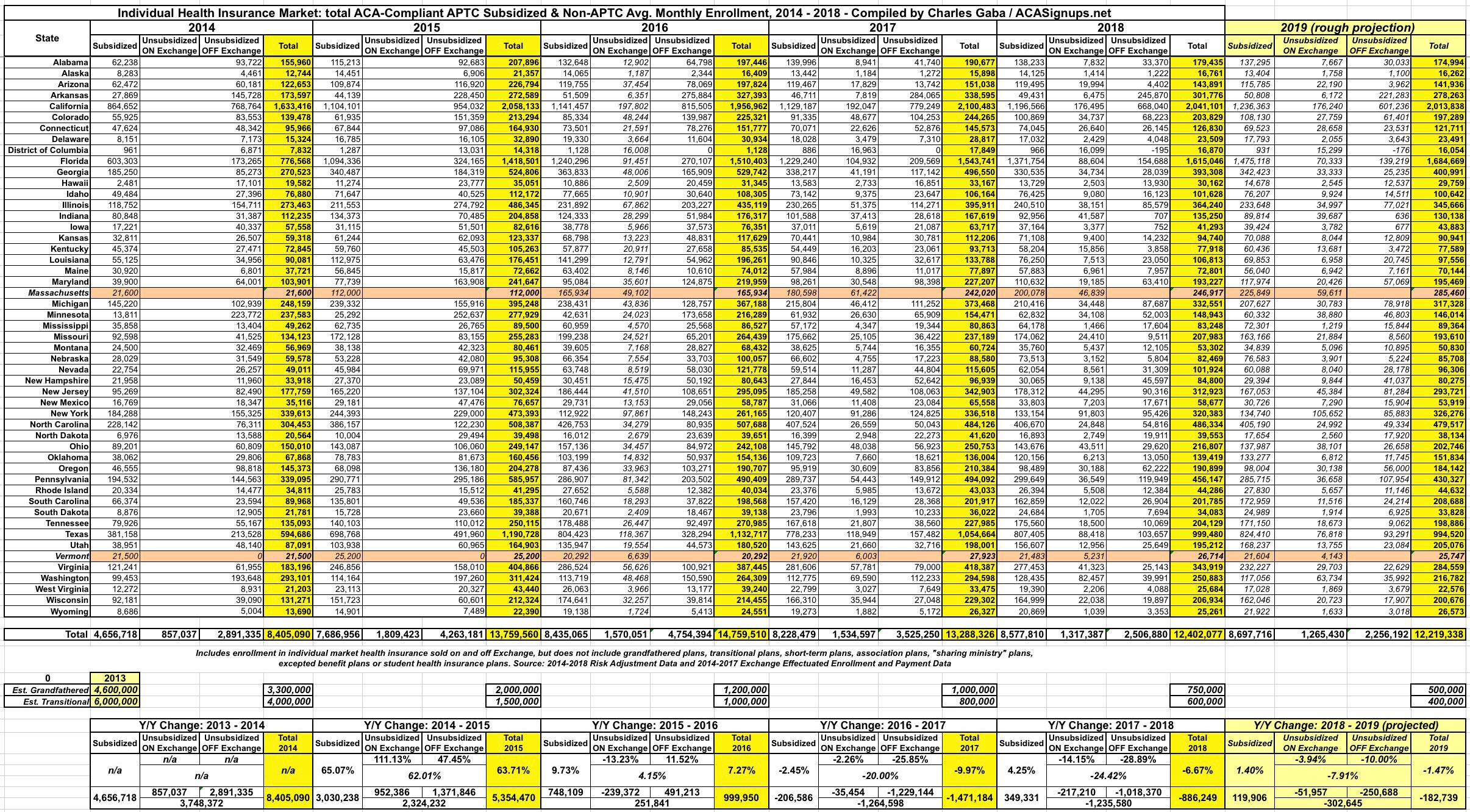 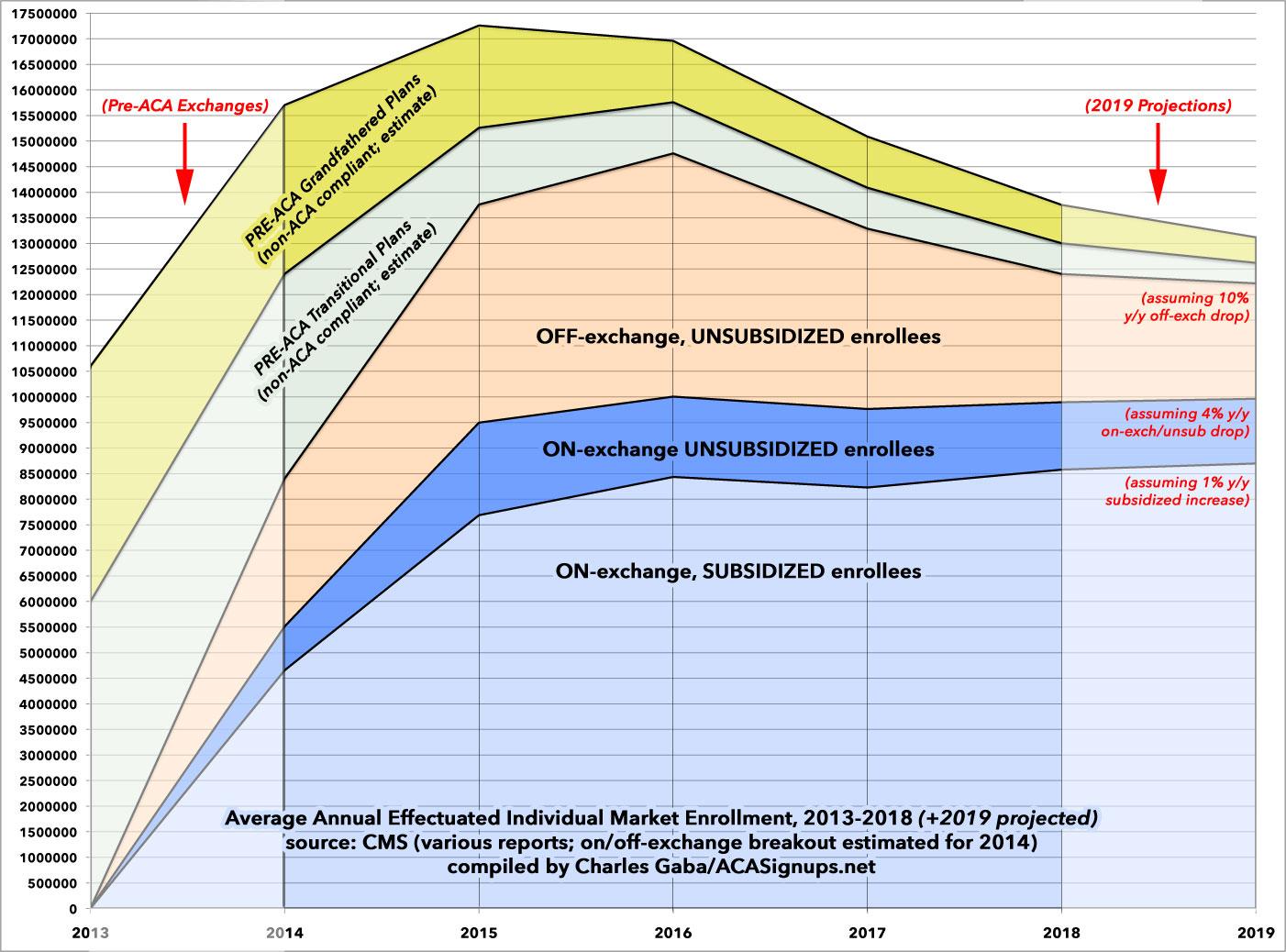