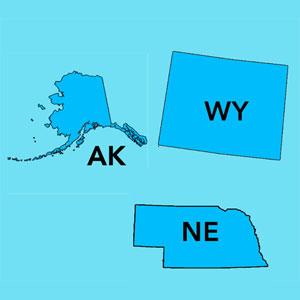 The floodgates are now officially open for preliminary (not final) 2020 ACA rate filings for both the Individual and Small Group markets. There are several states which only have a single insurance carrier offering policies on the Individual Market, which makes it very easy to calculate the weighted average rate changes...seeing how a single carrier holds 100% of the market.

Among these states are Alaska, Nebraska and Wyoming, where the sole Indy Market carriers are once again Premera BCBS (AK), Medica (NE) and BCBS of Wyoming. Unfortunately, the rate filing forms for all three are partly redacted, making it impossible for me to determine how many total enrollees they have, although I have a pretty good estimate of the on-exchange number as of the end of March for each.

In Alaska, Premera's 2020 rates are virtually unchanged year over year. In Nebraska, Medica expects to reduce rates an average of 5.3%. And in Wyoming, BCBS is only looking to bump up average unsubsidized premiums by 1.6%.

I've also thrown in the Small Group market for all three states, although I didn't bother trying to dig up the enrollment numbers and therefore don't have weighted averages for any of them; the unweighted average Sm. Group hikes are 1.3%, 12.8% and 9.9% respectively.