UPDATE: Bernie rolls out his NEW Medicare for All bill...what's different this time? 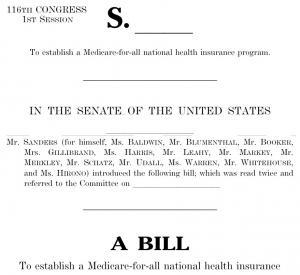 In September 2017, Sen. Bernie Sanders introduced his "official" Medicare for All, universal single payer bill to much fanfare. At the time, it garnered a lot of attention, but it also had some gaping holes...most notably the lack of any actual funding mechanism or specifics, as well as a big coverage gap which could be found in both the "Medicare for America" bill which I'm a big fan of as well as the House MFA version.

Today, Sanders launched a revised version of the bill which supposedly addresses both of those issues along with others. Let's take a look.

First of all, who's co-sponsoring it? In 2017, it was cosponsored by 16 Democratic Senators:

In 2019, it's down to 13. One of those doesn't count since Al Franken resigned, but it looks like Martin Heinrich (NM) and Jeanne Shaheen (NH) have bailed:

UPDATE: Hmmmm...thanks to Colin Seeberger for calling my attention to this: Apparently Martin Heinrich is still cosponsoring the new bill after all...his name isn't listed on it, but it's listed in Sanders' press release:

OK, I do give Sanders credit for finally baking in actual funding mechanisms into the legislative text!

It’s in a financing white paper released by his office

The "ending health tax breaks" bit is cute, since, as Kapur notes...

Notable that Bernie Sanders’ plan ends the tax break for employer-based coverage, which single payer would hollow out anyway. It’s currently the most expensive tax expenditure and costs the Treasury $172.8 billion per year (JCT FY2019 est).

Nothing wrong with this, actually: Both Sanders and Kapur are correct that employer-sponsored insurance tax breaks heavily subsidize the ~155 million who currently are covered that way...although very few realize that.

The big question Sanders doesn’t answer: How do you pay for it?

The Sanders plan goes into great detail on what kind of coverage a universal plan ought to offer. But it does significantly less work explaining how this would be paid for. Instead, Sanders’s office released a paper that included this bullet-point list of possible options:

Instead of reading through the exact text of the bill, for now let's take a look at the summary:

TITLE I—ESTABLISHMENT OF THE UNIVERSAL MEDICARE PROGRAM
Establishes a national health insurance program for every resident of the United States, including the District of Columbia and the territories. Provides for patient freedom of choice among providers. Creates an enrollment mechanism and provides for issuance of health insurance cards. Effective date of benefits: four years after the date of enactment (starting January 1 of that year)

States may provide additional benefits at their expense.

Institutional long-term care coverage for seniors and people with disabilities will continue as it is currently covered under Medicaid, complete with a maintenance of effort provision; no one receiving benefits through Medicaid or any other federal or state health program will lose support. Separating home-and-community-based services from institutional services will allow us to erase the current institutional bias and ensure people are allowed to choose the setting which suits them best.

There it is: He's indeed added LTSS into the mix, matching both Medicare for America and the House version of the MFA bill.

TITLE III—PROVIDER PARTICIPATION
Requires all providers to sign a participation agreement, which includes nondiscrimination on the basis of race, color, national origin, income, religion, age, sex or sexual orientation, gender identity, disability, handicapping condition, or illness (subject to the provider’s scope of practice). Participation agreements may be terminated by the agency for cause, or by the provider for any reason. Providers shall be considered qualified if they are properly licensed and certified under State and federal law to provide such services. The agency shall establish and maintain national minimum provider standards. Allows providers to enter into private contracts with individuals for services otherwise covered by this Act as long as the individual pays fully out of pocket.

I'm not sure whether this last bit is new or not, but it basically just means that doctors who refuse to participate in the program at all (which I admit to being a bit confused by given the first sentence) are allowed to provide healthcare services as long as the patient is willing to pay 100% cash. In other words, concierge medicine for the rich will indeed be allowed.

TITLE IV—ADMINISTRATION
Establishes a Universal Medicare Agency to oversee and administer this Act, within the Department of Health and Human Services. The agency shall be headed by the Secretary of HHS and 6 other individuals, subject to Senate confirmation. Requires the agency to consult with all relevant stakeholders when formulating guidelines and regulations. Provides for regional and state administration. Provides for a Beneficiary Ombudsman to assist individuals enrolled in the Act, and an Inspector General for the Board. Applies all current Medicaid fraud provisions to this Act.

In other words, there would still be bureaucrats deciding the limits of what is or isn't covered...it's just that they'd be government bureaucrats instead of insurance company bureaucrats. I don't mean this as either an attack or defense of "bureaucratic meddling", just noting that it'd still be a thing.

Again: Coverage and practices would still be up for review and modification.

TITLE VI—BUDGET AND COST CONTAINMENT
Requires the agency to create an annual budget, which shall include the cost of covered health services; quality assessment activities; health professional education expenditures; administrative costs; innovation; operating and other expenditures; capital expenditures; and public health activities. For the first five years following the date of enactment, the budget may also provide transition assistance to health insurance administration workers who may be displaced because of the implementation of this Act. Provides for a reserve fund to anticipate natural disasters or other such public health emergencies. Continues current Medicare payment methods, including alternative payment models established under ACA and MACRA. Requires the agency to negotiate the price of prescription drugs and establish a formulary. Gives patients and providers the right to petition to have drugs placed on or off the formulary. Provides a means of access for patients who need off-formulary medications.

The "5 years for displaced workers" bit refers to the 2.7 million people currently employed directly or indirectly in the health insurance industry today, of whom half a million work directly for health insurance companies.

The 2.7 million figure includes other types of insurance (life, auto, homeowners), but many insurance companies sell more than one type of insurance, so 2-3 million seems like a good estimate when you include related businesses.

This is the closest that the bill apparently comes to actually stating how it would be funded:

"Bans the Hyde Amendment" is a pretty dismissive way of referring to what will no doubt be an epic Battle Royale no matter what universal coverage plan we eventually end up with.

Hmmm...this section is completely blank in the summary for some reason. Here's the actual legislative text for Title 8...make of it what you will:

SEC. 801. PROHIBITION OF EMPLOYEE BENEFITS DUPLICATIVE OF BENEFITS UNDER THE UNIVERSAL MEDICARE PROGRAM; COORDINATION IN CASE OF WORKERS’ COMPENSATION.

‘‘(a) IN GENERAL.—Subject to subsection (b), no employee benefit plan may provide benefits that duplicate payment for any items or services for which payment may be made under the Medicare for All Act of 2019.

‘‘(b) REIMBURSEMENT.—Each workers compensation 25 carrier that is liable for payment for workers compensa- 61 TAM19490 S.L.C. 1 tion services furnished in a State shall reimburse the Uni2 versal Medicare Program for the cost of such services.

(b) CONFORMING AMENDMENT.—Section 4(b) of the Employee Retirement Income Security Act of 1974 (29 25 U.S.C. 1003(b)) is amended by adding at the end the following: ‘‘Paragraph (3) shall apply subject to section 2 522(b) (relating to reimbursement of the Universal Medicare Program by workers compensation carriers).’’

(c) CLERICAL AMENDMENT.—The table of contents in section 1 of such Act is amended by inserting after the item relating to section 521 the following new item: ‘‘Sec 522. Prohibition of employee benefits duplicative of Universal Medicare Program benefits; coordination in case of workers’ compensation.’’.

(4) The table of contents in section 1 of the Employee Retirement Income Security Act of 1974 is amended by striking the items relating to part 6 of subtitle B of title I of such Act.

SEC. 803. EFFECTIVE DATE OF TITLE. The amendments made by this title shall take effect on effective date of benefits under section 106(a).

TITLE IX—RELATIONSHIP TO EXISTING FEDERAL HEALTH PROGRAMS
Provides for a transition from Medicare, Medicaid, FEHB, SCHIP, and any other federal health insurance program into the Universal Medicare Program. Requires VA and IHS to stay independent for the first ten years of the program, with an evaluation at the end to determine if the systems need to stay independent. Requires HHS to consult with tribal leaders and stakeholders before making any determination with respect to the Indian Health Service.

I think the "ten year" part is a change from the prior version, which just left the VA and IHS exactly as is permanently. It's worth noting that both the old and new Senate versions of the bill are not technically "universal", in that they leave roughly 2.2 million people enrolled in the IHS and 9 million covered by the VA out of the program.

Yes, this may be splitting hairs given that both the IHS and VA are still taxpayer funded, but the point is that even Sanders recognizes that not every population's healthcare service needs are exactly the same.

TITLE X—TRANSITION
Provides for a four-year phase-in. Establishes a Medicare Transition Plan to allow Americans to buy into the Medicare program during the transition. Lowers the Medicare age to 55 in year one, 45 in year two, and 35 in year three. Adds new dental, vision, and hearing benefits to Medicare in year one. Lowers Medicare out-of-pocket costs in year one and eliminates the Part A and Part B deductibles. Eliminates the two-year waiting period for Medicare coverage for individuals with disabilities. Provides for continuity of care for persons with private health coverage to ensure a smooth transition.

He's sticking with the 4-year, age-based transition period. This is one of the biggest differences between MFA and Medicare for America, which is phased in based on type of current coverage instead of age.

Honestly, while I'm sure there are some other differences between the old and new Senate version, it looks like the LTSS addition is by far the biggest one.