Mitt Romney falsely claims Obamacare "only applies to 20-25% of the population"; Chuck Todd fails to correct him 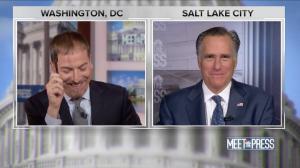 Meet the Press a few hours ago:

CHUCK TODD: Let me move to health care because to me, it's an even more trickier situation, given that you won re-election I believe, excuse me, you won election in Utah on the same ballot that a majority of -- of your constituents wanted to see Medicaid expanded. So what would you do now with health care? Would you scrap the system we have and build from scratch? Or do you take the Obamacare infrastructure, which many will note was modeled in some ways off of what you did in Massachusetts, and try to reform from there?

SEN. MITT ROMNEY: Well, let's begin by putting it in context, which is Obamacare applies to about 20, maybe 25% of the population because for 75 to 80% of the population we get our insurance through our employer or through Medicare or through traditional Medicaid. So Obamacare is just 20, 25% of the population. And right now with Obamacare, that's a federal program. I think what you're going to see from Republicans is a federal-state partnership, where the federal government sets the parameters and the states are given more flexibility to create ways to care for their own low income individuals. And so I think a federal-state partnership is a much wiser way to go. A number of senators are working on those kind of ideas. I know the White House is as well. And I think you're going to see proposals coming from our side that say, "Look, we can make the current system of private insurance, which 75, 80% of Americans have, we can keep that in place, get costs down, more flexibility. And Obamacare needs to be repealed." And by the way, the Democrats agree with us. They agree with us on getting rid of Obamacare because they're calling for Medicare for all.

(sigh) OK, let's start with the biggest facepalm moment: The Affordable Care Act...otherwise known as "Obamacare"...applies to some extent to nearly 100% of the population.

The Affordable Care Act (ACA) included a provision to phase out the coverage gap by gradually reducing the share of total drug costs paid by non-LIS Part D enrollees in the coverage gap, from 100 percent before 2011 to 25 percent in 2020. The ACA required plans to pay a gradually larger share of total drug costs, and also required drug manufacturers to provide a 50 percent discount on the price of brand-name drugs in the coverage gap, beginning in 2011. The ACA stipulated that the value of this discount would count towards a beneficiary’s annual out-of-pocket spending.

The ACA also modified the calculation of the annual out-of-pocket spending threshold between 2014 and 2019 so that the threshold amount would grow more slowly during these years (Figure 2).

OK, that brings us up to 73 million people who the ACA "applies" to, or around 22% of the total U.S. population. If that's all the ACA did, it would indeed fall into Romney's 20-25% claim (which is still a huge portion of the population, I should note, so I'm not quite sure why he thinks this helps his case). HOWEVER, many ACA protections also apply to the 155 MILLION PEOPLE with employer-sponsored insurance:

...The ACA — otherwise known as Obamacare — changed all that. Small-group premiums can only vary based on age (with a maximum 3:1 ratio for older adults compared with younger adults), family size, geographical location, and tobacco use. These same rules apply in the individual market.

All new small-group plans must also cover the ACA’s essential health benefits, and must conform to metal level classifications based on actuarial value. Out-of-pocket costs must be capped at no more than $7,150 for an individual employee ($14,300 for family coverage) in 2017, and young adults must be allowed to remain on a parent’s policy until age 26.

And insurers can no longer impose minimum-participation requirements for large groups, which used to be an obstacle for some employers. If a large employer applies for coverage, the insurer must accept their application. But large employers are also more likely to self-insure: for employers with 500 or more employees, 80 percent were self-insured in 2015.

Under the ACA, all employers with 50 or more full-time equivalent employees are required to offer affordable, minimum value health insurance to their full-time (30+ hours per week) employees. The vast majority of large employers already offered coverage prior to the ACA, but the ACA imposes a tax penalty on large employers who don’t offer coverage if they have employees who end up getting subsidized coverage in the exchange instead. And the law includes more regulations in terms of how much employees can be required to pay for their coverage, and how robust the coverage must be.

OK, so that's actually a good 228 million people who the Affordable Care Act "applies to", or over 70% of the country. However, it's actually more than that, because the other 30% include those on non-ACA Medicaid & CHIP (perhaps 58 million people), as well as those who are currently uninsured (around 30 million), since as their circumstances and incomes change, millions of them will end up moving onto either the individual market, the small group market, the large group market, expanded Medicaid or will age onto Medicare, at which point the ACA provisions listed above (and more...I didn't include everything) would apply.

For that matter, there's also the 3-4 million people enrolled in non-ACA Medicaid thanks to the ACA, otherwise known as the "woodworker" population, because they "came out of the woodwork" to enroll in the program thanks to the streamlined enrollment process, increased awareness campaign and reduction of stigma which used to be attached to Medicaid. One can argue whether or not that should "count" of course; I think it should. In any event the ACA also improved and strengthened traditional Medicaid in other ways as well.

Frankly, there's only two groups of people who I'd say the ACA might arguably not "apply to":

If you use a strict interpretation of "applies to", I suppose you could say that perhaps 3.6 million U.S. citizens living in the Territories and maybe 8 million (?) undocumented immigrants are completely left out...which would mean the ACA still "applies to" over 96% of the population.

ASIDE from that, Romney's other claim about how "the Democrats agree with them" regarding "getting rid of Obamacare" in favor of Medicare for All is absurdly disingenuous.

The original implementation of the Affordable Care Act was never intended to be the end product. It was always intended to be modified and improved going forward (which the GOP has refused to let happen for the past 9 years), but beyond that, it was not intended to be the end all, be-all of healthcare policy. Obama himself repeatedly stated that if someone can come up with a different healthcare system which is better than the ACA, feel free to go for it.

So while I've been pushing hard for major improvements to the ACA via a robust "ACA 2.0" bill for years now, that is in no way inconsistent with also supporting the Next Big Thing®, namely a true universal healthcare coverage system to replace the ACA a few years down the road. I, of course, prefer the Medicare for America bill, while others are die-hard Medicare for All proponents.

So, what did Chuck Todd--who, remember, is not only the moderator of Meet the Press but also the political director for NBC News--say in response?

CHUCK TODD: Not all Democrats do--

SEN. MITT ROMNEY: Medicare for all wipes out Obamacare.

Annnnnnnd...that was it. As an aside, one other comment re. the next exchange:

CHUCK TODD: No, the irony's not lost. I'm waiting for Republicans to start defending Obamacare as things move on, honestly. I want to ask you though about the Medicaid decision by your constituents. The legislature wants to tighten what your constituents wanted. Is that the right call?

This is also absurd. The ACA very specifically states that the ACA will cover no less than 90% of the cost of Medicaid expansion. Yes, it's conceivable that this could be lowered in the future...but only if Republicans decide to do so. Furthermore, if that were to happen, I'm pretty sure the states would be freed from their obligation to cover the expansion population altogether. Obviously there'd be political hell to pay locally if that happened...but that would be on the GOP alone since they'd be the ones who would have broken the promise, not the Democrats.