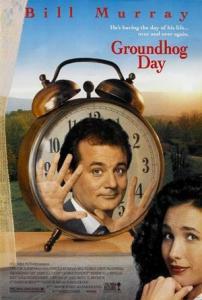 I swear to God, Thanos must have invoked the Time Stone, because we’re right back to two years ago with this crap. I could just re-promote old blog entries from April 2017 and no one would know the difference:

The White House is quietly working on a healthcare policy proposal to replace the Affordable Care Act, according to multiple sources with knowledge of the matter.

...The analyst said the administration has been “having conversations” on healthcare policy and has reached out to numerous think tanks, including the Heritage Foundation, the Mercatus Center, and the Hoover Institute.

Ah, yes: The Heritage Foundation. You know, the same guys who originally came up with what would eventually become known as RomneyCare...which in turn was the model for ObamaCare, aka the Affordable Care Act, at which point both the Heritage Foundation and Mitt Romney insisted that they had nothing whatsoever to do with the Affordable Care Act because it was implemented by a black Democrat instead of a white Republican. Those guys.

...Policy leaders at several conservative think tanks confirmed to the Examiner that a healthcare plan is indeed the works. They said a proposal would take concepts from the Graham-Cassidy bill, by Sen. Lindsey Graham, R-S.C. and Sen. Bill Cassidy, R-La., and the Health Care Choices proposal, which was signed by many conservative policy leaders, including the Heritage Foundation and former Sen. Rick Santorum, R-Penn. One analyst said a White House proposal would most likely be brought up in the Senate first.

Lovely. We're back to privatized block grants and health savings accounts for people who don't have the money to save in the first place. Lovely.

“I don’t think there’s anything that’s fully formed,” the analyst said. “I think a lot of the devil’s in the details.”

A spokeswoman for Republican Rep. Bruce Westerman, Ark., who has announced his own wide-ranging health reform plan, confirmed that the White House is “serious” about working on health care, but she said she thought lawmakers would take the initiative on the issue.

“Most likely, the effort will be from Congress,” she said.

That's pure Donald Trump: Create an ugly mess and then demand that other people clean it up for him.

Trump has already asked a group of Senate Republicans, including John Barrasso of Wyoming, Rick Scott of Florida and Cassidy to come up with a replacement for Obamacare. But other Senate Republicans, including Sens. Roy Blunt of Missouri, John Kennedy of Louisiana and Majority Leader Mitch McConnell, have indicated an unwillingness to get moving on the issue until Trump puts forth his own proposal.

Oh goodie. Rick "Largest Medicare Fraud Case in History" Scott and Bill "Lie Through His Teeth to Jimmy Kimmel about CHIP" Cassidy are on the case. This should go well.