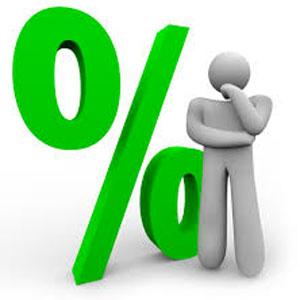 When it comes to discussing changes in healthcare policy, one of the most important--and most frustrating--topics which have to be tackled is how much healthcare services actually cost. I'm not necessarily talking about how much the patient pays, although that's obviously important as well...I'm referring to how much the healthcare providers charge and get paid.

Doctors, hospitals, clinics, pharmaceutical companies, medical device makers and so forth all get paid different amounts for different services from different payors, depending on whether it's a private insurance carrier, Medicare or Medicaid...and those rates generally range widely from state to state and carrier to carrier. One partial exception to this is Maryland, where they've been experimenting fairly successfully with a concept called "all-payer" rate setting:

Since the late 1970s, Maryland has operated an all-payer system for hospital services. An independent commission establishes the rate structure for each hospital. That eliminated hospital cost shifting across payers and spread more equitably the costs of uncompensated care and medical education and limited cost growth, but per capita Medicare hospital costs are among the country's highest. It appears that the system eliminated price competition between hospitals and led them to divert high-cost patients to alternative settings, where prices remained unregulated.

...On January 10, 2014, the Centers for Medicare and Medicaid Services(CMS) and the State announced a new model that will focus on overall per capita expenditures for hospital services as well as on improvements in the quality of care and population health outcomes. For 5 years beginning in 2014, Maryland will limit the growth of per capita hospital costs to the lesser of 3.58% or 0.5% less than the actual national growth rate for 2015 through 2018. The change is forecast to save Medicare at least $330 million. 3.58% is Maryland's historical 10-year growth rate of per capita gross state product.

However, for the rest of the country, there's still an insane array of pricing for everything under the sun healthcare-wise.

One of the key requirements for any sort of universal, government-paid for healthcare system is to have strict controls on how much is actually paid to healthcare providers. Otherwise there'd be almost no limits to how much they could charge, since they'd know that the government would be legally required to pay the bill. This is why Medicare and Medicaid have restrictions on how much they're willing to reimburse providers.

The general rule of thumb is that Medicare pays providers less than private insurance carriers do, and Medicaid pays them even less yet...but just as the amount carriers pay can be all over the map, how much less is paid by Medicare and Medicaid also varies widely across a variety of factors.

For years now, when talking about this subject (either via blog posts, twitter threads, in-person slideshows or my occasional video explainers), I've generally used 80% and 50% as my rough, ballpark estimates when it comes to how much Medicare and Medicaid reimburse healthcare providers. That is, I've assumed that Medicare pays providers, on average, roughly 80% as much as private insurance does, while Medicaid generally pays only around half as much.

I'm not sure precisely where I got those estimates, though I think the 80% Medicare number came from this article in Vox by Matthew Yglesias:

It turns out that Medicare uses this trick, too, offering doctors only about 80 percent of what private insurance plans pay them.

The downside to Medicare paying just $426 on average for a colonoscopy when private plans offer $639 is that as a result, some doctors refuse to see Medicare patients. This is particularly something you see in large, dense, rich cities like New York or Boston where medical practices that can manage to get themselves written up on magazine "Best Doctors" lists can afford to be choosy about their patients.

But to the average health care provider, the Medicare patient market is just too big to ditch. Doctors — and hospitals and everyone else — take what they get and are glad for it.

Yglesias' 80% figure came from this CNN/Money article. However, that article is from 2014, and it's a single source, so I decided to do a bit more looking around today to see whether the situation has changed (or whether that was simply an inaccurate estimate). When I did, I received a lot of feedback...much of it confusing and sometimes contradictory. Here's some key Tweets from a Twitter thread/discussion I had with various healthcare wonks this morning (I've reformatted them into simpler bullets to save space):

...and so on. I also found a couple of other reliable sources (reports from the Congressional Budget Office and the Kaiser Family Foundation):

Larry Levitt is about as trustworthy a source as I can think of for this sort of thing. Here's the key points from the 2017 CBO article:

In the physicians report, CBO analyzed three private payers — Aetna, Humana and UnitedHealthcare — which cover 39 million people across all 50 states. The three payers make up 25% of Americans with employer-based insurance and 50% of Medicare Advantage beneficiaries.

CBO reviewed 21 frequent and costly services. CBO found private insurance pays physicians much more than Medicare, particularly for brain MRIs, intensity-modulated radiation therapy, abdominal MRIs and knee arthroscopy. The highest physician payments for those services were at least 350% higher than Medicare payments. The average for those procedures was more than 200% higher for private payers compared to Medicare.

The report also said private insurers’ physician pay varies greatly and can be “based on physician competition” and "physician-hospital vertical integration.”

In the hospitals report, CBO examined the payment rates for hospital inpatient services for private insurers and Medicare Advantage plans and compared them to Medicare FFS rates. CBO used the same payers in the hospital report.

CBO found the average commercial payment rate for hospital admission was $21,400 in 2013, compared to $11,400 for a Medicare FFS patient, which was slightly more than for a Medicare Advantage patient ($10,700). Private insurance rates were 89% higher on average than Medicare FFS rates, according to CBO.

Yeesh. That's a pretty wide array, but as I noted on Twitter, it sounds to me like the average hovers around perhaps 80-85% more for private insurance than Medicare, give or take...which translates into Medicare paying somewhere in the 55-60% of private insurance range.

Meanwhile, the Kaiser link I mentioned includes this table, comparing the relative reimbursement rates of different types of Medicaid services to Medicare on a state-by-state basis. Overall, Kaiser pegs the nationwide average at around 72% as of 2016...which, assuming Medicare averages around 55-60% of private insurance, translates into around 40-45% as much as private insurance for Medicaid. 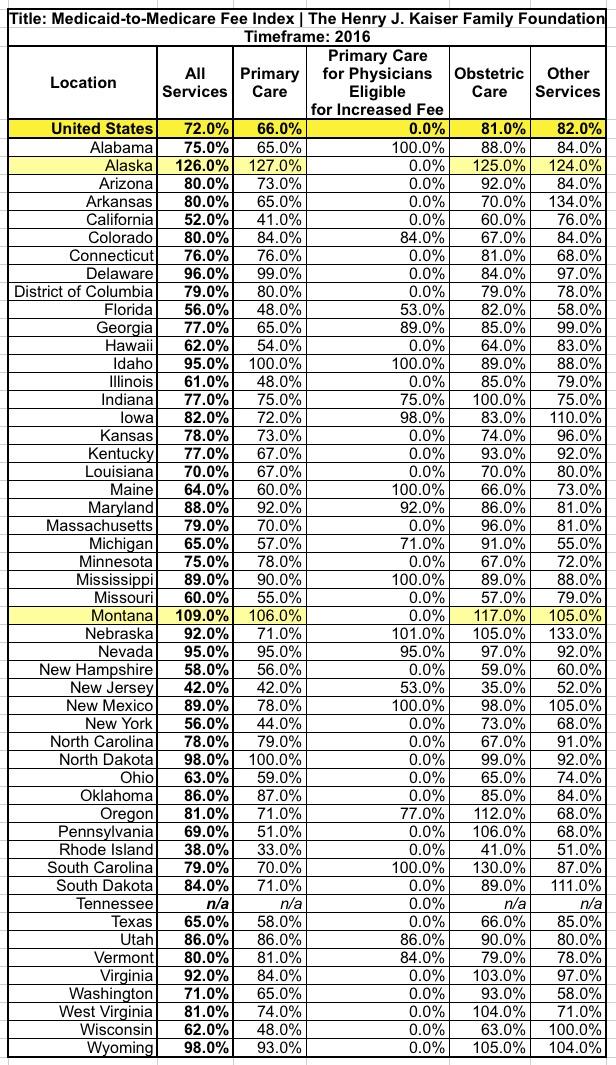 The other noteworthy thing is that there are two states (Alaska and Montana) where Medicaid actually reimburses providers at a higher rate then Medicare does. Huh.

It’s important to keep in mind that, on average, private insurance pays 144% of what it costs to provide care in hospitals, according to the American Hospital Association. https://t.co/mEWjKbtqxx https://t.co/UGGyFqcGa3

Using Baillio's figures, if a given procedure's official cost is $1,000, private insurance actually pays around $1,440 on average, versus around $890 for Medicare and $900 for Medicaid after supplemental payments are added in. So Medicaid may officially only pay the hospital around, say, $650 initially (~45% as much as private insurance), but the hospital will eventually be paid another $250 or so, bringing it up to around the same level as Medicare.

I admit to being somewhat confused about why this is the case...it seems like it'd be easier all around to simply increase Medicaid rates to match Medicare in the first place, which would cost exactly the same overall but would eliminate the need for any "supplemental payments"...but there are two reasons I can see for not doing that:

Here's a segment from the report Baillio linked to (also from the Kaiser Family Foundation, I should note):

...Like other public payers, Medicaid payments have historically been (on average) below costs, resulting in payment shortfalls. 1 However, hospital payment rates are often bolstered by additional supplemental payments in the form of Disproportionate Share Hospital Payments (DSH) and other supplemental payments. After accounting for these payments, many hospitals receive Medicaid payments that may be in excess of cost. Understanding how much Medicaid pays hospitals is difficult because there is no publicly available data source that provides reliable information to measure this nationally across all hospitals. Different data sources use different definitions of what counts as payments and costs, so estimates are sensitive to these data limitations.

In any event, it sounds like I'm going to have to modify my prior "80% Medicare, 50% Medicaid" rule of thumb into something a bit more complex:

I may modify this a bit, but it sounds reasonable for use to make general points about reimbursement rates and sweeping healthcare policy change impact, anyway.