Ted Cruz's amendment is even more cruel and evil than I expected. 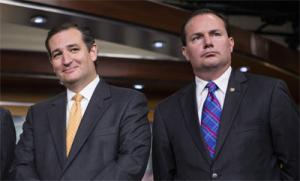 Larry Levitt of the Kaiser Family Foundation noticed this within minutes of the latest "Cruz-Lee" version of BCRAP being released last week...

...and Topher Spiro of the Center for American Progress points out the relevant text here:

Here's the part of the Senate bill that admits Cruz subprime junk insurance is not health insurance at all. Oops! pic.twitter.com/EZ3t5hObYl 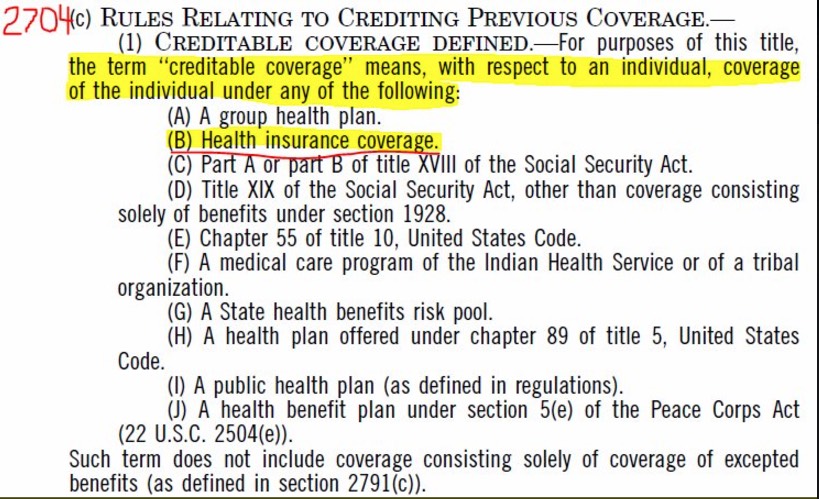 What does this mean? Simple: The Senate GOP is openly and officially admitting, point blank, that the "policies" which would be offered under the "Cruz Amendment to the BCRAP bill wouldn't be considered "health insurance coverage" even by them:

As the insurers note, the Cruz amendment is liable to lead to a situation where healthy people overwhelmingly congregate on the cheaper plans, and insurers have to jack up premiums for the sicker people who remain on the more comprehensive plans.

Meanwhile, there’s another big problem with the provision. In order to encourage people to stay insured, the Senate bill would prevent people whose “creditable” health insurance coverage lapses for 63 days from purchasing insurance again for six months.

But the bill also does not consider the bare-bones plans “creditable,” according to Timothy Jost, a health policy expert at Washington and Lee University School of Law.

On its face, that would mean a person could violate the prohibition on lapsed coverage the moment he or she leaves one of the bare-bones plans, because the person would most likely have been without “creditable” coverage for more than 63 days.

Now, to be clear, on the surface this isn't that different from the rules under the Affordable Care Act: If you're enrolled in a short-term plan, mini-med etc today, you still have to pay the individual mandate's "shared responsibility penalty" tax, specifically because they aren't considered actual health insurance. However, there's a huge difference: The ACA didn't actively create/encourage the creation of those types of plans, and in fact takes measures to restrict their use...whereas the BCRAP/Cruz amendment goes out of its way to do everything possible to create as many "Cruz plans" as possible, with the government's official blessing.

I don't know how many people are currently enrolled in these types of subprime policies, but if they do, they at least did so understanding the choice that they made: I know I have to pay a penalty because this policy doesn't get me off the hook, and I'm OK with that.

If the Cruz amendment were to become the law of the land, I guarantee that millions more people would snap up "Cruz plans" thinking that they "count" as real healthcare policies...and for many of them, not only would they later discover that they aren't, they'd also find out the hard way that they aren't even allowed to switch to a real one for at least 6 months...which can literally be the difference between life and death for someone with a cancer diagnosis.

In fact, it's possible--I'm still a little fuzzy on this--that they might have to wait as long as 16.5 months. Why? Because of the Open Enrollment Period, which Mike Pence is shortening to just 6 weeks starting this fall (to be fair, it was already scheduled to drop to 6 weeks starting in 2019; he just bumped that up by a year).

Open enrollment is scheduled to run from Nov. 1st - Dec. 15th. A 6 week open enrollment period means 10.5 months per year when most people are already locked out of enrolling under the ACA itself. I'm not entirely sure how the BCRAP's 6-month waiting period would actually work. For instance:

Now, does that mean you only have to wait 6 months and then qualify for a Special Enrollment Period (SEP) as of June 26th, 2020? That seems unlikely.

Or does it mean that you have to wait over 10 months until the next Open Enrollment Period the following November 1st, 2020 (which is what I suspect is the case)?

Or is the 6-month lockout an additional penalty on top of that? Might you have to wait until May 1st, 2021? Again, that seems unlikely but the wording is confusing.

Or, what about if you're diagnosed on October 20th? Does that 6-month lockout period overlap the entire Open Enrollment Period from November - December, meaning you're locked out for just over a year?

Ah, but there's a "solution" to this problem as well:

The law includes an exception that appears designed to avoid such a scenario, however ― exempting people from the six-month waiting period if they were enrolled in one of the bare-bones plans the day before trying to enroll in a new one, according to Jost.

For people trying to leave the less comprehensive plans, the exception would “probably” spare most of them the risk of going without coverage entirely for six months, Jost said.

But there would still be an “element of added risk” that people would get stuck with the six-month waiting period, he noted.

More importantly, the exception to the six-month waiting period does little to minimize the other risks inherent in buying those plans in the first place.

Amazing. Cruz actually anticipated the "Oh, shit, it turns out my plan sucks ass and I need to replace it with a real plan immediately!" situation...but of course, this only gives you 24 hours to a) absorb the emotional shock of being diagnosed with a serious, potentially crippling/debilitating/terminal disease, b) deal with telling your spouse, children, etc. about your diagnosis; and c) calmly and rationally choose your real healthcare policy. Of course this all assumes that you have the time to do all of this...God help you if you don't get stuck in traffic, get a flat tire, still have to work, etc etc. Nope, you have 24 hours to deal with all of that, or you're screwed.

To clarify: I realize that you don't have to drop your "Cruz policy" the moment you're diagnosed...but according to my friend Laura Packard:

cc: @lpackard: How long did it take to start you on treatment/meds from the day you were diagnosed?

It took a few weeks (about 3 1/2) before my first chemo. Needed a couple biopsies, minor surgery (installing the port for chemo) etc.

Thanks. And what would have happened if you’d had to wait, say, 6 months and 1 day to start treatment?

I don't think I'd still be alive.