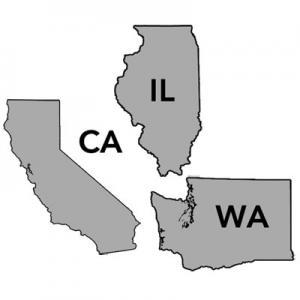 BREAKING: CA Assembly passes SB1108(@DrEdHernandez) with 50 votes, to prevent California from agreeing to Medicaid waivers that don't meet the goals of Medi-Cal, such as restricting eligibility thru barriers like work requirements. Now seeks final vote in Senate. #Care4AllCA

I don't think I even knew about this one, but am glad to see it pass and hope it becomes law. The odds are slim that California would ever try and add work requirements to Medicaid anyway, but it's still a good thing to be proactive about.

Association Health Plans (AHPs) are the "ass" part of #ShortAssPlans. They haven't gotten nearly as much attention as the "short" part (expansion of so-called "Short Term, Limited Duration" policies), a complete ban on which actually just made its way to Gov. Brown's desk a few days ago, but there are some healthcare advocacy wonks who think AHPs could actually pose an even bigger threat to the ACA market than expanded STLDs. Again, hoping this one gets signed into law as well.

BREAKING: To prevent extreme prescription drug cost-sharing, CA Assembly passes our bill #SB1021(@Scott_Wiener) on a bipartisan, 62-0 vote. Bill would extend CA patient protections on prescriptions, including those that cap co-pays at $250. #Care4AllCA

Wow! This one is interesting not because it passed, but because it was unanimous (well, sort of...CA's assembly has 80 seats, so I guess the other 18 either didn't vote at all or abstained? I guess even Republicans are really feeling the heat on consumer drug prices. It'll be interesting to see what effect this bill has on unsubsidized premiums if it goes into effect, of course...

#SB1152(@SenatorDrEd22 @DrEdHernandez) is now on call on the California Assembly floor. Sponsored by @CPEHN and @SEIUCAL, it seeks to prevent hospital "patient dumping," providing guidelines for when homeless patients are discharged from a hospital.

Ugh. This one is just depressing as hell. I mean of course I'm glad a bill has been introduced to deal with it, but it's just sad that such a bill is even needed.

In Washington State, they're dealing with the #ShortAssPlans problem from a completely different angle: Regulation by the state Insurance Commissioner. On the one hand, cracking down on them via legislation would be better since it'd be less subject to the whims of whoever happens to be running the insurance dept. at the time (that's how #ShortAssPlans became a threat in the first place--the ACA didn't restrict them; that was a regulatory decision by the Obama Administration, so it was easy for Trump to reverse it). On the other hand, legislation takes a lot longer to go through the process, so making this change via regulatory rule is probably the only way to ensure it goes into effect in time for January 2019:

OLYMPIA, Wash. – Insurance Commissioner Mike Kreidler has proposed a rule to restrict the sale of short-term limited duration medical plans to three months, prohibit renewal and require enhanced disclosure to consumers about the limitations of coverage.

Currently, any insurer that wants to sell a short-term limited duration health plan in Washington state must first receive approval from the Office of the Insurance Commissioner (OIC). The federal rule expanding the duration of these plans to up to one year, with renewals for up to three years, also permits state insurance regulators to set standards for their own health insurance markets.

“Some consumers may be caught in a coverage gap and need a short-term medical plan,” Kreidler said. “But I want to be sure they understand the limitations of the coverage they’re buying, set minimum requirements for that coverage and do what I can to make sure that these plans do not destabilize our individual health insurance market.”

Kreidler’s office determined that although some circumstances exist where these types of plans can fill a coverage gap for consumers, they should not be considered an alternative to comprehensive health insurance. In addition, improved disclosure is needed to make sure that people understand what is not covered by these plans.

Under the proposed rule:

For the most part, I believe these first three bullets simply lock in Obama Administration regulations. However, Kreidler is also going a bit further with some other sensible requirements:

In other words, they can no longer be total junk; they can only be...quasi-junk. Fair enough; this, combined with the 3-month limit, seems reasonable to me.

Ah, yes...rescission. There's a horror from the past which we haven't had to worry about for the past 9 years...(sigh)

OK, that's a whole mess of great (or at least promising, in the case of the CA bills...Gov. Brown will probably sign them all but you never can be sure...) news.

Now for the downside of the day:

Gov. Bruce Rauner vetoed a pair of bills over the weekend aimed at pushing back against efforts to dismantle the Affordable Care Act.

Rauner vetoed legislation Friday evening requiring the General Assembly to pass a supportive resolution before the state moves forward with any waiver reducing or restricting coverage under the Affordable Care Act or Medicaid.

He axed another Sunday limiting the duration of short-term health insurance plans to six months per year and requiring that the plans include notices alerting consumers that they’re not compliant with the ACA. President Trump’s administration issued rules earlier this month reinstating a 12-month enrollment limit on the plans, up from three months.

Rauner also vetoed legislation increasing the legal age in Illinois to buy cigarettes and tobacco to 21.

Really? Cigarettes are still a thing these days? Apparently so.

On the other hand, there were a few bright spots on the healthcare front in Illinois as well:

Meanwhile, Rauner signed several healthcare bills over the weekend, and earlier in the week.

Um...OK, although there really shouldn't be religious exceptions for vaccines unless you also agree to never come into physical contact with anyone else, especially in a healthcare/medical enviroment. I guess this is better than nothing, though.