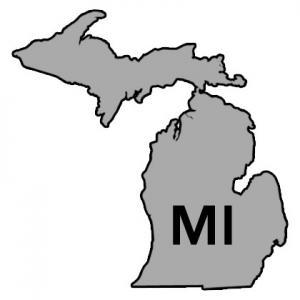 Later I noted that his primary opponent, former State Senator and County Prosecutor Gretchen Whitmer, has far thinner responses posted on her website when it comes to healthcare policy. I also noted that there are some good reasons for this which likely have nothing to do with being "a tool of the insurance lobby", a "neoliberal sellout" bla bla bla and so forth.

However, for the record, yes, Ms. Whitmer does indeed support universal healthcare coverage, as shown in the Q&A video clip above from one of her town hall appearances (thanks to Mary Bernadette Minnick Weatherly for the clip and the OK to repost it).

Below is a verbatim transcript of the whole exchange:

Q: "Gretchen, I have a question for you. It's a question that a group of ours has been arguing back and forth with. Some people like the idea of single payer healthcare...or universal healthcare. How do you feel? I know that your family comes from Blue Cross and Blue Shield and I understand that...just from reading in the newspaper, is that correct?"

Q: "Do you believe in single payer healthcare...or universal healthcare? And if not...I know that you've been wanting for health insurance [costs] to be lower for everyone in the state, and you've worked hard for that, and we commend you for that...if it comes to where we could possibly...when you're Governor...if we're pushing for a universal, or a single payer, system...would you possibly be on board for that?"

First off: The person asking the question is making the understandable mistake of conflating "single payer" with "universal coverage" healthcare. The two are not necessarily the same thing; one refers to how healthcare providers are paid (i.e., primarily by taxes for SP) the other refers to which people receive coverage (i.e., everyone in the state for UC).

Unfortunately, most of the public seems to be very confused about this distinction, as well as other phrases like "Medicare for All", which is intended by folks like Bernie Sanders, Abdul El-Sayed and others to refer to a 100% Comprehensive, 100% Universal, 100% taxpayer-funded, $0 out-of-pocket cost system...but which many in the public seem to think could also refer to "Medicare for all who want it" (i.e., it would be optional...otherwise known as a public option).

A: "My goal is to get every person in this state covered with healthcare. Making sure that we embrace the Affordable Care Act, or Obamacare, because we know it's the same darned thing, so people are comfortable using one phrase or the other...we know that thanks to President Obama, we've had the opportunithy to expand Medicaid in Michigan. It's called Healthy Michigan here in our state; I pushed and worked my tail off for that, to fight back on all the attacks from Washington that we've seen from the Trump Administration, because we've got to get everyone covered, absolutely. I am in favor of getting everyone in this state and in this country covered with real, comprehensive, quality healthcare...and whether it is through a Medicaid for all, or it is just through expanding state programs...that's exactly where I think we need to go, there's no question.

What she DIDN'T do is tie herself down to one specific funding mechanism (i.e., Single Payer), which makes total sense because, once again, there are any number of routes to get from here to there. In fact, technically speaking, even El-Sayed's MichCare proposal wouldn't be "single payer", it would be "dual payer", since the funding would be split between the federal and state government. That might be splitting the hair too finely, but it's still an important point because, as I've noted repeatedly, his proposal would require Donald Trump's CMS Administrator, Seema Verma, to authorize a waiver which would redirect all federal funding for Medicare, Medicaid, CHIP and ACA subsidies towards the new MichCare program.

As an aside, I should note that even if Verma were to authorize such a waiver (spoiler: she wouldn't), huge portions of MichCare's budget would still be subject to the whims of federal dollars. If Medicare, Medicaid, CHIP or ACA funding is messed with any further, that would directly impact MichCare (of course, it would impact that spending under those current programs as well).

More to the point: There are many progressive healthcare experts who think that "MEDICAID for all" makes a lot more sense structurally/etc. than "MEDICARE for all", and there are important differences between them. In fact, she actually mentions "Medicaid for all" as being one route instead of "Medicare for all". I don't know if that was a verbal flub or worded that way on purpose, which would be perfectly fine.

As I noted in my piece a week or so ago: Let's suppose she commits herself specifically to single payer itself (which, again, is simply a funding mechanism) during the campaign, but once elected, it turns out we end up with a system that's more like Germany, France, Japan or Switzerland...each of which have universal coverage costing half as much as the U.S. or less, but none of which are single payer systems. I'd be fine with that myself, but it would also make her into a liar, since it isn't "single payer" specifically.

So what did she have to say about single payer itself this week?

In an interview with Crain's, Whitmer said establishing a Medicare-for-all health insurance system in Michigan is "not realistic."

"I don't oppose that, but it's not a real option right now," Whitmer said of single-payer health care. "... The projections tell us it's not realistic in Michigan at this moment."

In other words, it might be doable in the near future, we're not quite there yet, but she intends to do everything she can to expand comprehensive, affordable coverage in the meantime. I see no problem with this.

If El-Sayed is being too tunnel-visioned about his healthcare plans, is Whitmer being too open-ended about hers? Yes. I actually would like to see something a bit more concrete than "if it covers everyone in Michigan the answer is yes" and so forth. I do understand her not letting herself get too locked into any one specific pathway for a sweeping, all-encompassing healthcare system overhaul since there are several ways we could go to achieve the same end result: Universal, quality, comprehensive, affordable healthcare coverage for every Michigan resident. Once we get to that point, guess what? Once we've established that everyone is covered, if it then made sense to transition towards SP as the funding mechanism, that could be an option as well. However...

HAVING SAID THAT...yes, I do admit to being somewhat disappointed with Whitmer's healthcare policy offerings so far. Don't get me wrong--she does have detailed proposals for roads/infrastructure, schools/education, jobs/skills training,clean water/environment and government transparency/openness...but El-Sayed is correct that her healthcare issues page is indeed a bit on the skimpy side. Maybe she's working on a more detailed healthcare plan and will have it posted in the next few days; if so, great.

If not, though, later this week I'll be posting a list of my own Michigan-specific heathcare policies which I'd very much like to see Whitmer (or El-Sayed, although he's obviously already married to his MichCare proposal)...as well as every Michigan State House and Senate candidate campaign on for the general election. None of what I'm proposing would be nearly as sweeping as El-Sayed's MichCare plan, of course, but most of them should be a lot more feasible in an environment in which the Democrats have control of both the Governor's office and State House but still come up slightly short in the state Senate (which, let's be honest, is the most likely scenario even in what I hope is a "Blue Wave" January 2019 environment).