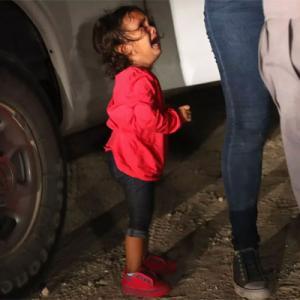 HHS just blocked us from entering its facility in Homestead, Florida to check on the welfare of the children being held here. They are obviously hiding something, and we are going to get to the bottom of this. pic.twitter.com/q4m6Zd0ck2

An HHS official tells @weijia that there will NOT be special efforts made to reunite children who have already been separated from their families bc of the Zero Tolerance Policy, despite Trumps EO. Process will proceed for minors currently in the unaccompanied children program.

NBC News: An HHS spokesperson says the agency has received no new orders on how to handle the roughly 2300 children in their care who are currently detained and separated from their parents. @JuliaEAinsley

In email obtained by @AliceOllstein, HHS told lawmakers they're forbidden from making unscheduled visits to child detention centers—or speaking to the children being kept there https://t.co/8oz3ayBuOY pic.twitter.com/TlLhfrrWZV

An e-mail from HHS, obtained by TPM, says lawmaker visits must be set up two weeks in advance, with no exceptions. When they are allowed to visit, members of Congress are not allowed to take any photos, record audio or speak with the detained children. They are not allowed to bring any staff members with them on the visit.

“To protect the privacy and vulnerability of children in its care, we cannot allow visitors to record or photograph anything within the facility property, nor are visitors allowed to interact with the children,” Sara Morse, the deputy assistant secretary for legislation at HHS, wrote to Capitol Hill offices. “We appreciate your cooperation.”

Once again, the reason stated by the HHS Dept. for this policy is "to protect the privacy and vulnerability of children". That was yesterday.

Immigrant children say they were beaten, kept in cells naked and tied to chairs at center

Immigrant children locked up at a Virginia center say they were beaten, left naked in cells and strapped to chairs by guards.

Around 30 unaccompanied minors are being held at the Shenandoah Valley Juvenile Center and have suffered from an abusive atmosphere, according to a federal court case filed on behalf of an unidentified undocumented 17-year-old boy from Mexico.

...What he allegedly found there were prison-like conditions with cells, no privacy from guards to use the bathroom, one hour of recreation time per day, racist taunts such as being called a “Mexican monkey,” physical hitting as well as harsh punishments.

“Several immigrant detainees have reported being stripped of their clothes, occasionally including their underwear,” the Virginia suit says, adding that the plaintiff was punished by being tied to a chair for hours and other children put in restraints for long periods of time.

One 15-year-old Honduran boy joining the suit said that he had been slammed against the ground and the wall after an argument over holding a door open, another 15-year-old said he was restrained to a chair with a bag over his head.

Migrant children, traumatized from being detained under the Trump administration’s zero tolerance immigration policy, are being forcibly injected with powerful psychotropic drugs that can lead to movement disorders, cause obesity, and have other long-lasting, harmful effects on children, according to new legal filings.

Children held at Shiloh Treatment Center, a government-funded facility in Manvel, Texas, described being placed on multiple psychotropic medications without their parents’ consent.

...The child’s mother was not consulted before the drugs were administered, even though she could have been reached.

Carlos Holguin, attorney for the Los Angeles-based Center for Human Rights & Constitutional Law, argues that the center would have required either parental permission or a court order before it could legally medicate the minor.

...“Either they’ve watched their parents get killed, or have been raped, and then when they’re in custody and placed in a shelter facility they become more despondent and desperate to rejoin their families as time goes on,” he said.