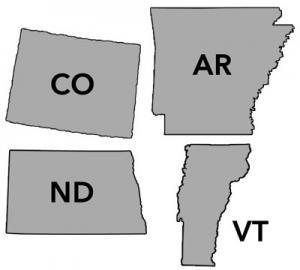 I had actually already written about Vermont doing this back in March, but seeing how it was one of only 2 states (+DC) which didn't allow Cost Sharing Reduction (CSR) costs to be loaded onto premiums at all this year, I figured I should mention it here as well. Once again:

In 2019, however, assuming CMS Administrator Seema Verma doesn't do the stupidest thing she possibly could (i.e., attempting to force every carrier to "Broad Load" their CSR costs), it looks like most, if not all states will be jumping on the "Silver Switcharoo" bandwagon. Besides Vermont, it now looks like the other "No Load" holdout, North Dakota, will do so as well next year. As Louise Norris reports:

Looking ahead to 2019: North Dakota insurers will add CSR cost to silver plans

About a third of the states took that option for 2018, and North Dakota is joining them for 2019. The state’s rate filing instructions direct insurers to add the cost of CSR to on-exchange silver plans, and to the identical silver plans that are sold off-exchange. But they’re also instructing insurers to file “corresponding” silver plans that will only be sold off-exchange, and that don’t have the cost of CSR added to premiums.

This is the "Switch" part of the Silver Switcharoo: People enrolled in Silver plans who are looking to avoid getting hit with the CSR load will be specifically encouraged to look for special off-exchange Silver plans which will likely be virtually identical in every way to their on-exchange equivalent except for the premium price. In many states, the carrier is even labelling them as such ("Silver Saver" vs. "Silver Saver Off-Exchange", etc.), though I'm not sure how North Dakota or Vermont carriers intend on handling that part of it.

In addition, both Norris and I have also recently reported that Colorado, which is one of the "Broad Load" states this year, is also upgrading to full #SilverSwitcharoo status in 2019. That means the 2019 scoreboard now looks more like this:

It's worth noting, however, that DC is kind of a special case anyway: In DC, anyone earning up to 200% of the Federal Poverty Line are eligible for Medicaid to begin with (much higher than the 138% FPL cut-off in most states), which lops off the vast bulk of those who would otherwise qualify for CSR assistance anyway. Furthermore, CSR help is much more generous from 100-200% FPL than it is from 200-250%, which means even the few people who do receive CSR assistance only get a small amount. This means that in DC, the CSR load is so nominal that it doesn't really impact premium rates by more than perhaps 1% or so either way.

UPDATE: Louise Norris is kicking butt--she just confirmed that, like Colorado, another state which Silver Loaded this year is "upgrading" to full #SilverSwitcharoo status in 2019: Arkansas:

Looking ahead to 2019: Cost of CSR being added to on-exchange silver plans

Rate filings for Arkansas insurers must be submitted by July 23, 2018. Insurers have been instructed to add the cost of cost-sharing reductions (CSR) to on-exchange (on-marketplace) silver plan rates:

“any premium amounts due to lack of federal Cost Sharing Reduction funding should be attributed to the silver level variants for Marketplace filings.”

I wouldn't be at all surprised to see at least 3 dozen states go full Silver Switch with the rest at least going Silver Load by the time the dust settles this fall.