BEHOLD! The first in a series of boring-ass ACA/healthcare videos! 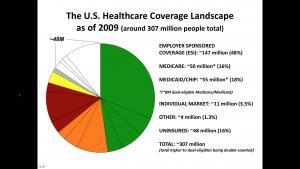 As regular readers know, I've spent the past few months speaking at various political/activist club meetings giving a lengthy presentation which gives a basic overview of the healthcare coverage situation in America, how the ACA was supposed to work, which parts of it are/aren't working, how I think the parts which aren't working should be fixed/improved, and of course what the Republican Party's plan of the day is to screw up everything which works while making the existing problems far, far worse.

By popular demand, I've embarked on a project to bring a version of this presentation to the web, by way of a series of short, simple videos (narrated slideshows, really) which give the basics. The first one can be viewed above.

As I note at the outset: I realize how incredibly basic and crude this is. I actually have some experience in video editing from my wannabe film producer days (long story, don't ask) in the 1990's, but I'm more than a little rusty at it...and frankly, given that the Senate vote is coming up in just a few days, I don't exactly have a lot of time for fancy effects and the like.

To kick things off, the first video just gives the breakout of The Pie Chart, circa 2009, just before the Affordable Care Act was passed and signed into law (it runs about 14 minutes long).

Anyway, please take a look and let me know what you think!

UPDATE: I've uploaded a higher-resolution version with some basic enhancements.