Cook Report: Healthcare will take Center Stage in November. I plan to be here through it all...but I'll need your help. 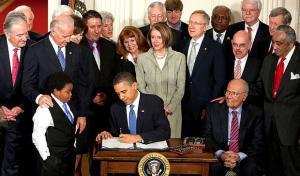 TODAY IS THE 8TH ANNIVERSARY OF THE AFFORDABLE CARE ACT.

Since then, despite a number of real problems with the law and an endless series of ferocious attacks by the GOP, the ACA is still standing. It’s beaten and bloodied, but it’s still the law of the land, and it’s resulted in the uninsured rate being slashed from 48 million Americans in 2013 to 29 million today. 16 million people have been added to Medicaid coverage via ACA expansion, and 9 million are receiving subsidized healthcare coverage via the ACA exchanges.

Thanks to the ACA, no one can be denied coverage based on their medical condition. Women can’t be charged more for their gender. Maternity and mental health services now have to be covered. People undergoing chemotherapy and premature infants requiring neonatal care no longer eat up their lifetime coverage maximum cap within a few months.

Again: There are real problems with the ACA which need to be fixed, but for the most part, it’s made life better for tens of millions of people, and needs to be strengthened and improved until the next major phase in achieving comprehensive, universal healthcare coverage for everyone, whether via “Medicare for All”, “Medicare Extra” or some other plan.

via the Cook Political Report:

Democrats seem to be betting that health care — costs and access — will be the more salient issue in 2018. In fact, as we saw in the special election in PA-18, Democrat Conor Lamb made the case that many of his constituents are going to have to use their tax cut refund to pay for escalating health care costs. It’s also true that Americans are more emotionally attached to health care than they are to almost any other issue. They may not love the health care system they have today, but they also dislike the idea of government messing with it.

In 2010, of course, voters punished Democrats for messing with the system. But, eight years later, Obamacare is more popular than ever. A February Kaiser Foundation poll found the long-maligned health care law garnering 54 percent approval, including 55 percent among independents.

...Moreover, with Democrats no longer in charge in Washington, the issue of health care is now the responsibility of the GOP. Trump has repeatedly pledged to "let Obamacare fail.” Almost every House Republican voted for a bill that would repeal Obamacare. And, Congress won’t help shore up insurers in the exchanges — referred to in DC as Obamacare stabilization — which could lead to insurers jacking up rates.

...It’s clear that Democrats see the issue as much more politically potent this year as well.

...Last week, I met half a dozen Democratic candidates running for GOP-held seats. Every one of them mentioned health care as one of the main reasons for their candidacy.

...For their part, Republicans are counting on Democrats to lack this level of discipline on the issue come the fall.

...While Trump and the GOP health bill may not be popular, they argue, neither is Bernie Sanders-style Medicare for all. For example, while some polls have shown growing support of a single-payer or government run health program, it's also clear that this support is thin and not particularly well-grounded. A Kaiser poll taken last summer found that "the public’s attitudes on single-payer are quite malleable, and some people could be convinced to change their position after hearing typical pro and con arguments that might come up in a national debate.

Last year Trump and the rest of the GOP did everything they could to attack, undermine, sabotage and repeal the ACA. They mostly failed…but scored a few hits, mainly in the form of repealing the Individual Mandate, slashing marketing/outreach funding, causing massive amounts of Fear/Uncertainty/Doubt and stripping away Cost Sharing Reductions (although this last attack was mostly cancelled out by a clever pricing workaround called Silver Loading).

This year it’s mostly about regulatory sabotage by the Trump Administration (his executive orders on Short Term and Association Plans, allowing Medicaid work requirements and so forth for starters). The GOP tried to squeeze in another major restriction on abortion rights, but that was nipped in the bud last night.

But they aren’t gonna stop lying about what they’re trying (and occasionally succeeding) in doing.

As some of you may know, I've been operating ACASignups.net for nearly 4 1/2 years. It started out as a nerdy hobby thing in my spare time, but quickly overtook my life. I always planned to shut it down after the first Open Enrollment Period ended back in April 2014...and then in March 2015...and again in 2016. Year after year, people clamored for me to keep it going one more year.

Until 11/8/16, I had honestly intended on winding things down here and refocus on my day job...and frankly, I've been increasingly neglecting that business more and more as my work here has taken up an increasing amount of time.

Well, we all know what happened next.

Since the 2016 election, interest in the site has become higher than ever.

My work is partially supported through a combination of banner ads and one-time donations, and I'm eternally grateful to those who've helped out...but if I'm going to continue analyzing healthcare data, debunking the fake/misleading claims by Donald Trump and the GOP and educating the public about how the ACA works, the real problems it has, how to fix them and where we should go from here, I need to have a more stable, consistent source of support.

That's where Patreon comes in.

Instead of making a one-time donation, with Patreon you pledge to make a small monthly contribution on an ongoing basis. You can pledge as little as $1/month if you'd like; every bit helps!

All content on ACASignups.net is still be available to all visitors, you’d just be supporting it over at Patreon.

For those who pledge support at $5/month or above, I offer a weekly newsletter subscription and plan on experimenting with things like an occasional podcast and/or livestream Q&A, that sort of thing.

If you'd prefer to stick with one-time support, the PayPal/GoFundMe options are also still available, of course, but I'm encouraging supporters to consider becoming a Patron today!