Sen. Tammy Baldwin introduces bill to head Trump's #ShortAssPlans off at the pass 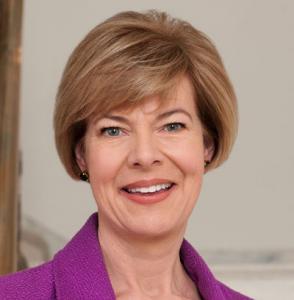 Interesting timing of this, coming right on top of the other ACA stabilization/improvement bill introduced by the House Democrats today:

“The Fair Care Act is an opportunity for lawmakers to keep their word on guaranteed protections for pre-existing conditions.”

“As someone who was branded as a child with the words, ‘pre-existing condition,’ I want to make sure that no parent, foster parent or grandparent has to choose between helping their child get better or going bankrupt,” said Senator Baldwin. “Republicans pushed repeal, but promised they would protect people with pre-existing conditions. The Fair Care Act is an opportunity for lawmakers to keep their word on guaranteed protections for pre-existing conditions.”

First reported in Vox, the Fair Care Act would prevent greater access to short-term, junk plans, safeguard current protections for those with pre-existing conditions and help prevent further premium increases and insurance market instability caused by the Trump Administration’s sabotage. The legislation would prohibit Trump’s proposed rule expanding access to short-term, limited duration plans from taking effect and would implement protections to ensure that short-term plans are only offered in limited circumstances as well as newly require these plans to comply with basic consumer protections.

According to the Vox article:

Even though short-term plans would still be permitted, they could no longer escape Obamacare’s core protections. They would be prohibited from denying people coverage based on their health status or charging sicker people higher premiums; they could not have annual or lifetime limits. They would also be limited to three months by law and they would be non-renewable, as the Obama administration had decreed by regulation.

Right now, I don't believe Short-Term Plans have to include any of those things. It sounds like Baldwin's bill, in addition to cutting them back down to a 90-day limit (which makes sense for a Short-term plan), would also require that they include three of those six features: Guaranteed Issue, Community Rating and No Annual/Lifetime Caps.

I presume that these plans would still be allowed to skimp on the 10 EHBs, 60% AV and Preventative Services, which means they would still be a cheaper option for some people...again, for 3 months per year only, during life transitions.

“While lawmakers from both sides of the aisle have been on record objecting to any elimination of protections for patients with pre-existing conditions, the administration’s proposal to extend short-term health insurance plans that are inadequate for someone diagnosed with a serious illness such as cancer would reintroduce discrimination based on health history,” said Chris Hansen, president of the American Cancer Society Cancer Action Network. “The proposed legislation from Senator Baldwin would work to ensure health insurance products that are only intended as a short-term bridge aren’t permitted to replace longer term coverage without meeting minimum standards. Without important guardrails, proliferation of substandard coverage could lead to tremendous market instability and reinstate barriers to affordable, meaningful coverage that includes cancer prevention, treatment and follow-up care.”

“The Administration’s proposed changes to short-term limited duration plans will hurt Americans who have a pre-existing condition, including those with lung disease and lung cancer,” said Harold P. Wimmer, National President and CEO of the American Lung Association. “We thank Senator Baldwin for her leadership in introducing the Fair Care Act and for fighting to protect patients who have pre-existing conditions.”

“The Trump administration’s cynical proposal twisting the definition of “short-term plans” seriously jeopardizes the ability of older Americans and people who have been sick to find affordable, quality health insurance. It also opens-up the door for insurance company tricks that just a few years ago left consumers with astronomical out of pocket costs and caused thousands of families to declare bankruptcy when they got sick,” said Frederick Isasi, Executive Director, Families USA. “We applaud Senator Baldwin for her leadership in introducing legislation to protect families from the Trump administration’s back-door regulatory attacks. Families deserve peace of mind that their insurance coverage will be there for them when they need it most, including offering real coverage and financial protections. We look forward to working with Senator Baldwin to advance this critical legislation for families across our nation.”

The Urban Institute recently found that both expanding access to short-term plans, as well as the actions that President Trump and Congressional Republicans have taken to date to sabotage the health care system would increase premiums and result in more uninsured Americans. In Wisconsin, premiums would go up by an average of 20 percent in 2019, and 130,000 more Wisconsinites would lack comprehensive health coverage in 2019 because they would either become uninsured or would be enrolled in junk plans that don’t provide key health benefits.

For the last year, Senator Baldwin has repeatedly called on the Trump Administration to stop the sabotage of our nation’s health care system. She has been sounding the alarm about these destructive efforts, in particular President Trump’s decision to end cost-sharing reduction payments that make health care more affordable for 110,000 people in Wisconsin.

Senator Baldwin has also worked on bipartisan solutions to strengthen and stabilize the health insurance market and improve access to health care. Senator Baldwin is a cosponsor of the bipartisan Murray-Alexander health care stabilization legislation, and led the effort in the Senate to restore investments in enrollment outreach and in-person assistance, which the Trump Administration gutted last year. In-person assistance is especially critical to ensuring younger adults sign up for health care, which will further help stabilize the market and lower costs.