This one is personal. 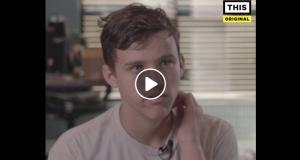 Please watch the full video above before reading this entry.

I've been debating about whether to post this for several days now.

My son is on the Autism spectrum. His case is fairly low-level/high-functioning (mostly in the Aspergers Syndrome category, I believe), and most of the time it's not all that noticeable, but it's definitely an issue in certain circumstances...and the video above gives a perfect example.

I've made one or two vague references to a member of my immediate family being in need of mental health services and physical therapy (he also has a mild case of cerebral palsy), but haven't gone into specifics before. This is partly because it wasn't really necessary to the point I was making, but mainly because my wife and I are very protective of our son and don't want him to grow up thinking of himself as an "Aspie" or whatever the label is; he's just himself. However, he's old enough now that I decided to ask him if he's OK with my mentioning it publicly, so here we are.

Again, my son's case is fairly mild most of the time...but it includes habits like fidgeting and a need for tactile sensation...meaning he’s constantly touching & picking up small objects. Think of that in a SWAT situation.

I’m as terrified as any other parent at the thought of my son being caught in a school shooter situation...but I’m ALSO terrified at the thought of how a police officer might react to his tendency to fiddle with small objects, especially when he’s nervous. For that matter, there are times when he'll go into what my wife and I refer to as "ramble mode"...where he's literally unable to stop talking for several minutes at a time, no matter what the circumstances. You know...like if he was hiding in a closet and his life, and the life of others around him, depended on everyone remaining perfectly quiet and not moving.

Hell, it doesn't even have to be a school shooting situation. I'm constantly losing sleep thinking about how he might handle himself if, say, I'm ever pulled over for speeding or whatever while he's in the car...or, a few years down the line, if he's pulled over. Given the itchy trigger fingers that way too many police seem to have these days (or perhaps always did), this is an understandable concern.

Anyway, please watch the video above and consider talking to your school district and/or local law enforcement to find out whether they have programs/training in place for the officers to know how to deal with children (or adults, for that matter) who have autism, Aspergers or other developmental disabilities or non-standard physical/emotional behaviors. Thanks.