URGENT! Switching hats for a moment from the ACA to the ADA: Call your Senator NOW! 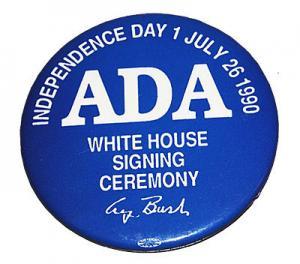 As everyone's heard by now, there was ANOTHER horrific school massacre by a white supremacist Trump supporter*, this time at Stoneman Douglas High School in Parkland, Florida. Seventeen students and teachers were murdered, and another fourteen were wounded and hospitalized.

In a sickly ironic bit of timing, just an hour or so ago the United States House of Representatives voted to pass HR 620, officially titled the "ADA Education and Reform Act", with 225 members of Congress voting Yea and 192 voting Nay.

While the vote was mostly along party lines, I was saddened to see that a dozen Democrats joined 213 Republicans to vote for it...putting it over the top.

What would H.R. 620 actually do? I don't know a whole lot about disability advocacy, I admit, but according to the American Civil Liberties Union:

The so-called “ADA Education and Reform Act”weakens the Americans with Disabilities Act and undermines one of the key goals of the law.

...Title III of the ADA prohibits places of public accommodation (i.e., businesses or service establishments that are open to the public like grocery stores, doctors’ offices, recreation facilities, private schools, homeless shelters) from discriminating against people with disabilities. If a person with adisability encounters anarchitectural barrier that prevents her from accessing the business, she has 3 options under the ADA: speak with the business, file a complaint with the Department of Justice, or file a lawsuit as provided under the law.

The “ADA Education and Reform Act” upends a key provision of the ADA by preventing people with disabilities from immediately going to court to enforce their rightsand to press for timely removal of the barrier that impedes access. Without this critical enforcement mechanism, compliance under the ADA will suffer and people with disabilities will be denied the access to which they are entitled to under the law.

This ill-informed legislation requires people with disabilities to jump through numerous procedural hoops before they can commence a lawsuit to protect their rights. It also removes anyreason for businesses to proactively comply with the ADA.Instead ofensuring that people with disabilities have access,as the law requires, businesses will likely wait until a customer confronts an obstruction and has completed the detailed notification process. Even then, the only action the business is required to make is “substantial progress”inremoving the barrier described in thenotice. A business could wait years without actually removing barriers and face no penalty, as long as it can show “substantial progress” was made. There would be no incentive for a business to learn about ADA compliance and take steps prior to notification. “Wait and see” would become the norm.

There are no money damages under Title III of the ADA.

Under Title III of the ADA, an individual who files a lawsuit and is successful is entitled to removal of the barrier and attorney’s fees. There are no damage awards. Once a business removes the barrier in question, legal claims challenging that barrier under Title III no longer exist. Some state laws, however, do authorize money damages for non-compliance. Amending the federal ADA, as this bill does, will have no effect on lawsuits seeking damages under thosestatelaws.

Complying with the ADA is no more burden some than complying with other laws and ample resources exist to aid compliance.

Businesses must comply with many complex and detailed laws, including tax laws and health and safety laws. Civil rights laws and other laws protecting people with disabilities should not betreated differently.

The so-called “ADA Education and ReformAct” will do nothing to stop frivolous lawsuits. And there are ways to address the problem of unscrupulous attorneys without placingunwarranted burdens on the rightsof people with disabilities.

Although a very small number of lawyers have filed significant numbers of lawsuits that may be frivolous or fraudulent, a “notice and cure” period would not eliminate fraud or frivolous suits. At best, it defers the lawsuit. The true purpose of this bill is to allow businesses to delay meeting their obligations under the law–for weeks, months, or longer –at the expense of people with disabilities.

Additionally, there are established and tested avenues to address this problem. Courts and state bar examiners have the tools needed to shut down unscrupulous lawyers through sanctions, disciplinary measures, and other steps. These mechanisms have been, and continue to be, successfully used to address fraudulent and unethical practices under Title III.

I have no idea what sort of condition the 14 people wounded in yesterday's shooting are in. Hopefully every one of them will fully recover...but there's also a good chance that one or more of them will end up paralyzed or otherwise disabled for years or possibly for life. If so, and if this bill becomes law, it will make the rest of their lives more difficult...along with the lives of tens of millions of other disabled Americans. It's a shitty bill.

The good news is that as I understand it, H.R. 620 also requires 60 votes in the Senate.

The bad news is that those dozen D votes in the "Yea" column for the House vote makes me nervous than I would normally be about the prospect of 9 or more Democratic Senators voting for this bill as well.

I've been informed that the Senate vote could also be as soon as TODAY, so it's time to fire up the phone lines and CALL YOUR SENATORS *NOW* AT 202-224-3121 TO ASK THEM TO VOTE *NO* ON THIS BILL!