Revenge of the Red Leg? Nine states working on their own Individual Mandate 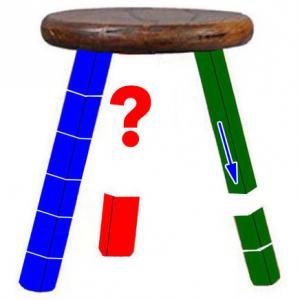 Last year, in my "If I Ran the Zoo" piece, I stuck my neck out and noted that the single biggest problem with the Individual Mandate isn't that it exists, but that it's not strong enough (conservative healthcare writer Michael Bertaut, who I disagree with on most issues but respect on this topic, also argues that the mandate has never been enforced strongly enough either). Here's what I said at the time:

The reality is that as much as everyone complains about the $695 or 2.5% income individual mandate penalty for NOT having qualifying healthcare coverage, the penalty should really be increased. There, I said it. The problem is that if the penalty is significantly less than the amount that the premiums would be, some people will still decide to eat the tax instead of signing up.

Admittedly given what a firestorm was created over the individual mandate the first time around, I'm pretty sure increasing it would be a near-impossible task. Still, I'm including it here since it wouldhave a significant positive impact on enrollment (and thus stabilizing the risk pool).

There are two main reasons I was so opposed to the mandate being officially repealed last month. The first is, of course, that it will lead to several million people losing coverage (somewhere between the S&P's 3-5 million and the CBO's 13 million, I'd guess) and some amount of unsubsidized premium spikes (whether the CBO's 10% or not).

The second reason is that as difficult as it would be to increase the penalty before it was repealed outright, I knew that it would become 10x more difficult to bring back after being repealed. The Dems lost 70-odd seats in the House of Representatives in large part due to the GOP fanning people's hatred of the individual mandate the first time around; I have to imagine it's become political Kryptonite to consider bringing it back again, much less raising it.

And yet, it looks like legislators in some pretty blue states, at least, are attempting to give it a shot anyway. Via Stephanie Armour of the Wall Street Journal a few days ago:

At least nine states are considering their own versions of a requirement that residents must have health insurance, a move that could accelerate a divide between Democratic states trying to shore up the Affordable Care Act and Republican states intent on tearing it down.

...Maryland lawmakers are pursuing a plan to replace the ACA mandate, which requires most people to pay a penalty if they don’t have coverage. States including California, Connecticut, Hawaii, Rhode Island, Washington, Minnesota, New Jersey and Vermont, as well as the District of Columbia, are publicly considering similar ideas.

...The push carries some risk for Democrats, polls suggest, since the mandate is the least popular part of the ACA. About 45% of Democrats in September thought the national mandate should be kept and 20% supported repeal, according to a poll from the Urban Institute, an economic and social policy research group.

In addition, setting up a system to track individuals’ coverage, and possibly exact penalties through income taxes or other measures, would be a significant undertaking for states, health policy experts said.

I'd imagine this would be especially tricky in states which don't already have an income tax...which includes Washington.

Speaking of which, the Washington State senate has already made good on the first phase of their plans:

While DC threatens the progress made on health care, leaders in our state are fighting to preserve the promises made in the ACA. #waleg pic.twitter.com/uNvmTqKAKw

...although it's really just a bill to set up a task force to explore the possibility of a mandate at the state level:

Similarly, older and sicker people may prefer states with a mandate and other insurance regulations, so it is possible blue states could attract more of them. But that depends on a host of factors, including whether a state expanded Medicaid, the percentage of residents who get health-related tax credits amd a state’s potential moves to relax the ACA benefit requirements.

Of course, all 9 of the states (including DC) have expanded Medicaid already and all of them are pretty unlikely to "relax" the ACA's benefit requirements, so these aren't likely to be major factors. Also keep in mind that Massachusetts' original individual mandate penalty is still in place--the law was trumped (no pun intended) by the ACA, of course, but it was never taken off the books, so I presume they'll be dusting it off and re-implementing it starting in 2019 regardless.

I have no idea what the political fallout will be for the other states, but I admit it would be a fascinating real-world experiment to see what happens if a dozen blue states implement mandate penalties while none of the red states do so.

My only advice is that if they do take the political risk of imposing a mandate penalty, at least make sure it's more stringent than the one which was just repealed--I'd probably recommend making it something like the same cost as the least-expensive Bronze plan available on the exchange after whatever tax credits they'd otherwise have applied.