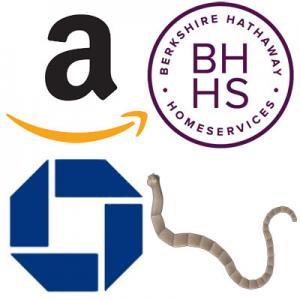 Three corporate giants are teaming up to combat what billionaire Warren Buffett calls a “hungry tapeworm” feasting on the U.S. economy: health care.

Amazon.com Inc., Buffett’s Berkshire Hathaway Inc. and JPMorgan Chase & Co. said they plan to collaborate on a way to offer health-care services to their U.S. employees more transparently and at a lower cost. The three companies plan to set up a new independent company “that is free from profit-making incentives and constraints,” according to a short statement on Tuesday.

Ummmm...ok, so it only applies to their own employees. That means it presumably has nothing to do with the individual market (which is the area most desperately in need of fixes/improvement) or the small group market. It's also limited to employees (and presumably their families) of these three companies only, at least for now. So we're talking about around 1.2 million employees; if you include their families, that's around 2.9 million people total.

Don't get me wrong, it's interesting to be sure. Doing it themselves instead of via a third party administrator will presumably save some money, and making it non-profit will save some more (although they'd also be the ones making the payments, so that could simply be a matter of less money shuffling from their own left pocket to their right pocket). Increased efficiency of the delivery system will certainly shave a few bucks off the costs.

I'm just not sure I understand all the "Game Changer!" hype being thrown around Twitter this am. It sounds very much to me like this amounts to three big corporations becoming self-insured via one merged pool instead of three separate ones. That's fine, and I'm sure it'll cause ripples across the industry, but unless/until they open up the same risk pool to individual market enrollees as well, it's hard for me to get too excited here.

As Adrianna McIntrye put it:

In addition, there's also this:

So are we heading towards tying our health insurance even more tightly to one’s job? The ACA or single payer was/is an attempt to break those ties.

Amazon (NASDAQ: AMZN), Berkshire Hathaway (NYSE: BRK.A, BRK.B) and JPMorgan Chase & Co. (NYSE: JPM) announced today that they are partnering on ways to address healthcare for their U.S. employees, with the aim of improving employee satisfaction and reducing costs. The three companies, which bring their scale and complementary expertise to this long-term effort, will pursue this objective through an independent company that is free from profit-making incentives and constraints. The initial focus of the new company will be on technology solutions that will provide U.S. employees and their families with simplified, high-quality and transparent healthcare at a reasonable cost.

Tackling the enormous challenges of healthcare and harnessing its full benefits are among the greatest issues facing society today. By bringing together three of the world's leading organizations into this new and innovative construct, the group hopes to draw on its combined capabilities and resources to take a fresh approach to these critical matters.

"The ballooning costs of healthcare act as a hungry tapeworm on the American economy. Our group does not come to this problem with answers. But we also do not accept it as inevitable. Rather, we share the belief that putting our collective resources behind the country's best talent can, in time, check the rise in health costs while concurrently enhancing patient satisfaction and outcomes," said Berkshire Hathaway Chairman and CEO, Warren Buffett.

"The healthcare system is complex, and we enter into this challenge open-eyed about the degree of difficulty," said Jeff Bezos, Amazon founder and CEO. "Hard as it might be, reducing healthcare's burden on the economy while improving outcomes for employees and their families would be worth the effort. Success is going to require talented experts, a beginner's mind, and a long-term orientation."

"Our people want transparency, knowledge and control when it comes to managing their healthcare," said Jamie Dimon, Chairman and CEO of JPMorgan Chase. "The three of our companies have extraordinary resources, and our goal is to create solutions that benefit our U.S. employees, their families and, potentially, all Americans," he added.

The effort announced today is in its early planning stages, with the initial formation of the company jointly spearheaded by Todd Combs, an investment officer of Berkshire Hathaway; Marvelle Sullivan Berchtold, a Managing Director of JPMorgan Chase; and Beth Galetti, a Senior Vice President at Amazon. The longer-term management team, headquarters location and key operational details will be communicated in due course.

I'm not dismissing this new venture outright; it could prove to be a Big Deal after all down the line. On the other hand, it could disappear into the mist. My guess is that it'll end up being sort of like the Segway: Massively overhyped out of the gate, with the actual end product proving to be mildly interesting and useful but hardly worth all the fuss & bother made about it early on.