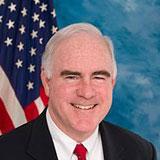 OK, it's been a lonnnnnnng week (and it's only Tuesday!), so it's time for something a little different...

U.S. Rep Pat Meehan said Tuesday he had developed a deep “affection” for a younger aide and told her that he saw her as “a soul mate” as they talked over ice cream one night last year, but in an interview with the Inquirer he said he never pursued a romantic relationship with the woman, who later accused him of sexual harassment.

Meehan, a Delaware County Republican, also acknowledged that he initially reacted “selfishly” when he found out the aide, decades younger than him, had entered into a serious relationship with another man, and shared a heartfelt, hand-written letter he wrote to her in May wishing her well, but also thanking God “for putting you into my life and for all that we have seen and experienced and genuinely shared together.”

He also said he intends to continue running for reelection in Pennsylvania’s Seventh District.

The comments were his first extensive response to a New York Times report Saturdaythat revealed that he had used thousands of taxpayer dollars to quietly settle a sexual harassment claim brought by the former aide, who was decades younger than the married, 62-year-old Congressman.

Uh-huh. OK. Sure. Another old white married dude accused of sexually harassing one of his staffers, then using taxpayer funds to pay her off. Got it. Creepy and upsetting, but pretty much par for the course in the #MeToo era, right? Go on...

...He said he felt bad about lashing out in his office when told of the woman’s relationship, attributing it to the tension-filled stretch around the House GOP votes to repeal the Affordable Care Act, when he faced intense pressure from both sides of the debate.

THERE you have it, folks! Not only is Obamacare a "job killer" (actually, over 16 million jobs have been added since the ACA was signed into law), but apparently it also causes balding, married 62-year old white men to turn into creepy stalkers. Is there no sin Barack Obama isn't guilty of?