So much for that: McConnell plays Lucy to Sen. Collins' Charlie Brown 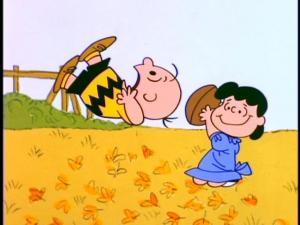 BREAKING: The 3 big promises @SenatorCollins got will NOT be done before the final vote on the tax bill. The bill to keep the govt open does NOT include Alexander-Murray, reinsurance, or waiver of Medicare cuts. #mepolitics https://t.co/VWzkz7vAbq

Not much else to say. Collins is a reasonably intelligent woman; I find it difficult to believe that she didn't know damned well that this would happen.

UPDATE: OK, I might not have much to say but lord knows The Daily Beast and The Hill do:

House conservatives are already indicating that they're prepared to block some of the key legislative promises that Senate Republicans demanded in exchange for their votes on tax reform legislation.

Those promises materialized in the frantic final hours of the tax debate last week, as Senate Majority Leader Mitch McConnell (R-KY) gave Sens. Susan Collins (R-ME) and Jeff Flake (R-AZ) assurances that some of their personal legislative priorities would be dealt with in exchange for their votes.

Collins said she received a promise that the Senate would consider two bipartisan pieces of legislation that would ostensibly mitigate the negative effects that could come from the tax bill’s repeal of Obamacare’s individual mandate. Flake said he received a “firm commitment from Senate Leadership and the administration” to work on a permanent protections for the soon-to-be-ended Obama-era program that shields children of undocumented immigrants.

Speaker Paul Ryan's (R-Wis.) office told a meeting of congressional leadership offices on Monday that the Speaker is not part of a deal to get ObamaCare fixes passed before the end of the year, according to a source familiar with the meeting.

Senate Majority Leader Mitch McConnell (R-Ky.) made a commitment to Sen. Susan Collins (R-Maine) that he would support passage of two bipartisan ObamaCare bills before the end of the year, a promise that helped win her vote for tax reform.

However, Ryan's office told a meeting of staff from the four top congressional leadership offices on Monday that the Speaker has not made that same commitment, raising further questions about whether the ObamaCare bills, already opposed by House conservatives, can pass the House.

...Conservative House Freedom Caucus leaders said last week that they opposed adding those ObamaCare bills to a funding measure, saying they are simply propping up the health law.

In addition, Rep. Tom Cole (R-Okla.), a leadership ally, said on Monday that he did not think Alexander-Murray could pass the House.