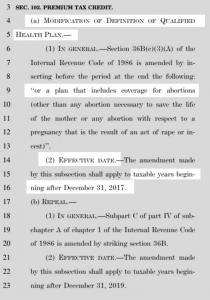 HOWEVER, there’s another aspect to this (both the prior and current version) which I hadn’t given much thought to, which I was reminded of by Twitter follower Josef jewel: It’s not just the individual market in which abortion policies would be banned...it’s also the small business exchange (aka the SHOP exchange).

The SHOP exchange never gets much attention because, frankly, it’s always been kind of a dud. It’s not that it doesn’t work at all, it’s just that the requirements for small businesses to enroll are kind of cumbersome and the tax credits are pretty skimpy, so not many small businesses bother signing up. The HHS Dept. has rarely even bothered reporting how many lives are covered under SHOP, although some individual states have; my best estimates have ranged anywhere from around 80,000 — 200,000 people nationally. Generally speaking, as horrible as the abortion ban (and the immediate start date) is, the SHOP side of it would likely be a pretty minor additional factor...except for three important things:

FIRST: About 50,000 of those people are enrolled via the District of Columbia exchange. Why? You can thank Chuck Grassley for that: He tried to bluff the Democrats into requiring all members of Congress and their staffs to enroll via the ACA exchange in order to receive their Federal Employee Healthcare Benefits. The end result of this is that right now around 24,000 Congressional staffers are enrolled using the DC SHOP exchange.

SECOND: How many of them are in policies which cover abortion? I don’t know about this year, but according to this 2013 article, an awful lot probably are:

The disclosure Wednesday by abortion opponent Rep. Chris Smith, R-N.J., also highlights an emerging issue nationally: It may be hard for individual consumers to determine whether abortion is a covered benefit in plans offered through the new online insurance markets.

For government insiders, there's another twist: Lawmakers and their staffs now appear to be the only federal employees with access to abortion coverage through their government-supported health insurance plans.

Smith said only nine of the 112 insurance plans offered to members of Congress and their staffs through the Washington, D.C., insurance market exclude abortion as a covered benefit.

AGAIN, it's important to note that it doesn't matter whether or not the enrollees actually get an abortion, become pregnant or even whether they're pro-choice or not. If the policy itself covers abortion, it would no longer be legally defined as a Qualified Health Plan under the ACA, which means it couldn't legally be sold on the ACA exchange, which means it wouldn't qualify for any tax credits.

THIRD: In addition, in DC specifically, neither individual market nor small business market policies can be sold off-the ACA exchange either, which means that you wouldn't be able to enroll in a policy covering abortion even if you were willing to pay full price for the policy.

Hell, for all I know, some members of Lindsey Graham and Bill Cassidy’s own staff may have their policies terminated on January 1st. It’s even conceivable (no pun intended) that the Senators themselves have policies which currently cover abortion without them even realizing it, which would take sick irony to new depths.

UPDATE: OK, the individual market (Section 102) text is quite clear about changing the definition of a Qualified Health Plan to not allow abortion coverage, but re-reading the small business text (Section 103) is a bit fuzzier...it may still allow these policies to be sold on the exchange, but simply wouldn't allow any tax credits to be issued to those enrolled in them, which isn't quite the same thing. If so, that would mean the policies themselves wouldn't be made illegal...it's just that there'd be no reason whatsoever for any small business to bother signing up for them, since the tax credits are kind of the whole point of the program.

Of course, if I understand correctly, small businesses in DC would still have to use the SHOP exchange unless the city council changed the rules...and I'm also not sure how this might impact Congressional staffers FEHB benefits, since they may or may not count as "Small Employer Health Insurance Expense Credits" under the ACA and/or the Graham-Cassidy bill.

In short, the entire Graham-Cassidy bill...both the earlier version and this one...are a confusing, muddled mess.