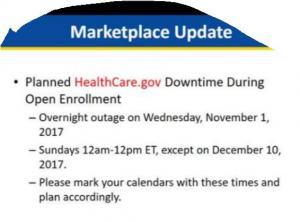 ...Again, I don't think they would take it quite that far; my guess is that they'll keep the site running mostly as it's supposed to, not doing anything too blatantly obvious...just enough to deliberately increase the general distrust and unease people have over Trump and, more to the point, of "government run healthcare" in general.

The reason I'm saying this is because of yesterday's revelation by Kaiser Health News reporter Phil Galewitz:

Sunday Hours: Obamacare Website To Be Shut Down For Portion of Most Weekends

The Trump administration plans to shut down the federal health insurance exchange for 12 hours during all but one Sunday in the upcoming open enrollment season.

The Department of Health and Human Services will also shut down the federal exchange — healthcare.gov — overnight on the first day of open enrollment, Nov. 1. More than three dozen states use that exchange for their marketplaces.

...And now HHS is closing the site for a substantial portion of each weekend — for maintenance, officials said. That is the same time that many working patients — the prime target group for ACA insurance — could be shopping for their insurance, critics noted.

...“I could see this really impacting the ability of people to complete an application sign-up in a single sitting, which is so important,” said Jason Stevenson, spokesman for the Utah Health Policy Project, an Obamacare navigator group. He noted that 10 p.m. Mountain Time is often a relatively popular time for people to enroll online.

It's worth remembering that the 2018 Open Enrollment Period is already less than half the length of the prior several years (45 days instead of 92). Twelve hours on six days = 3 full days...or nearly 7% of the total enrollment period. That's the equivalent of being offline for six days in prior years.

Needless to say, the obvious initial reaction to this news is to cry "SABOTAGE!", and that's exactly what pretty much everyone on Twitter did, including myself.

When asked about it, a CMS spokesperson gave a response which wasn't particularly reassuring:

A spokesman for the federal Centers for Medicare & Medicaid Services, which oversees the exchanges, said the shutdowns should not cause too many problems.

“Maintenance outages are regularly scheduled on healthcare.gov every year during open enrollment. This year is no different,” said the official, speaking on background and requesting anonymity. “The maintenance schedule was provided in advance this year in order to accommodate requests from certified application assisters. System downtime is planned for the lowest-traffic time periods on healthcare.gov, including Sunday evenings and overnight.”

This development raises valid questions which reporters should be asking of HHS/CMS/HC.gov officials, of course, including (but not limited to):

Former Obama administration officials say the planned shutdowns of healthcare.gov goes far beyond what’s happened before. Typically, the online enrollment system was offline for only a few hours at a time and it was much less frequent than once a week.

A federal report to Congress said healthcare.gov was online 99.9 percent of the time in the 2015 and 2016 open enrollment seasons.

...“There is just a really big question as to why this is happening,” said Lori Lodes, former CMS communications director. “Have they done a comprehensive review of the tech and believe this is what is actually necessary? If so, then why don’t they have confidence in the system.”

“We’ve never only had six weeks to do this with no outreach help from the Feds,” she said. “Every minute is valuable.”

On top of that, you have this from Frank Baitman, the former Chief Information Officer for the HHS Dept. until a couple of years ago:

There are no insurmountable tech challenges that require HealthCare.Gov to be offline. Only a lack of will & respect for Am people. https://t.co/gRX8DSEwQx

In fact, when I first started writing this entry, I was ready to go hog wild on the attack...but I'm holding back for three reasons:

I can't go into any more detail than that, and I can't vouch say for certain that this is accurate...I just know that the three points above have put just enough doubt in my mind to keep me from going completely ballistic over this.

In short, there's four possibilities which I can think of:

Thanks to Donald Trump and Tom Price repeatedly and openly stating their desire to "blow things up" and that the ACA is "a complete failure" etc, the general public is very likely to believe that it's some combination of #1 and #2.

HHS appears to be claiming some combination of #3 and #4.

The good news is that regardless of what the truth is, there's a simple and obvious solution to the problem:

Yes, simply bump out the end of the 2018 Open Enrollment Period from December 15th to December 18th and voila, problem solved.

In fact, I'd recommend bumping it out a bit longer...5 days, let's say. That would go a long way towards resolving the issue....and, frankly, it'd be the right thing to do regardless. There'd still be plenty of other sabotage/undermining issues to go after the Trump Administration over (killing outreach/advertising, lack of CSR funding, playing will-they-or-won't-they with enforcing the individual mandate), but they'd at least put out this particular fire.

If HHS Secretary Tom Price and CMS Administrator Seema Verma really do have any intention of trying to make Open Enrollment go smoothly/successfully, simply tacking on a few extra days at the end would be one very good and logistically easy way of proving it. There's plenty of time to get the word out (um...well, there would be if they hadn't also slashed the HC.gov advertising budget by 90%...) now, and extending enrollment deadlines is something which has been done by nearly every ACA exchange every year for the past four years, including HC.gov, so there's ample precedent for doing so...especially due to technical problems.

I'll leave it at that for now.