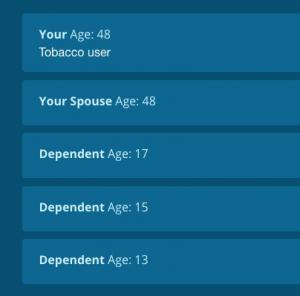 Now, some people have speculated that Cassidy may very well be conflating $40,000 in annual premiums with $40,000 in total medical expenses (the bulk of which presumably go towards his "special needs" child). If that's the case, then it sounds quite possible. However, plenty of people on Twitter have been skeptical about it being $40,000 in premiums alone, so let's take a look.

Obviously I don't know most of the details for this particular family's situation, but let's walk through Cassidy's "$40,000/year premium" story based on what he does tell us:

(as an aside, apparently, to Bill Cassidy, anyone who earns less than 400% FPL--around $48,000/year for a single adult--is a shiftless lazy-ass, but whatever.)

First, let's go to HealthCare.Gov and see what's available for him on the ACA exchange. I don't know where in Louisiana he lives, so for the moment I'll have to just go with, say, Orleans Parish for the moment (I'll re-run the numbers if someone can find out which rating area is the most expensive in the state...or, better yet, if someone can actually get Sen. Cassidy to say what area of the state the guy lives in).

I also don't know how old the man is, whether he smokes or not, how old his child is, or whether he's married and/or has any other children. For the moment, let's assume it's just him and his kid; let's say he's 40 years old and his special needs child is 10 years old.

In that scenario, here's the most expensive policy I was able to find:

OK, let's assume he's married, his wife is also 40 and they have a second 8-year old child.

What if we make all four family members five years older and make one of them a smoker?

Whoops! It looks like you only get charged for your first three kids; any more than that and they're just sort of thrown in at no extra charge. Impossible to hit $40,000 this way. Let's go back to three kids and see what nudging the ages up by two more years does:

(Again, as an aside, I should also note that assuming the man in question does indeed have a wife and 3 children, and his total household income is around $116,000, Senator Cassidy is now saying that anyone who earns less than $116,000 is a shiftless lazy-ass, as opposed to being a "striver" who "works hard").

How common is this scenario? Not very, I'd imagine, but I agree with Sen. Cassidy that it is a real problem, because in this situation, the family is spending a good 35% of their total income on their insurance policies, plus up to another $5,400/year on their deductible. Of course, the husband could stop smoking, and they don't have to have the Gold PPO plan...they could downgrade to either a Silver or an HMO (or both) and save tons of money. Then again, they do have a special needs child (specifics unknown), so I suppose there's justification in going for the full Gold PPO.

In fact, I'll go Sen. Cassidy one step further: Some family premiums could be even higher! Last night I was able to take a really extreme hypothetical case and came up with a whopping $85,000 premium. Of course, in order to do this I had to go with the following specs:

That's a pretty farfetched scenario, of course, but the $40,000 Louisiana scenario is--while rare--not that crazy.

The question isn't whether this type of situation happens, but what we're gonna do about it.

And the answer to that shouldn't be "rip apart the ACA and Medicaid and throw everyone to the wolves".

The answer should be--at least in the short term--to beef up and raise the eligibility cap for ACA tax credits to include those earning more than 400% FPL.

Here's the current formula, and my own proposal (which, I should note, isn't even as generous as those posited by the Urban Institute and/or Hillary Clinton's campaign last year, although those would be even better):

Look at that! Assuming the Louisiana example's household income is around $116,000/year, they'd only be on the hook for perhaps 7% of it for a Silver plan, or around $8,200/year. I think the Benchmark Silver in Orleans Parish this year is the Humana Silver 3550/Louisiana HMOx, which runs $1,559/month at full price ($18,708/year), so they'd receive roughly $882/month in tax credits that they aren't eligible for today.

But what if they still want the Gold PPO? Well, they could apply that $10,500/year in tax credits towards it, knocking a full quarter off the total. They'd still be paying around $30,300/year (26% of their total income), but remember, this is for a pretty damned good policy.

Oh, and one more thing: Remember how Sen. Cassidy complained that his mystery family's premiums are supposedly set to increase by "20%" next year? Well, guess what?

As far as I can tell, the main reason his rates are increasing by that much is because of the Trump Administration's CSR reimbursement sabotage. As Louise Norris noted last week:

If CSR funding is allocated, rate overcharge will be reimbursed starting in 2019, via MLR rebates

...The Department of Insurance noted that if the proposed rates are implemented and CSR funding is provided throughout 2018 by the federal government, the situation would be worked out via the medical loss ratio rebates. If CSR funding continues, the rates for 2018 would be too high in Louisiana, and would result in the insurers spending less than 80 percent of premiums on medical costs. To fix the problem, the amount that was overcharged is rebated to enrollees, although rebate checks based on 2018 coverage wouldn’t start to be sent to plan members until the fall of 2019 (rebates sent in the fall of 2019 would be based on insurers’ average medical loss ratios from 2016-2018).

...although the difference would eventually be sorted out if CSR funding continues, consumers would be on the hook for the higher premiums throughout 2018, and wouldn’t see a rebate until well into 2019.

In other words, Sen. Cassidy, if you want to prevent your friends' premiums from going up by 20%, you might consider supporting the bipartisan market stabilization efforts being worked on by your colleagues, Sen. Alexander and Sen. Murray.

First: I have no idea what type of "special needs" the child in question has, but depending on what it is, they might qualify for Medicaid due to having certain disabilities even if the family earns too much to qualify based on income. Just something to keep in mind.

Second: Several people reminded me that if the man in question is self-employed, ACA-compliant individual market policy premiums are tax deductible:

The deduction – which you’ll find on Form 1040, Line 29 – allows self-employed people to reduce their adjusted gross income by the amount they pay in health insurance premiums during a given year. You’ll find the deduction on your personal income tax form, and you can file for it if you were self-employed and showed a profit for the year.

If you’re also eligible for a premium tax credit (premium subsidy), there are two methods that the IRS will let you use to determine your deduction and your tax credit.

You can’t take the premium deduction if you were eligible for a group insurance from your or your spouse’s employer.

Third and most importantly, however, it's worth noting that depending on what the child's situation/condition is, it's entirely possible that prior to the Affordable Care Act, this child might not have been insurable at ANY price due to having a disqualifying pre-existing condition.

In fact, whatever this condition is might very well be enough to deny them coverage once again in the event Graham-Cassidy were to become law.