The Washington Post has a preview of Bernie's NEW "Medicare" for All plan... 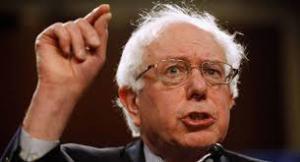 The official announcement is scheduled for Wednesday, presumably with much hoopla accompanying it (and a dozen or so Democratic Senators co-sponsoring it, many of whom are considered likely 2020 POTUS candidate prospects). Over at the Washington Post, Dave Weigel has a sneak peak. I'll wait until I've had a chance to read through the actual text of the bill itself to write up a full response/analysis, so I'll just post a few key excerpts from Weigel's piece for now:

Sanders’s bill, the Medicare for All Act of 2017, has no chance of passage in a Republican-run Congress. But after months of behind-the-scenes meetings and a public pressure campaign, the bill is already backed by most of the senators seen as likely 2020 Democratic candidates — if not by most senators facing tough reelection battles in 2018.

The bill would revolutionize America’s health-care system, replacing it with a public system that would be paid for by higher taxes. Everything from emergency surgery to prescription drugs, from mental health to eye care, would be covered, with no co-payments. Americans under 18 would immediately obtain “universal Medicare cards,” while Americans not currently eligible for Medicare would be phased into the program over four years. Employer-provided health care would be replaced, with the employers paying higher taxes but no longer on the hook for insurance.

Private insurers would remain, with fewer customers, to pay for elective treatments such as plastic surgery — a system similar to Australia, which President Trump has praised for having a “much better” insurance regime than the United States.

But the market-based changes of the Affordable Care Act would be replaced as Medicare becomes the country’s universal insurer. Doctors would be reimbursed by the government; providers would sign a yearly participation agreement with Medicare to remain with the system.

...The size of the tax increase, he said, would be determined in a separate bill.

“Rather than give a detailed proposal about how we’re going to raise $3 trillion a year, we’d rather give the American people options,” Sanders said. “The truth is, embarrassingly, that on this enormously important issue, there has not been the kind of research and study that we need. You’ve got think tanks, in many cases funded by the drug companies and the insurance companies, telling us how terribly expensive it’s going to be. We have economists looking at it who are coming up with different numbers. ”

OK, again, I'm gonna keep my comments to a minimum for tonight, but I'll say this: Between his open acknowledgement that it has "no chance of passage" under a GOP-controlled Congress and the lack of any details on the funding levels or tax formula, this strikes me as a completely symbolic bill, meant purely as a showpiece/rallying cry for the Democratic Party about the direction that they should be pushing (hard) regarding healthcare going forward. The general message here is, "The ACA got us started down the field, now it's time to focus on running the ball all the way into the end zone".

I'm completely OK with that myself, believe it or not. If that's what it takes to rally the troops, raise moral, get everyone on board for a unified Democratic Party, move the Overton Window and so on, I'm fine with that...and that's exactly what Nancy Pelosi feels is going on:

...“I don’t think it’s a litmus test,” said House Minority Leader Nancy Pelosi (D-Calif.) of Medicare for All. “I think to support the idea that it captures is that we want to have as many people as possible, everybody, covered, and I think that’s something that we all embrace.”

However, there's one little potential problem with that strategy:

Many supporters of Sanders have contradicted Pelosi, portraying his plan as popular — 57 percent of Americans support Medicare for All, according to Kaiser Health News — and efficient. Our Revolution, founded by Sanders, has urged Democrats to sign on; Justice Democrats, created after the election to challenge Democrats in primaries if they bucked progressive values, has asked supporters to call their senators until they endorse the bill. And a web ad paid for by Sanders’s 2018 Senate campaign, asking readers to “co-sponsor” his bill, attracted more than half a million names.

I've said it before, I'll say it again: For all of his "outsider" rhetoric, Bernie Sanders has been a U.S. Senator or U.S. Congressman for 27 years. He understands how these political games are played. He understands that you "can't start negotiations on the 50-yard line" and that you have to ask for more than you're willing to settle for in order to get as much of what you want as possible, etc etc. In a situation like that, sure, you try to get co-sponsors, etc...but for the love of God, don't make not signing on into an ultimatum. There are plenty of great sitting Democratic members of the House, Senate, state legislatures and so on who support universal coverage of some sort but don't necessarily think that this particular plan is the best way to go about getting there.

The problem with this strategy, in other words, is that it only works if your supporters understand what you're doing and are on board with it.

As far as I can tell, many Bernie supporters do get this...but an awful lot of them simply don't.

I'll leave it at that for tonight.