Former Obamacare outreach director has a few things to say.

Lori Lodes used to be Communications Director for the Centers for Medicare & Medicaid until last year under President Obama. As such, a big part of her job was administering ACA outreach efforts.

This evening, upon learning of the Trump administration's announcement that they're slashing advertising budget by 90% and outreach/navigation assistance funding by 39%, she was...not pleased. She took to Twitter to get a few things off her chest.

Instead of embedding a bunch of full Tweets, I'm pasting in the actual text of her thread to give the full picture:

Time to put on my "I used to run outreach for Obamacare" hat and talk about the Admin's decision to gut outreach and education.

***note*** This thread is long and barely touches on just how bad the impact of the Admin's decision will be.

First, it's the job of the government - in regs and everything - to educate people about signing up for health care.

And it's those people who need the most help who will end up paying the price. People with disabilities, immigrant communities, etc.

Look at the Kaiser survey to get a glimpse of how important navigator funding is to helping people enroll.

If people can't get the help they need to enroll...they'll go without care. Here's why people seek in-person help: 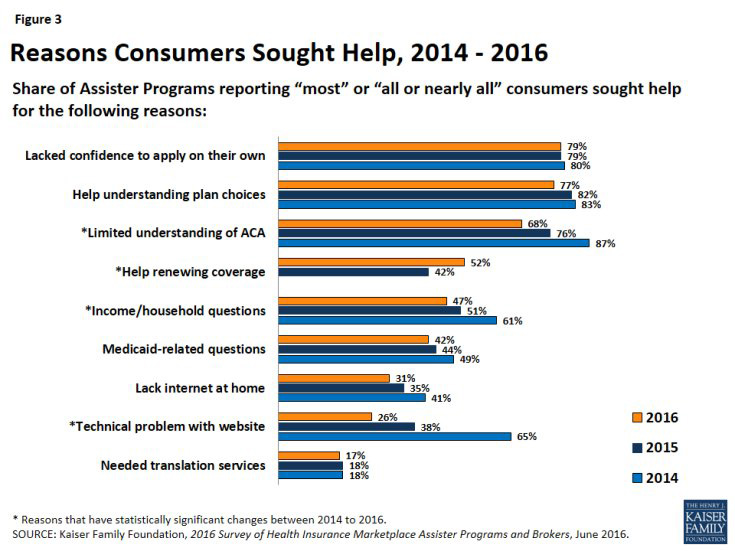 The new formula for funding navigators punishes those folks who set a reach goal for themselves. Ripping the rug out from under them...

Staff have been hired, budgets set and Open Enrollment starts in 2 months. Navigators are just finding out their budgets may be gutted.

Take a look at the type of organizations who are navigators and the communities they serve.

QUESTION: CMS is still funding a navigator in each state but is there still a minimum grant level for each state? Previously, it was $600k.

QUESTION: Is CMS going to increase Case Work staff because many with complex cases will no longer be able to get help from navigators?

Now, let's talk about outreach and paid media...and the boneheaded decision to cut it to $10 million.

They are spending ZERO dollars on TV ads. Despite having PROOF that it is the biggest driver of enrollment.

We tested every outreach vehicle against each other so that we would make sure that we were spending money effectively and get best ROI.

Guess what that modeling showed us? TV was #1 driver. And it helps make digital, email and everything else more effective.

So when they try to spin people about "diminishing returns" or "people already know about the program" know that they are lying.

CMS really had the audacity (on background nonetheless) to say that "most Americans are aware of the program at this point in time."

*head explodes* That is not how this works. Most people don't know Open Enrollment dates OR that the deadline for the first time is 12/15.

*still exploding* Most people don't know that if they shop on HealthCare.gov  they'll qualify for a plan that's less than $100.

*still exploding* The jokers even admitted that they have no "specific plans" for outreach to Latinos. What?!

QUESTION: Did they conduct an analysis to find out the impact cutting all television will have on enrollment? (hint: it will be big)

QUESTION: How are they going to staff the call centers? Last two years, it was around 12k.

Thanks for hanging in there with me. I'm pissed but more than anything heartbroken. People's health care should not be a political football.