Meet Laura. Then call your Senator. 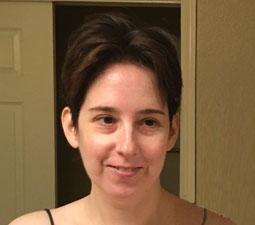 Laura Packard is a friend of mine. We first met about 10 years ago at a state convention in Detroit. She's an all-around awesome person, and one of the most accomplished people I know. Here's just a sampling:

I'm a partner at PowerThru Consulting, a growing national progressive digital consulting shop. At PowerThru we help nonprofits and Democratic campaigns use technology to spread their message and organize and activate their supporters online, to create change offline. We have staff in several states, and work with non-profits of all kinds and on progressive state and federal issues, campaigns and elections of all kinds. We've won four Reed awards and three Pollies for our work to date (including Best Congressional Website in both, Best State/Local Organization Website, Best County/Local/Judicial Website).

I have a deep interest in voting rights, elections and election-related issues, having served as an election inspector, precinct chairperson, on the absentee count board, and an electronic poll book specialist for the City of Ann Arbor in the decades since the gubernatorial election of 1998. I've also worked with voter registration groups, Secretary of State candidates and elected officials in several states, and on voter registration and access issues nationally and in specific states. My longtime work around voting rights advocacy led me to start up a new group in 2015, Voter Rights Action. Join us to get occasional email updates about voting rights news and actions you can take around the country.

I love my work at the intersection of technology and politics, and I also love to teach and help others use technology to effectively accomplish their organizational mission. I often share best practices at national and regional conferences such as AAPC, Art of Political Campaigning, CampaignTech, Campaigns & Marketing Summit, NTC, Netroots Nation, Organizing New York/Organizing 2.0 and RootsCamp, webinars for Progressive Majority, Salsa Labs and others, and trainings in-person for small groups around the country including for Wellstone's Advanced Campaign Management School, Amalgamated Transit Union, Camp Wellstone, Center for Progressive Leadership, Clean Air Task Force, Democracy for America, HRC, New Leaders Council and New Organizing Institute. I've worked with and trained at non-profits and campaigns in several states over the years, covering online strategy development, organizing and outreach, fundraising, messaging, advertising and social media. I'm more than happy to talk your ear off about email deliverability too, if you'll let me.

Laura's resumé goes on and on; as a website developer and political activist myself, I've been humbled by her scope of accomplishment and skills.

Oh, and one more thing about Laura:

The very last page of the CBO's AHCA score includes some examples of how insurance premiums compare under current law (the ACA), under the Trumpcare bill (the AHCA) without a market regulation waiver or under the Trumpcare bill with a regulation waiver. They give examples at two different income levels and three different ages (21, 40 and 64). I don't know what Laura's income is, but she's 41 and single with no kids (she OK'd me posting that), so the single-40-year old example is perfect:

That sounds bad at the lower income, but on the surface sounds pretty good if she's at the higher income level, right?

First: On a moral/ethical level: She knows that the AHCA would also kick 14 million people off Medicaid over the next decade, along with millions of others via the individual and employer-based market. Neither Laura nor I are fans of benefitting financially at the expense of millions of others.

Second: On a more personal, practical level: While she'd be receiving several thousand dollars in credits at that higher level that she doesn't currently receive under the ACA, that would only benefit her if she isn't charged tens of thousands of dollars more to keep having her stage 4 Hodgkin's Lymphoma covered:

The ACA prohibits insurers from charging higher premiums based on factors like health status, gender, or pre-existing conditions and instead requires community rating. The law also prohibits insurers from denying coverage altogether to applicants with pre-existing conditions—which is called guaranteed issue. The most recent amendment would let states eliminate community rating while maintaining the ACA’s requirement of guaranteed issue. This would mean that while carriers would be forced to offer everyone coverage, they could impose surcharges on premiums based on health status and medical history.

We estimated what surcharges would be for various medical conditions in the absence of community rating. We drew upon data that the Centers for Medicare and Medicaid Services, or CMS, uses to calculate transfers between insurers based on enrollees’ expected costs—this is called the risk adjustment program. We compared the plan liability for total costs for a healthy 40-year-old to the plan liability if that individual had certain medical conditions, as shown in Table 1 below.

Based on our analysis, we estimate that individuals with even relatively mild pre-existing conditions would pay thousands of dollars above standard rates to obtain coverage. For example, because an individual with asthma costs an issuer 106 percent more than a healthy 40-year-old, she would face a premium surcharge of $4,340. The surcharge for diabetes would be $5,600 per year. Coverage could become prohibitively expensive for those in dire need of care: Insurers would charge about $17,320 more in premiums for pregnancy, $26,580 more for rheumatoid arthritis and other autoimmune disorders, and $142,650 more for patients with metastatic cancer.

After accounting for a 1.5 percent reduction in overall premiums from the risk sharing program, the surcharges would still remain astronomically high: $4,270 for asthma, $17,060 for pregnancy, $26,180 for rheumatoid arthritis, and $140,510 for metastatic cancer.

Ah, but wait, you say: What if she lives in a non-waiver state? Well, yes, that'd be a good thing...but if everyone agrees that living in an AHCA waiver state with cancer stinks and that we should all wipe our brow in relief if our state doesn't get a waiver, why allow those waivers in the first place?

However, even then it's not so simple:

[The waiver option] was meant to bridge the positions of hard-line conservatives, who wanted to scrap virtually all of Obamacare's major market rules, and members from blue states who worried about the backlash they'd get for killing off safeguards that voters broadly like. Mississippi and Arizona could apply for waivers to opt out. Illinois and New York could leave well enough alone.

Or, to put it another way, Republicans have promised that if you like your consumer protections, you can keep them.

But while technically true, this is pretty much an empty promise. As Kaiser Health News points out in a useful piece this week, there are plenty of reasons to think that if the American Health Care Act (or something similar) ever becomes law, legislators in liberal redoubts like New York and California will eventually have to weaken or abandon the consumer protections at the heart of Obamacare in order to keep insurance premiums from becoming unaffordable, especially for lower-income families.

Again, take a look at the CBO's example chart...and this time look at the 64-year old sample cases:

Blue states would suddenly find themselves with tens of thousands of devastated 50-64 year olds screaming bloody murder over post-subsidy premiums which make the hikes under the ACA seem like wistful memories. This in turn would place them under tremendous pressure to go ahead and strip out essential health benefits and/or community rating provisions for those who, like Laura, have expensive ailments like Hodgkin's.

Of course, even with those waivers, in this example, rates would still only drop by about 15%, leaving older folks still stuck paying over half of their annual incomes on their policies, so perhaps those states wouldn't take the waiver...paying 51% of your income isn't really much different from paying 61%, after all. Instead, they'd drop out of the market altogether...which is exactly what the GOP bill counts on in order to start "lowering" the rate of premium increases a few years later, as the risk pool "improves".

In the meantime, Laura would live with a constant knife to her throat, never knowing from year to year whether her state's governor or legislature would decide to put in for a waiver that year or not. Yes, there are a hundred other variables which have to be dealt with year to year under the ACA already (will this carrier be in or out? will they keep offering this plan or not?), but the ACA at least locks in some certainties: The plans which are offered have to include certain benefits and services, no matter what.

The ACA has serious problems which need to be addressed...but the AHCA is simply not the solution. It includes exactly two good elements:

If the final version of the GOP bill kept those two things while scrapping everything else in the AHCA bill, I'd be fine with it.

Unfortunately, everything else about it stinks, because those two items are added at the expense of a trillion dollars in funding for Medicaid and other lower-income financial assistance...and that's all aside from the consumer protection waivers.

CALL YOUR SENATOR. TELL THEM TO VOTE NO ON TRUMPCARE:

(Laura lives in Nevada and would especially appreciate NV residents calling DEAN HELLER at 202-244-6244 and demanding that he vote NO.)