Some readers may wonder why I, a lifelong Michigan resident who authors a website devoted to healthcare issues, haven't posted anything about my home state's latest shame, the Flint Water Poisoning scandal.

The answer is pretty simple: What the hell else is there for me to add? Our governor, Rick Snyder, along with a bunch of people at the top levels of his administration, who he appointed, appear to be guilty of, at best, criminal negligence (and at worst, potential negligent manslaughter) of the 100,000 citizens of Flint, Michigan...all in order to "save money". In fact, they were so intent on "saving money" that they didn't even bother to spend the $100 per day that it apparently would have cost to prevent hundreds or potentially thousands of children from suffering permanent physiological and mental damage.

Over the past few months, a bunch of internal emails between Snyder administration officials have been made public, each more appalling than the last. However, there's one in particular which made my blood boil more this morning; this one, from Karen Tommasulo, the Public Information Officer for the Michigan Department of Environmental Quality, from last July (h/t to Hector Solon for bringing it to my attention, though apparently the Detroit Free Press already posted about it back in October): 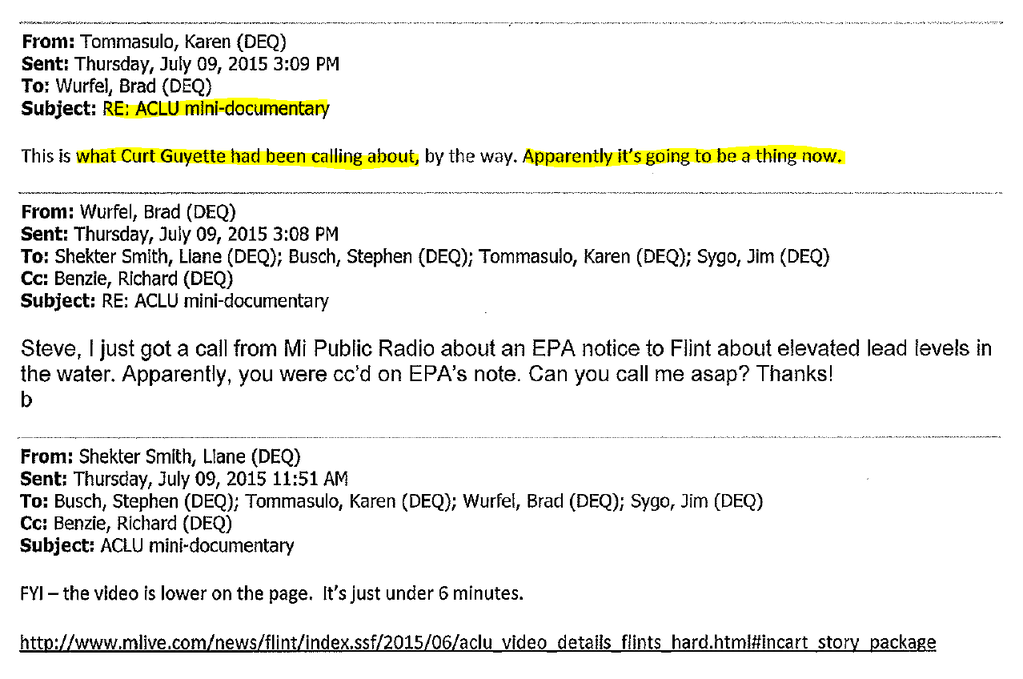 "Apparently it's going to be a thing now."

The image which immediately came to mind is this scene from "GoodFellas" in which Joe Pesci's character, Tommy DeVito, shoots the bartender, Spider, in the foot...and then immediately warns him not to make a big deal out of it:

(as Spider is being carried off to the hospital):

“Alright, so he got shot in the foot, what is it, a big fuckin’ deal? Take him to Ben Casey, the little prick! Let him crawl there like he crawls for the fuckin’ drinks!

"Hey, don’t get me upset now! Don’t make a big fuckin’ thing out of it, Spider, ya little prick! It was an accident, fuck him!”

For the record: In a follow-up scene set a few days later, Tommy continues to mock Spider's injury, then murders him when Spider dares to speak back to Tommy. An apt metaphor for the Snyder administration and the city of Flint.

For actual reporting on this ongoing atrocity, read Eclectablog's latest.