UPDATE: Like a man-made virus in a horror movie, House v. Price may no longer be able to be contained. 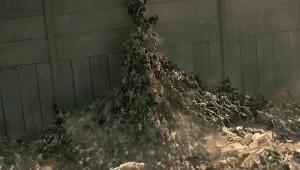 So The Plague is wreaking havoc on the world's population. Maybe Super Flu has killed millions, or some unknown biological agent is causing people to snap and kill each other. Heck, maybe we even have a good old fashioned Zombie Apocalypse on our hands. Either way, it's safe to say that for most of humanity, these are not fun times. How could things get much worse, you ask?

By the revelation that the disease in question has been manufactured by genetic engineering, and possibly is distributed by humans. The untold amount of death and destruction has been directly caused by the foolish or malicious action of Man himself.

It may have been designed for use as a biological weapon, or an unexpected result of an experiment gone wrong. Perhaps we just shouldn't have let monkeys watch TV for too long. However it came to be, it has now been unleashed on humanity at large, and has almost certainly gone far beyond what its designers had originally intended.

The House Republicans' lawsuit against the Obama administration over Cost Sharing Reduction (CSR) reimbursement payments was originally titled "House v. Burwell" since Sylvia Burwell was the HHS Secretary at the time. Now that Tom Price is in charge of HHS, the lawsuit title had to be legally changed to "House v. Price". The irony, of course, is that Tom Price himself was a member of the House Republican caucus at the time it was filed, which means that he's now literally a defendent in a lawsuit brought on behalf of himself.

This is entirely in keeping with the other absurdity of this case: Not only have the House Republicans done a complete 180º on their own lawsuit in recent months, first winning a court injunction prohibiting the payments from being made...and then requesting (and receiving) a stay of that same injunction...but according to University of Michigan Law Professor Nicholas Bagley, that may be temporary....and once the clock runs out on the stay, the Republicans may not be able to keep the CSR payments flowing without (gasp!) passing actual legislation to do so!

The most straightforward fix would be for Congress to appropriate the damn money. That’s probably a nonstarter, given how many Freedom Caucus members would cry foul at funding Obamacare. Nor is it clear whether the Republican leadership is willing or able to broker a deal with Democrats.

...So to get out from under the district court’s injunction, the parties may have to go back to the district court. But the court can modify its prior order only if there’s been a “significant change either in factual conditions or in law.”

Does Trump’s election qualify as such a “significant change … in factual conditions”? Perhaps. Certainly it would be strange to keep an injunction in place when no one on either side of the legal fight wanted it anymore. Judges don’t usually ask too many questions when opposing parties agree about something.

...The only reason to vacate the injunction, then, is because it’d be awfully convenient to keep making the cost-sharing payments — even though the judiciary, the executive, and the legislature all think those payments are unconstitutional. The judge might well balk. Indeed, she might be offended at the effort to enlist the federal courts in an unconstitutional scheme.

Now, it is true that the Democrats did mess up with sloppy wording in the ACA in the first place which gave the GOP the opening to sue over this issue. However, the GOP has now compounded that error 100-fold by filing a lawsuit which (so far) they've won...but which would have devastating consequences if that victory were to continue to completion. They could resolve the problem in ten minutes by, you know, doing their jobs and passing a simple amendment to the ACA in order to resolve the very mess they deliberately created...but apparently that's "a nonstarter", because of course it is.

As a result, they may have no way of controlling the chaos which would ensue if CSR payments were to stop. The virus may no longer be containable.

Bagley notes that the House GOP may have "no option" (other than, again, doing their jobs) other than to ask the court to continue to keep their lawsuit on ice...which would still leave Trump the option of cutting off payments on a whim.

UPDATE: So, what are the odds that the GOP will actually solve this particular issue (which is kind of on the urgent side given the ticking clock and upcoming filing deadline for 2018)?

According to Amy Lotven and Susannah Luthi of Inside Health Policy, not very good:

Several House GOP lawmakers on Tuesday (March 28) said there's a need to fund the ACA's cost-sharing reduction payments -- funding viewed by insurers as key to stabilizing the exchange market and that could stop flowing if the Trump administration doesn't continue its predecessor's defense of the payments in a lawsuit brought by House Republicans. But Sen. Roy Blunt, chair of Senate Appropriations HHS subcommittee said he “doesn't think” Congress will approve the funding his year. The White House, meanwhile, says it hasn't decided how to deal with the House GOP's pending lawsuit challenging the Obama administration for distributing the funding without a congressional appropriation.

Will insurers really stick around if the exchanges are that vulnerable?

House Speaker Paul Ryan (R-Wis.) said Thursday that not funding the Affordable Care Act’s cost-sharing reductions could destabilize the Obamacare exchanges, even as a House lawsuit against the administration continues.

Ryan said he expects the Trump administration to decide the issue while litigation is ongoing, noting it could take “months” to sort out if the case returns the court.

“While the lawsuit is being litigated, then the administration funds these benefits,” Ryan said at a press conference. “That’s how they’ve been doing it, and I don’t see any change in that.”

A spokesman for the Department of Health and Human Services did not immediately respond to a request for comment on the administration’s position on CSRs.