UPDATE: After thinking about it all day, I've decided to remove the "scrotum" nickname from the headline. I reserve the right to keep it in the body of this and future posts, however.

After being lambasted by pundits, reporters and politicians across the political spectrum for pushing an ACA replacement bill which would effectively raise insurance premiums on older enrollees up to eight times higher than they would be otherwise (eating up over 50% of their annual income in some cases)... 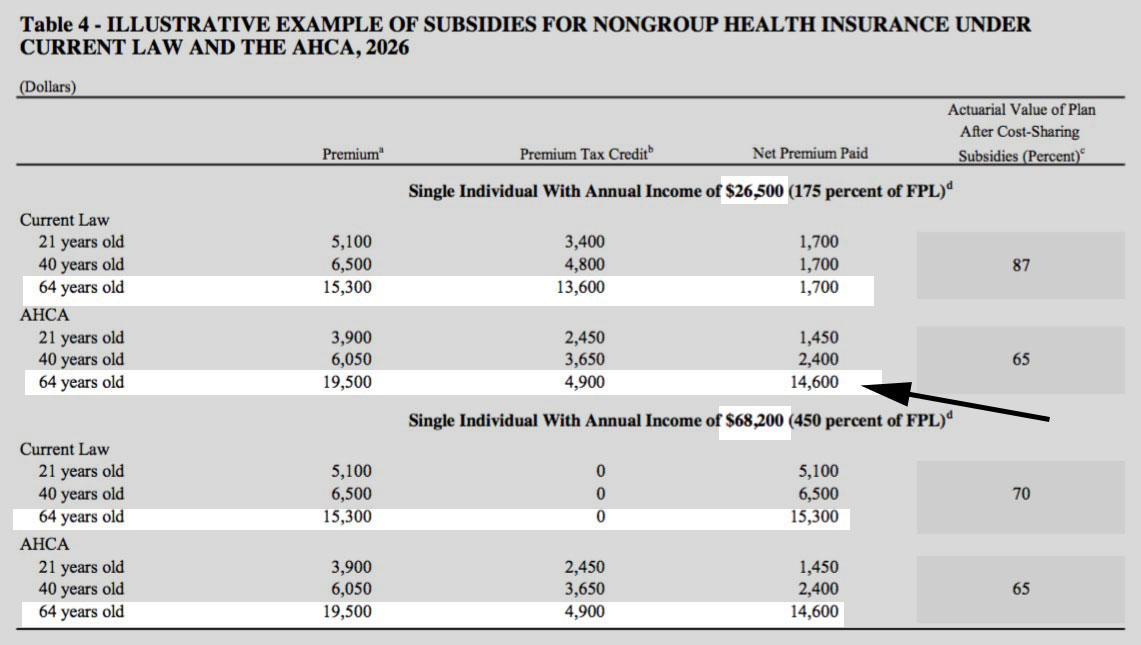 ...it looks like Paul "Scrotum" Ryan has decided to resolve this issue by...beefing up the tax credits for the higher age bracket:

“We believe we should have even more assistance — and that’s one of the things we’re looking at — for that person in their 50s and 60s because they experience higher health care costs," the Wisconsin Republican told Chris Wallace on "Fox News Sunday."

According to the official CMS 2017 Open Enrollment Period report, about 3.4 million current exchange enrollees are 55 or older. If you completely ignore anyone else, this population alone would amount to an additional $23 BILLION per year. Of course, assuming the AHCA allows credits to be given to off-exchange enrollees as well (I'm still not sure about this), that'd probably mean another couple million older people receiving higher credits, which would likely increase the total perhaps $14 billion more on top of that. Over a 10-year period, that'd add up to perhaps $250 - $400 billion.

In other words, Ryan's latest scheme--assuming it's along the lines of what I described above--would completely wipe out the $336 billion in savings which the CBO is currently projecting the AHCA to save...which is the only positive bullet point they can brag about at the moment.

The irony here is that I'm actually perfectly fine with beefing up the tax credits...based on income, although obviously that overlaps with age as well, since the ACA's credit structure already effectively takes age into account as well, as shown in the table above.

As stupid and inefficient as the above change is, it would at least help solve one of the many glaring problems with the Trumpcare bill. Unfortunately, Ryan is also talking about making two additional changes to the already-awful bill...both of which are even more cruel and mean-spirited than it already was, which is saying something:

The speaker also confirmed that work is proceeding on a number of other amendments ahead of an expected Thursday floor vote, including boosting tax credits for low-income and older people, allowing states to impose work requirements for able-bodied Medicaid recipients and allowing states to accept fixed block-grant dollars for Medicaid.

Actually, let me pause for a moment here.

The "boosting tax credits for low-income..." part of that sentence is even more confusing.

Originally, one of the supposed plusses of the AHCA was that it would make tax credits easy and simple...because they'd be based purely on age instead of income. Unlike the ACA, where you have to enter all sorts of data/documentation to prove what your income is (and then have to provide further documentation the following year to reconcile any differences between your projections and your actual income), with Trumpcare you would only have to verify your age, which is easily done (and which only moves in one direction).

Then, after the "Bill Gates would get $4,000 he doesn't need!" backlash, they changed their minds and imposed an income-based cut-off after all...starting at $75,000 (620% FPL) and winding down to $115,000 (950% FPL). This isn't a terrible thing, but it does mean that they'd have to verify enrollee income after all, which pretty much wipes out the "age = simpler!" argument, doesn't it? Perhaps it's still easier to verify incomes if you only have to worry about doing so at the upper end? That doesn't make much sense to me, but maybe there's some IRS/tax bracket wizardry which makes it less cumbersome to do so?

Well, assuming that's the case, then if they really do plan on beefing up credits specifically for lower-income enrollees as well, that means they'd have to verify everyone's income at both ends of the income scale...which means, once again, they might as well just leave the existing system in place.

Anyway...whatever. The other point is that Ryan & Trump have now decided that the only way to win over the Freedom Caucus hardliners is to kick even more people off of Medicaid (via block grants) while also making it even harder for people to qualify for the program...even though only 13% of expansion enrollees are "able-bodied and not working":

Only 13 percent of adults covered by Medicaid’s expansion are able-bodied and not working, in school, or seeking work. Of that small group, three-quarters report they are not working in order to care for family members and the rest report other reasons, like being laid off. A much higher share of overall American adults are unemployed or not in the labor force (28 percent), according to 2015 Census data. Medicaid expansion enrollees are more likely to be working or looking for work than the general public, unless they are burdened by ill health or the needs of their families. Moreover, Medicaid expansions could make it easier for beneficiaries to find work, as reported in Ohio.

Assuming that the "having to care for family members" part is also accurate, that means that of the ~13 million enrolled via ACA expansion, only around 430,000 are "guilty" of being able-bodied/not working. Yet imposing work requirements would require an even bigger administrative bureaucracy by the states to double-check the employment status of all enrollees, including (I presume) checking their status monthly instead of annually (twelve times the paperwork!) and so on. Put another way: The GOP is now set to spend a massive amount of time, money and resources going after about 3% of the expansion population for having the audacity of being relatively healthy and between jobs.

I've also heard that Ryan & Co. are thinking of moving up the expansion cut-off date from 2020 up to 2018, which would simply kick millions of low-income people off their coverage even sooner, though that's not mentioned in the Politico story above.

The bottom line is that these changes would actually be better for several million people...but in a completely ludicrous way, while also being even more hurtful to millions of other people, and adding several additional layers of paperwork and bureaucracy to boot, which Republicans supposedly can't stand. Amazing.

UPDATE: Here's the details of the revisions. Read it and weep. Seriously.