How much could 2017 rate hikes impact Senate election results?

Over at Politico, Rachana Pradhan and Paul Demko have an interesting article speculating on the potential for the ACA-as-a-GOP-campaign-issue to spring back to life again due to the one-two punch of major carriers dropping out of the exchanges and significant rate hikes being imposed for the 2017 Open Enrollment period. The fact that #OE4 kicks off (November 1st) just 1 week before election day (November 8th) adds some fuel to this thinking:

The potential sticker shock — coupled with the likelihood many consumers will have fewer choices next year after major insurers scale back their exchange participation — creates a potential political opening for Republican candidates, especially since the next Obamacare enrollment season starts one week before Election Day.

Heck, ACA-hater Sally Pipes has already posted a piece over at Forbes stoking the fire on this very issue, claiming it'll be an "October surprise". Ironically, she uses my own rate hike data, which has been widely disseminated for the past month now, to claim that high rate hikes are going to be a huge shock to enrollees this fall.

Now, as I see it, there are a couple of potential ways the carrier drop-out/rate hike issues could potentially impact the election:

First, the overall, general "Obummercare #FAIL!!" theme, which has been pushed by the GOP for, what, 7 years now (starting well before the law was even passed). I have no way of quantifying any impact there might be on that front. By the same token, I have no way of measuring the impact on people who think that they're going to be negatively impacted by these issues even though they aren't. Poll after poll by various organizations have found that there's a huge chunk of Americans who haven't the slightest idea how the ACA actually works, what it does and how it does or doesn't impact them. Again, I can't do much about that.

What I can measure--to a certain degree--are the number of potential voters whose lives and pocketbooks will be directly impacted by rate increases and/or carrier drop-outs.

This question came up earlier today in a Twitter discussion between Dan Diamond, Richard Mayhew, Tucker Doherty and myself:

@ddiamond @pauldemko @rachanadixit look at membership numbers to see who would be affected, mainly look at non-subsidized pop for impact

I pointed out, once again, that it's not only the 15% of exchange-based enrollees paying full freight who would be impacted, but the 7 million or so people enrolled in ACA-compliant off-exchange policies, who are also paying 100% of the premium costs.

Where do I get 7 million from? Well, according to Mark Farrah Associates, the total individual healthcare market is up to around 20.5 million people nationally. Of that, around 11.1 million were enrolled via the exchanges as of March, with about 1.7 million (15.3%) paying full price. Of the remaining 9.4 million off-exchange enrollees, around 1-2 million seem to be enrolled in grandfathered or transitional plans; the rest are in ACA-compliant policies, which are part of the same risk pool as exchange-based plans.

Here's how this breaks out:

I'm not quite sure whether to "count" Grandfathered/Transitional enrollees, since they're not part of the same risk pool and can mostly stick it out for another year or so.

If I don't include them, I'm looking at about perhaps 9 million people in all. Now, of those who enrolled on the exchange, about 8% are children under 18 who can't vote. Assuming the full-price/off-exchange crowd has a similar age makeup, let's knock 8% off the total and call it perhaps 8.3 million people nationally who a) are enrolled in individual, ACA-compliant healthcare policies but who b) are paying full price for them, either on or off the exchanges.

However, it's actually a bit higher than that. Remember, there's a certain portion of the 9.4 million people receiving APTC assistance who are only receiving a nominal amount of help...$10 or $20/month on, say, a $600/month or higher policy. According ot the ASPE report for OE3, around 8% of exchange enrollees are in households earning between 300-400% FPL. Significant rate hikes will impact them as well, so let's bump it back up to an even 9 million people, give or take.

According to the Politico story, there are 11 states with competitive Senate races, of which 9 have a major carrier jacking up rates by 30% or higher. They don't list all the states, but according to the Cook Political Report, they include:

Next, I've looked up the total number of registered voters in each state (note: these numbers are as of this past spring during the presidential primaries, and count the number of residents eligible to vote, not necessarily registered to do so...although more people have been registered since then and will continue to do so thorugh early November). 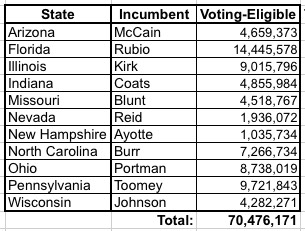 Next, the question is how many of these ~9 million people live in these 11 states. Unfortunately, I have little in the way of data about off-exchange individuals...just snippets here and there (for instance, in Florida, as of 3/31/15, there were 1.28 million people enrolled in exchange-based policies, plus another 375K in ACA-compliant off-exchange policies and 253K enrolled in grandfathered/transitional plans. That means 33% of FL's total individual market was off-exchange at the time. That number has presumably shifted even more towards the exchange-based enrollment by now, but there are other states, like South Dakota, where grandfathered/transitional plans make up a full 33% of the market by themselves...meaning that total off-exchange enrollment is likely over 50% of the total.

Furthermore, two states (Illinois and Nevada) did not allow "transitional" plans to be extended through 2017, so the off-exchange percentage should be a bit lower in those states. For purposes of this entry, I'm going to assume that off-exchange enrollment makes up roughly 40% of the individual market in most states, but only 30% in the states not allowing transitional plans.

Next, I have to look up the percentage of currently-effectuated, exchange-based enrollees in each state receiving APTC assistance, as this varies from state to state. The most recent data I have on this was as of March 31, 2016. Finally, I've plugged in my best estimate of the requested (or approved, in 2 states) average rate hikes for each state. When I do so, here's what it looks like:

As you can see, using my admittedly sloppy, back-of-the-envelope math, it looks like anywhere between 2-8% of the total voter-eligible population of each state are people who are currently paying full price for individual healthcare policies, and will therefore be facing the full brunt of whatever rate hikes they end up seeing in November. Since 2-8% is generally the margin of victory in close races, this is nothing to ignore.

How upset will these people be about this issue? Well, that will depend on their specific circumstances, temperment, politics and so on, of course, but it looks to me like it could be a significant issue in Arizona, Illinois and Pennsylvania in particular; probably not so much in New Hampshire or Ohio. On the other hand, there's also the question of carriers leaving the exchanges; in Ohio, for instance, the loss of InHealth Mutual earlier this year along with Medical Mutual of Ohio dropping all of their PPO plans could also have an electoral impact even if the technical premium rate hikes don't.

As always, there's a lot of big assumptions here about not just the numbers and percentages, but also about who people will actually blame. In Florida, for instance, Patrick Murphy would be wise to remind people that it was Marco Rubio who spearheaded the effort to kneecap the ACA's Risk Corridor program, which led (in large part) to a dozen of the co-ops melting down last year (along with residual damage carried over into 2016 and 2017). Overall, however, I'd expect that if this becomes a real campaign issue at all, it's more likely to be used as an attack point by GOP candidates.