Off-Topic: The internet is a strange and mysterious place.

So, last year, after getting a chuckle out someone snapping up TedCruz.com and posting a pro-immigration reform message on it, I snapped up a few other variables which Senator Maple Leaf missed, such as TedCrooz.com, TedCruise.com and so forth. I figured I'd get a handful of visits from people misspelling his name, but I also kind of assumed that those people would instantly realize their error, seeing how the moment the site loads, it's pretty obvious that not only is this not Ted Cruz's campaign website, the whole site is the complete opposite of everything Cruz-ish...especially in regards to the Affordable Care Act.

Apparently I was wrong. It never fails to amaze me how utterly oblivious some people supporters are to the websites they're visiting. Check out the most recent missive I received over the weekend:

The establishment is counting on Marco to gain enough votes to pull him past Trump and you. I hope there is a plan to counter the Rhinos they are going to come after you and Trump. You are defiantly mine and everyone I speak with their choice to lead this country. I believe you have a tough road ahead. Bush will use his 15 million to back Rubio and so will the little r republicans. I contribute when I can so please don't ask every day.

I'm not even going to get into "Rhinos" and "defiantly mine", and the bit at the end where they plead with Cruz personally to stop spamming/calling them for donations is a bit amusing, but still...really? Remember, aside from the fact that the entire site from the header on down is clearly not related to Ted Cruz, this is what the contact form looks like (see below). How on earth could even the lowest-information voter not grasp that they're at the wrong website? 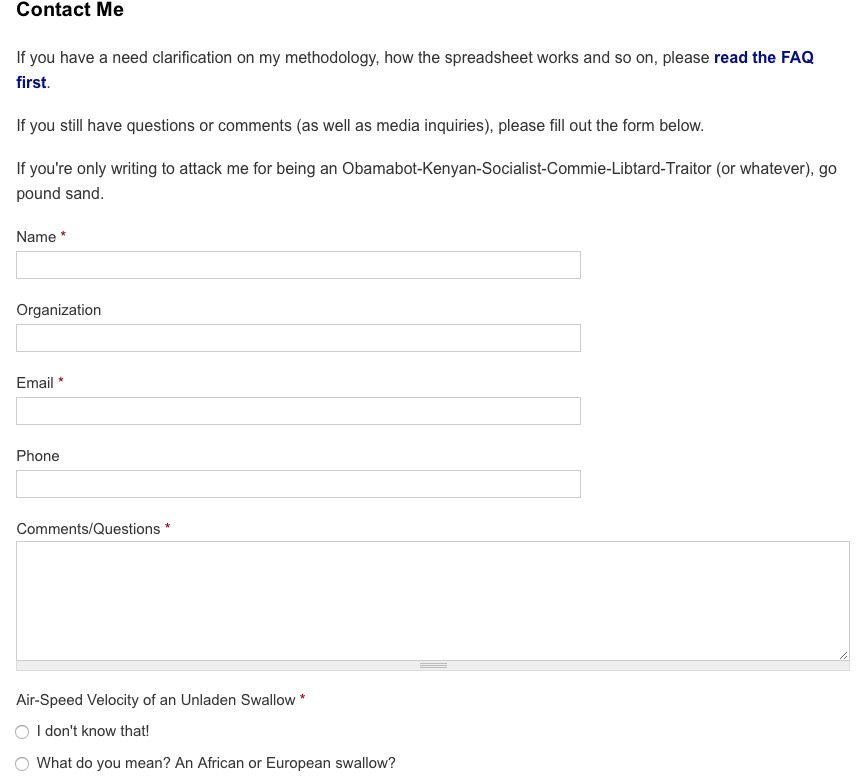 UPDATE: Thanks to commenter "zero" for reminding me to check on something...

Hmmm...only 55% of those who contact me appear to know the proper response to this question. Huh.