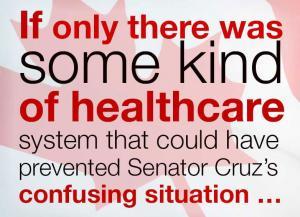 In my latest featured post over at healthinsurance.org, I shoot fish in a barrel do a little fact-checking on Ted Cruz's claims about his own family's health insurance situation.

UPDATE: The Ted Cruz story has taken on an even dumber turn; see follow-up piece here!

On a related note, earlier today I wrote about being proven correct in my projection that while the projected average 2016 premium rate hikes would end up being around 12-13% nationally if everyone renewed their existing policies, if enough people shopped around, the national average would likely end up coming in below 10% after all.

Sure enough, the 8.5 million who enrolled via HC.gov through Christmas (which is likely to be over 60% of the total) ended up with an effective average rate hike of...just 9.1%.

Here's how it breaks out state by state. It doesn't include the state-based exchanges like California, Colorado, etc, nor are any enrollees since 12/26 included, but it still gives a pretty good picture of the overall situation. As you can see, 6 states did get slammed with 20% or higher hikes (ouch), while 10 states came in with increases of less than 5%, and two of them (Indiana and Maine) actually have lower rates on average than last year.

Again, these numbers will likely shift up or down slightly after the remaining enrollees are added in (likely around 5.5 million nationally), but for now, this is where things stand.