Happy New Year! 14 Million of you still have until the end of January to enroll for 2016 coverage!

According to a recent Kaiser Family Foundation study, as of last spring there were still around 32.3 million uninsured people in America, broken down roughly as follows: 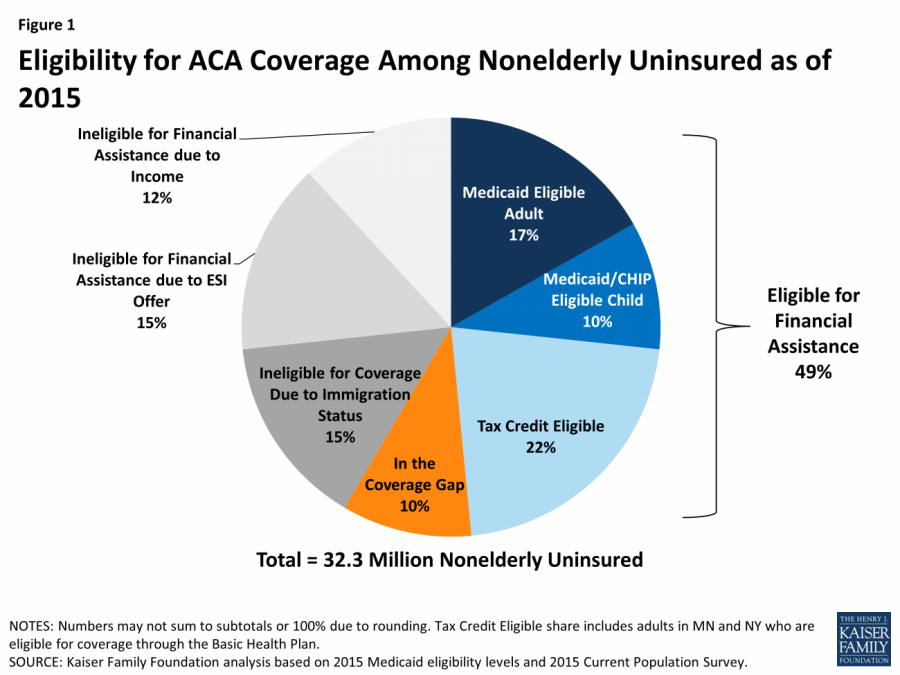 So...add these up and that's around 15.8 million uninsured people who could potentially be added to the exchange QHP total. On top of this, you have those who were already enrolled in exchange policies who may or may not renew/re-enroll for 2016; this number was 10.2 million at the time Kaiser ran their survey, 9.95 million as of June, was down to 9.3 million as of the end of September and was likely down to around 9 million as of December. The 1.2 million or so whose policies were dropped throughout the year changed to a variety of other statuses, so it's hard to say how many of them are technically eligible for exchange coverage in 2016, but let's split the difference and call it around 9.5 million; that means that a grand total of around 25.3 million people should be potentially eligible...of whom I estimate around 11.2 million have already selected 2016 exchange policies nationally (8.6 million via HC.gov, another 2.6 million likely via the state-based exchanges).

Obviously some of the other numbers have likely shifted around since last spring as well; Medicaid enrollment has risen by 625,000 people since April, for instance (from 71.2 million to 71.8 million), while ESI coverage may have gone up or down, and so on. However, assuming no major shifts, this leaves just over 14 million uninsured Americans who still have 31 days to enroll in policies through the ACA exchanges in time for coverage starting on either February 1st (enroll by 1/15 in most states, 1/23 in the rest) or March 1st (enroll between 1/16 - 1/31 in most states, 1/24 - 1/31 in the rest).

There's also a good 6-7 million people who were enrolled in off-exchange individual policies last year who could potentially shift over to exchange-based policies (whether at full price or with tax credits), but again, many of these folks have presumably renewed/re-enrolled in off-exchange policies or moved to ESI coverage, Medicare, etc etc. Others may have already moved to the exchanges for 2016, so this is truly an unknown factor.

My official projection from late October assumed a total of 14.7 million people will have done so by the end of Open Enrollment. Subtract the 11.2 million who have already done so and that means an additional 3.5 million will have to do so between now and the end of January to hit my target, although I've already explained that this could be up to a million people fewer and I'd still be "correct" (from a certain point of view).

How many will do so? The clock's ticking...