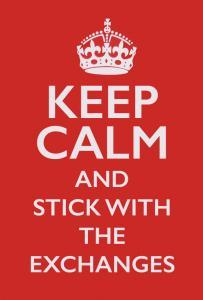 The announcements came the day after UnitedHealth cut its earnings forecast and said it might exit the Obamacare exchanges in 2017. It said it was losing money on that business because of low enrollment and high costs.

Anthem remains committed to the exchanges and to "continuing our dialogue with policymakers and regulators regarding how we can improve the stability of the individual market," Chief Executive Officer Joseph Swedish said in a statement.

...The earnings affirmations echo that of Centene Corp and Molina Healthcare Inc. The small health insurers, which focus on Medicaid, also said its exchange business was performing in line with its expectations.

Molina CEO J. Mario Molina said that Molina was targeting low-income people, similar to its Medicaid patients, and that it was not having the same problems as UnitedHealth.

Kaiser Permanente, a hospital and insurer system, also said that it was "strongly committed" to the exchanges.

As a reminder, here's where the currently-effectuated exchange enrollment numbers stood as of 9/30/15 for 8 major insurers...including 5 of the 6 companies listed above:

OK, so that's one company with 540,000 enrollees pulling the panic button (UnitedHealthcare) vs. 5 companies with a minimum of 2.25 million exchange enrollees reassuring people (I don't know what Kaiser Permanente's enrollment numbers are this year, but a year ago they had 240,000 effectuated enrollees in California alone; I presume that this is higher for 2015).

By my count, that's about a 4.2 to 1 advantage for the "Keep Calm and Stick With the Exchanges" crowd, at least for now.