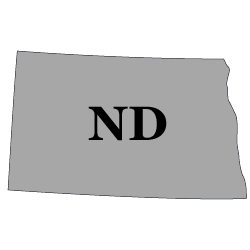 As I just noted re. South Carolina, Louise Norris has picked up the ball on my "weighted average rate hike" project and seems to be filling in some of the missing pieces using my own methodology. Here's what she comes up with for North Dakota:

Rates for 2016 won’t be finalized until late summer or early fall, but of the three carriers that participated in the exchange in 2015, two – Blue Cross Blue Shield of North Dakota and Medica Health Plans – have requested double digit rate increases for 2016. BCBS of ND has proposed an average rate increase of 18.4 percent for their 29,000 individual market policy-holders (including on and off exchange plans) BCBS of ND has 70 percent of the on-exchange market share in 2015.

Medica has proposed an average rate increase of 16.5 percent, for an estimated 4,778 members, including on and off-exchange.

Sanford’s proposed rate increases were less than 10 percent, as they do not appear on Healthcare.gov’s rate review tool.

...As of September 2015, the North Dakota Insurance Department reported that effectuated enrollment through the exchange was:

Those numbers are from September and the number of covered lives mentioned in the rate filing data is from several months ago, but we can roughly estimate that BCBS has an additional 17,279 off-exchange enrollees, while Medica has 1,711 off-exchange enrollees. Sanford’s rate increase filing’s aren’t public, as they’ve requested a rate increase under 10 percent. But their on-exchange market share is only 11 percent of the total exchange enrollees, so their proposed rate change won’t have a dramatic effect either way in terms of the overall weighed average.

Assuming the proposed rates are approved as-is, the worst-case scenario weighted average rate increase in the North Dakota exchange is 17 percent. That’s assuming a 9.9 percent rate increase for Sanford; the overall weighted average could be slightly lower if Sanford’s rate change ends up being significantly lower than 10 percent.

If we consider the off-exchange market too, the weighted average rate increase is slightly higher, given BCBS’s high number of off-exchange enrollees. For simplicity, I’ll assume that Sanford’s business is split 50/50 on and off exchange; in that case, the worst-case scenario weighted average rate increase for the entire ACA-compliant individual market in North Dakota would be about 17.3 percent.

My own methodology assumes a total 2015 individual market of around 50,600, which would require Sanford to have a disproportionately high number of off-exchange enrollees (around 15,000 of them). This is certainly possible, as some carriers compete heavily off-exchange but not very much on-exchange, but Louise knows her stuff, so I'm very hesitant to assume too much here. If I knock 10K off the grand total, I get the following (note that while Louise uses the "worst-case" scenario as her official call, I'm more optimistic and assume the "mid-range" figure):

UPDATE 9/28/15: OK, Louise has confirmed that Sanford has fewer than 300 off-exchange enrollees in North Dakota. That means their total is only around 2,200, meaning that their under-10% rate hike request will only have a nominal impact on the state-wide weighted average. Here's what it looks like now: Around 17.5% (man, Louise is better at this than I am!) 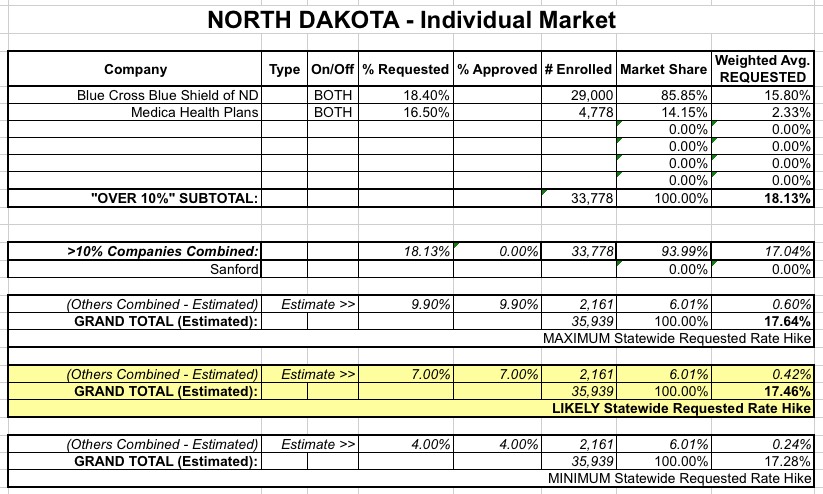 As always, this assumes that everyone stays with their current plan and doesn't shop around.

North Dakota is also a good example of just how huge the caveats I'm dealing with are here. I've been operating (based on evidence from a handful of states) on the assumption that unless confirmed otherwise, about 5% of the current individual market enrollees are in "grandfathered" policies, with another 9% enrolled in "transitional" policies in states which allowed them...and for the most part this seems to be about right.

In the case of North Dakota, however, a whopping 61% of people enrolled in pre-2014 policies stuck with them (hat tip again to Norris!)...and judging from the total enrollment numbers above, it looks like there are upwards of 13,000 people still in either grandfathered or transitional plans at the moment:

I say this because according to the Kaiser Family Foundation, ND had 49K total enrolled in individual policies in 2014. This probably grew in 2015, but even if it stayed the same, that's still 27% enrolled in non-ACA compliant policies at the moment.