Remember back in March when the Assistant Secretary for Planning and Evaluation (ASPE) released a report stating that there's been a net increase of 16.4 million people with health insurance coverage specifically due to ACA provisions since it was signed into law in 2010?

At the time, I stated that as much of a supporter as I am of the ACA, I was a bit uneasy with this particular estimate, mainly due to the 2.3 million "Young Adults on Parents Plan" portion of it:

Today, a year later, the official number claimed by the HHS Dept. is 2.3 million...which on the one hand is right in the middle of the range I settled on (seriously...it's right in between 1.6 and 3.1 million)...but on the other hand, it's also a good 800K lower than the 3.1 million they claimed for the better part of a year.

However, my concerns about the "Sub26ers" were allayed by Larry Levitt of the Kaiser Family Foundation, who stated (via Twitter) that:

"All these estimates have some uncertainty around them, but the 2.3 million figure for young adults is defensible...The under 26 provision had taken effect by 2013, so whatever the estimate is, it should be in addition."

In the end, I accepted the 2.3 million Sub26er figure after all.

A total of 17.6 million people have gained coverage under ObamaCare, according to a revised government estimate released Tuesday.

The newest figure, which is based on national survey data, shows that 1.2 million more people had signed up for healthcare over the last five years than previously thought.

OK, so the 2.3 million chunk hasn't changed. Fair enough; that leaves 15.3 million via the ACA exchanges, Medicaid and the individual off-exchange market, up from 14.1 million:

In other words, an increase of off-exchange individual enrollment IS INCLUDED here.

Unfortunately, the actual ASPE report doesn't break the 15.3 million out between the three categories, so I'll have to speculate, but here's my best guess:

As for the net 1.2 million overall increase since the March report, I'm assuming that a good million of that comes from Medicaid (again, the net strict-expansion portion of the Medicaid increase went up from 8.5 million to 9.5 million between February and June). 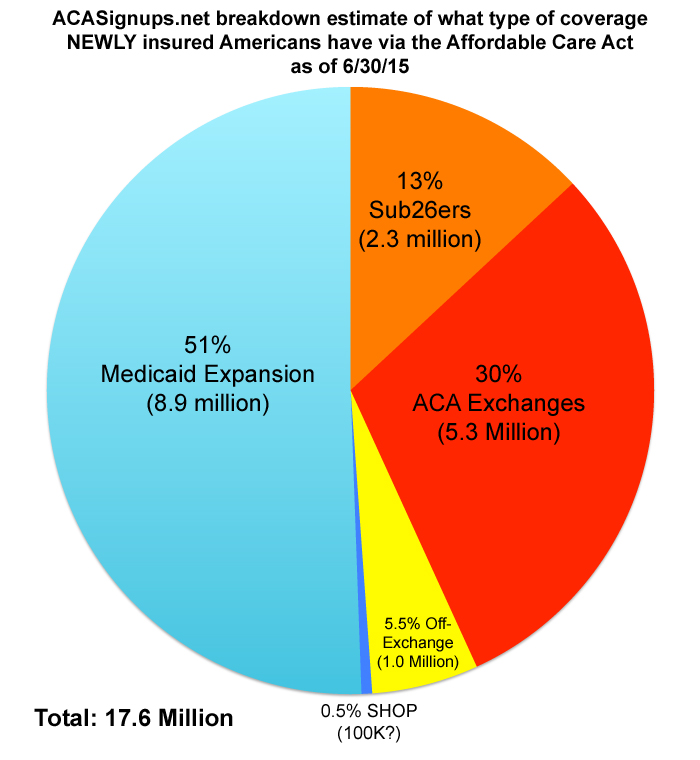