OK, I do have one very quick post this afternoon, and believe it or not, it ties this morning's historic Supreme Court ruling allowing marriage equality for same-sex couples with yesterday's ruling on ACA federal tax credits.

How? Well, the HHS Dept. just posted this on Twitter:

Love is Love. Remember that getting married means a new opportunity to #GetCovered → http://t.co/cue4tnChCM pic.twitter.com/TfoNPOOR32 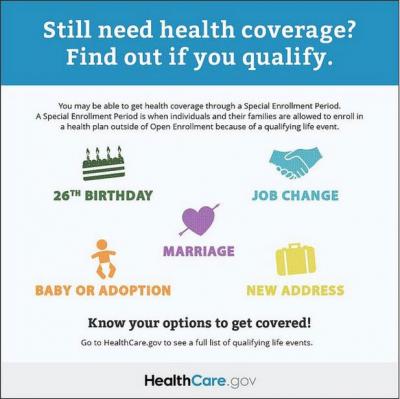 At around the same time, HHS Dept. spokesman Aaron Albright posted this:

For coverage starting in 2015, an insurance company that offers health coverage to opposite-sex spouses must do the same for same-sex spouses.

As long as a couple is married in a jurisdiction with legal authority to authorize the marriage, an insurance company can’t discriminate against them when offering coverage. This means that it must offer to same-sex spouses the same coverage it offers to opposite-sex spouses.

This is true regardless of the state where:

The Marketplace also treats married same-sex couples the same as married opposite-sex couples when they apply for premium tax credits and lower out-of-pocket costs on private insurance plans. This is true in all states.

When you apply for help paying for coverage in the Marketplace, you’ll be asked if you’re married. If you and your spouse plan to file a joint federal tax return for 2014, select “yes.”

So. What impact, if any, will this have on off-season enrollments?

Well, prior to today, my estimate of off-season QHP selections this year has been roughly 7,500 per day.

Now, I don't know exactly how many people in the U.S. are homosexual; I've heard estimates from as low as around 2% to as high as 10%. Obviously some people don't like to discuss their sexuality, others may be confused about it, others yet are bisexual, transgender and so forth and don't easily fit into one category or the other, but let's say that around 5% of the total U.S. population could reasonably be included, or around 16 million people.

Of those, let's assume the age demographics are roughly the same among this subset of the population as the country as a whole. The eligible pool of those who could potentially enroll in private ACA policies is estimated by the Kaiser Family Foundation at around 29 million or so, or around 9% of the country. Let's again assume that these demographics are similar; that's around 1.45 million. Finally, nationally, around 10.3 million of those 29 million are already currently enrolled, or 35.5%. Once again, I have no idea whether a similar proportion of the homosexual community is among those, but assuming they are, that's around 500,000 out of 1.45 million who are already enrolled, leaving around 950,000 homosexual American citizens (or legal residents) who are not currently covered by an ACA-compliant healthcare policy.

Now, this is further complicated by the fact that a bunch of states already had/have legally-recognized same-sex marraiges (plus, there are some number of people who are homosexual but are married to someone of the opposite gender anyway, etc). And, of course, legalizing same-sex marriage doesn't automatically mean that every gay person is going to rush out and do so; some are single, not ready for marriage, whatever. Plus, of course, about 23% of them are likely children under 18, who would only be enrolled if their parents/guardians did so and brought them along for the ride (plus some number of 19-26 year olds).

What's all of that cut it down to? Hard to say...perhaps 1/4 of this group is composed of adult gay/lesbian folks who intend on getting married, or around 250,000 nationally? Perhaps this would be lower...but then again, some of those folks would also have children who'd be added to the total as well, so it sounds about right to me.

Next: Not all of these people are planning on getting married immediately (ie, this year), but judging by the massive activity going on at the moment and the fact that some of these people have been waiting years or even decades to get hitched, I'd say we're probably looking at least half of them getting officially married over the next few months...call it 150,000?

Finally, the other question is, how many of that group will use their newfound status to actually enroll in a Qualified Health Plan via the ACA exchanges? Not a clue, but I'm comfortable with perhaps an even 100,000 or so.

In short, there's no way of knowing what impact today's ruling will have, and many of my estimates above are completely pulled out of thin air, I admit, but I wouldn't be surprised to see a minor bump in effectuated exchange enrollments of perhaps 100,000 people nationally over the summer and early fall, bringing The Graph from a steady average of 10.3 million up to around 10.4 million.

Now that the Supreme Court has ruled that the Constitution guarantees a right to same-sex marriage, U.S. employers may shed same-sex domestic partner coverage to cut costs, say benefits consultants already working with employers on such moves.

The idea behind same-sex domestic partner benefits arose in the 1990s during an economic boom and period of full employment with employer after employer adding same-sex domestic partner workplace benefits as a way to “equalize the treatment of same sex couples and opposite sex couples,” J.D. Piro, senior vice president in the Aon Hewitt (AON) health law group said in an interview.

Offering same-sex domestic partner benefits was a key recruitment and retention tool for employers to attract gay and lesbian workers, but it also brought an added layer of administrative and legal bureaucracy that was a new expense to employers. The high court’s 5-4 ruling may now lead companies to cut costs and bring an end to the separate domestic partner benefit apparatus created two decades ago in their human resources departments.

In other words, there may be several hundred thousand (perhaps a few million?) homosexuals nationally who have, until now, been covered by employer sponsored insurance policies via their domestic partners employed by the companies. Over the next few months (or perhaps not until 2016? I'm not sure when this would take effect), they'll presumably be kicked off of those policies until they're officially married to those partners. This is good news for the ACA exchanges in two ways:

Either way, this should pad the enrollment numbers even more than I had figured last night.

UPDATE x2 6/29/15: OK, here's Kaiser Health News with a different perspective; they point out that the Obergefell v. Hodges ruling should also result in a significant increase in Employer-sponsored insurance enrollment overall:

The right to marry in any state won’t be the only gain for gay couples from last week’s Supreme Court ruling. The decision will probably boost health insurance among gay couples as same-sex spouses get access to employer plans, say analysts and benefits consultants.

How much is unclear, but “it’s going to increase coverage” in a community that has often had trouble getting access to medical services, said Jennifer Kates, a vice president at the Kaiser Family Foundation. (Kaiser Health News is an editorially independent program of the foundation.)

The logic is simple. Fewer than half of employers that offer health benefits make the insurance available to same-sex partners who aren’t married. Virtually all of them offer coverage to spouses.

It sounds to me like the most likely pattern will be for off-exchange QHP enrollment to increase temporarily for the remainder of 2015, followed by an increase in ESI enrollment which may actually cancel out any gains on the ACA exchange side (that is, there may be a significan number of gay folks who are currently covered via individual private policies while their partners are covered by ESI, who get married and move to ESI, thus lowering the number on individual policies after all).

Overall, it sounds like while the type of coverage may shift around significantly, the overall effect will be a further increase in total coverage (which, after all, is one of the larger goals of the ACA anyway).

UPDATE x3 6/29/15: Well, whaddya know? It turns out that shortly after I posted the original version of this entry, the New York Times posted a story at The Upshot which actually dug into the hard numbers (or at least more statistically accurate estimates) on unmarried same-sex couples, and here's what they found:

Before the ruling, same-sex marriage was not legal in 14 states (including Alabama, where the issue was in dispute), home to about one in four same-sex couples, according to an analysis of 2010 census data by Gary Gatesof the Williams Institute at U.C.L.A.

In all, about 150,000 couples live in these 14 states. The court’s decision has an immediate effect on their options. In the longer term, it could affect the geography of gay America, by creating one law that applies to every state.

Over the last year, according to the Williams Institute, the number of legally married same-sex couples in the United States has tripled, to about 390,000. An additional 600,000 or so such couples are not married.

So, according to the NY Time piece, there's actually around 600,000 unmarried same-sex couples nationally...which means around 1.2 million total (although that doesn't necessarily guarantee that all of them plan on getting married, of course).

However, since couples in 36 states have already been able to get married for anywhere from a few months to over a decade (well...sort of; obviously some of the more recent conservative-leaning states have still been fighting tooth & nail to discourage or prevent same-sex couples from getting married even if it's been officially legal for awhile), the more relevant number is the 150,000 couples in the 14 states just added to the tally by the Supreme Court. That's 150K couples or 300,000 people.

As it happens, my own very rough estimate above just happened to be...250K "adult gay/lesbian folks who intend on getting married nationally", of whom I figured around 100K are likely to both a) get married very soon and b) enroll via an ACA exchange due to the life change.

Again, still a lot of variables (being a couple doesn't necessarily = "wanting to get married", and many of those 1.2 million people are obviously already covered by ESI, Medicare, Medicaid or are already enrolled in an individual policy QHP, but I'd say my ballpark estiamte of around 100K still sounds about right.