UPDATED: My Best Estimates of the Entire Individual Insurance Market as of the end of 2014

First, I have to clarify that while the data from the first and second (numeric) columns (and therefore, the third as well) are pretty solid, I'm still making a lot of assumptions for the 4th, 5th and 6th columns below.

The numbers in the first column (2014 EOY Total) come from the just-released Kaiser Family Foundation Data Note, which in turn is based on the Health Coverage Portal by Mark Farrah Associates. That's the total number of people enrolled in private, individual healthcare policies, regardless of whether they were purchased via the ACA exchanges or not.

The second column (2014 EOY Exchange (Estimate)) is my best estimate of how many people had effectuated enrollments through the ACA exchanges as of 12/31/14. Those are all important caveats. These numbers are based on the following:

The third column (2014 EOY OFF-exchange) is simply the difference between the first two columns, rounded to the nearest thousand to keep things simpler (there's a lot of rough estimates here anyway, so rounding up or down by a few hundred doesn't impact things much).

The fourth column (2014 EOY OFF-exchange QHPs) is my best estimate of how many off-exchange enrollees were in ACA-compliant policies. This mainly refers to "QHPs" (Qualified Health Plans), but in a few cases may be other policies which aren't technically "QHPs" but still comply with all of the ACA minimum requirements. This should have totalled roughly 6.0 million even as of the end of December. SEE UPDATE

The fifth column (2014 EOY Transitional) is my best estimate of how many "Grandmothered" or "Transitional" policy enrollees there still were as of the end of 2014. These are policies which were supposed to have been cancelled at the end of 2013, but which were extended due to the Obama administration's damage control waiver announcement in response to the "if you like your plan you can keep it!!" debacle. Based on the very limited data I have so far, I'm estimating that roughly 30% of all off-exchange enrollees (in the states which allowed them at all) fall into this category. SEE UPDATE

It's important to note, however, that 16 states didn't allow transitional policies at all (or did but with very tight restrictions).

Finally, the last column (2014 EOY Grandfathered) are my estimate of how many people were still enrolled in "Grandfathered" policies at the end of last year. These are policies which were in place and enrolled in prior to the ACA being signed into law in the first place back in 2010. I'm estimating these at roughly 10% of the total for states which allowed transitional policies and 18% of the total for states which didn't allow them. SEE UPDATE

MAJOR UPDATE: A huge shout-out to "rebeccastob" via Twitter, who brought my attention to this official memo from the Centers for Medicare & Medicaid Services (CMS), which provides the actual percentages of the individual market which made up "Transitional" policies as fo 2014 in each state!

Needless to say, I was way off-base with my ham-handed, across the board "30% transitional / 10% grandfathered" estimates above.

Unfortunately, there's a big catch: The percentages in the memo are based on the "non-grandfathered, ACA-compliant market in each transitional state" only.

In other words, let's say a state has 100,000 total individual market enrollees, both on and off the market, of which 50,000 are via the exchange, and the CMS memo has Transitional enrollees at an even 10%. If this was 10% of the total, that'd be easy: 10,000 people, leaving 40,000 to be divided among off-exchange QHPs and off-exchange Grandfathered.

The problem is that the percentages require me to first subtract the Grandfathered number...which I don't know either.

However, without knowing the Grandfathered number, it becomes trickier (though still more accurate than I had it yesterday).

What I do know is that based on the CMS memo percentages, the maximum theoretical number of Transitional enrollees there could have been at the end of 2014 was around 1.5 million, and that assumes that there wasn't a single Grandfathered enrollee left anywhere, which is obviously not the case.

For the moment, I only have 1 state to use as a guideline (Florida). Florida did provide the exact numeric breakdown of all of these categories as of last August. At that time, Grandfathered plans made up appx. 9% of the total (144,656 / 1,561,919). While the total numbers changed by the end of the year, I'm assuming that the ratio of those numbers didn't shift much, though I could be wrong about this.

Even if Grandfathered plans did still make up 9% of the total by the end of the year, it also doesn't necessarily follow that this is representative of other states; as you can see in the CMS memo, the Transitional percentages are all over the map (from as low as 0% to as high as 54%), so Grandfathered plans percents could be equally erratic. However, it's all I have to go on at the moment.

That being the case, here's the heavily revised estimate of the breakdown nationally, assuming that 9% of all policies were still Grandfathered as of December 2014:

The ratio between the last two numbers (Transitional and Grandfathered) is what I'm most uncertain about. For instance, if it turns out only 5% of the total were still Grandfathered, that would shift the numbers to 6.7M Off-Exchange QHPs, 1.4M Transitional and just 800K Grandfathered, so if anyone has any hard numbers for Grandfathered enrollments as of December, I'm all ears and will be happy to recalculate all of this again.

For now, I'm just working with the data I have to the best of my ability. 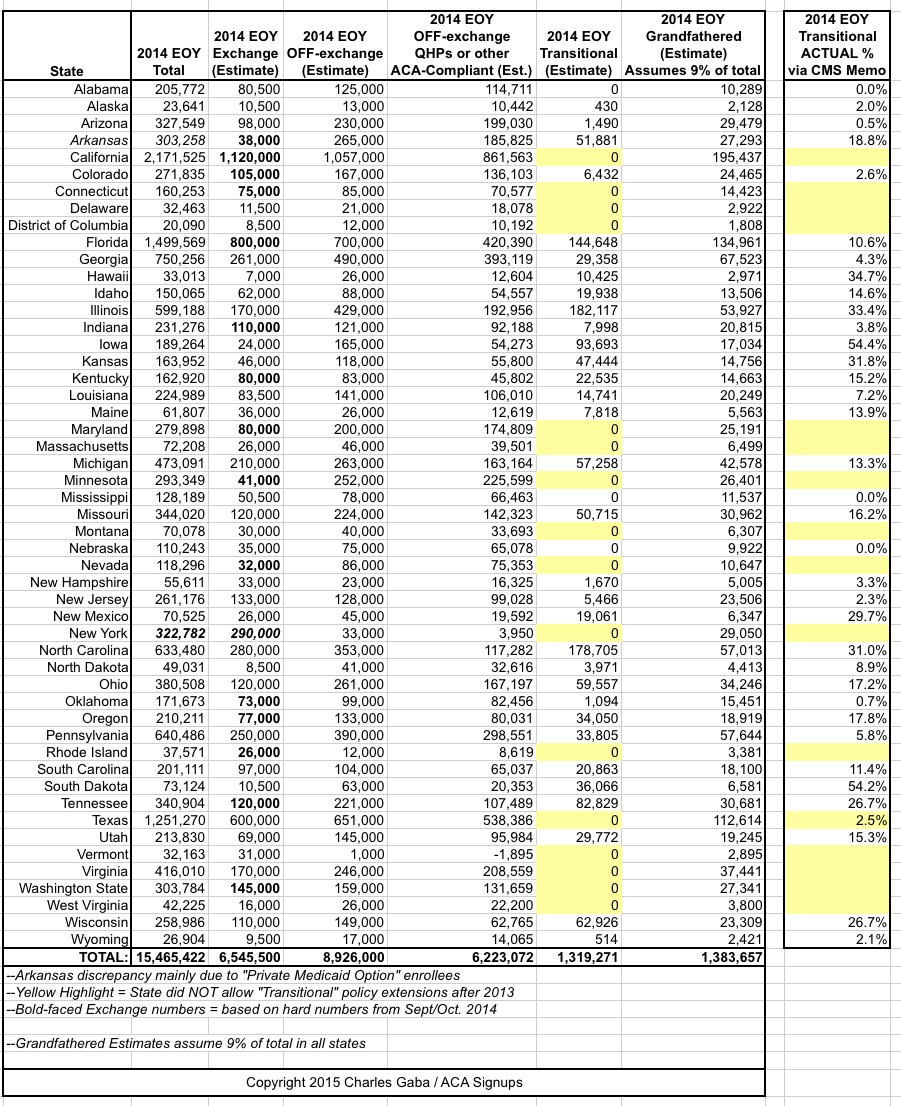