The ACA is not, by any means, a perfect law. As a single-payer advocate, I find it ironic and a bit absurd that I've received so much praise and attention over the past year and a half for meticulously tracking the enrollment numbers every day...when none of that tracking would even be necessary if we simply shifted to a single-payer healthcare system of some sort. I've made this point before, of course.

Still, the fact remains that the law is generally working, for the most part, and while parts of it are pretty confusing, there are some parts which quite simply aren't. Yes, the law should be as easy to understand as possible. Yes, there are plenty of situations where the government, the insurance companies, the exchange personnel, the brokers/navigators or even the hospitals/doctors are to blame for errors, but I'm not addressing any of those cases here.

However, at the end of the day, the actual enrollees do need to take some bare-minimum level of personal responsibility for their decisions.

Why am I bringing this up? Because of this story by Louise Radnofsky from the Wall St. Journal:

The tax filing season has uncovered lingering wrinkles in the 2010 health-care law that have caused headaches for consumers who incorrectly estimated their income, didn’t use a government exchange to buy an insurance plan or changed coverage during the year.

The WSJ story mainly consists of 3 case studies, one example each of the situations listed above. The first woman apparently missed about $9,000 when estimating her income; this is an understandable error, and I don't blame her for being upset, though she's quoted as referring to it as "kind of a trick". I'm willing to give her a pass, however, since it sounds like she made an honest mistake.

The third story is about a New York woman who dropped her coverage after just 1 month last year when she switched to employer-sponsored insurance. An error on the part of the NY exchange apparently made her worry that she'd have to pay back credits for the full year, but it was eventually straightened out.

However, the second story is the one which sparked this entry:

Dave Kitenplon of St. Petersburg, Fla., had planned to claim as much as $14,000 of tax credits toward premiums he had already paid. But he found out he isn't eligible for the credits because he didn’t use HealthCare.gov to buy his health plan. Florida didn’t set up its own exchange.

Mr. Kitenplon, 63 years old, said his income as an accountant for family-owned real-estate partnerships was uncertain. So for 2014 he opted to pay the full monthly premium for himself and his wife for a plan sold both on and off HealthCare.gov and claim any credits he qualified for after.

He doesn’t see why consumers should be required to use HealthCare.gov or miss out on credits. The policy, he said, should be changed—especially since the website wasn’t working well for the 2014 open enrollment season.

“There’s no logic to it,” said Mr. Kitenplon, who signed up for insurance for this year through the website. Federal officials said the requirement to buy through the site was clear, and important because it allowed the government to check whether people were eligible for credits.

Let me get this straight. He's an accountant, which means that he should be well aware of major changes in federal tax law (yes, he's a real-estate accountant, not a healthcare specialist, so I'm not saying that he should know every detail...but come on; the ACA's Advance Premium Tax Credit (APTC) has been huge news for several years now. I know a lot of people are still clueless/confused about the law, but this guy should absolutely have known at least the basics about the APTC...and one of the most basic rules about it is "You only qualify if you enroll via the ACA exchange" (in his case, Healthcare.Gov).

Are there exceptions? Yes; some authorized brokers such as eHealthInsurance.com and GoHealthInsurance.com, among others, have special arrangements allowing people to enroll using their services and still receive the credits...but even then, those brokerages are still actually using the ACA exchange itself for the actual enrollment process.

What irritates me is that unless there's more to the story, this guy apparently didn't even bother to check.

Now, it's possible that the broker he did use, or the insurance company itself flat-out lied to him about qualifying...but if that was what happened, then I'm pretty sure he would've mentioned it to Ms. Radnofsky.

Assuming that's not the case, however, then either this guy--an accountant, remember--just assumed that he'd receive a $14,000 tax credit without bothering to double-check about whether that was the case or not.

I should note that my original angle on this blog entry was that Mr. Kitenplon appears to have been the one at fault here, not the government or the law itself...but after thinking it through further, there's something else very strange about his situation as described.

The article specifies that the policy he enrolled in was for "himself and his wife". No dependent children are mentioned, which would also be a key factor.

I had to guess at his wife's age and their precise zip code, but it should be somewhere in that range. In fact, if his wife was significantly younger than he is, their subsidy would be lower, and if she's more than 2 years older she'd qualify for Medicare anyway: 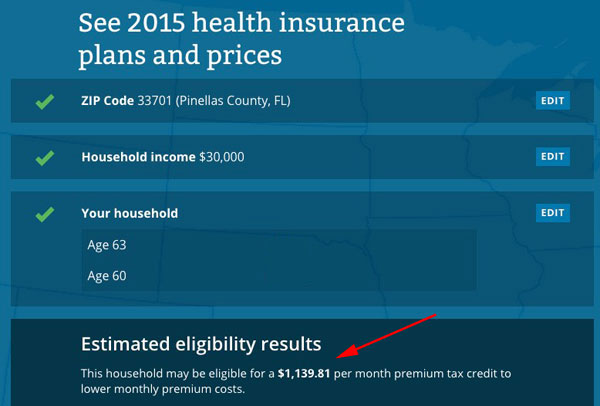 I'm not trying to beat up or make fun of Mr. Kitenplon here, really. I'm not accusing him of being a "plant". I'm just trying to understand his situation, because the info in the story itself just doesn't add up.

An accountant who projected his total income to be only be around $32K for 2014 thought that he'd qualify for a $14K tax break and didn't bother to check it out to be certain? Think about that for a moment. Does that make any sense whatsoever?

Now, as for his griping that the credits "should" be provided whether or not you enroll via the exchanges, as noted in the story, the government kind of has to be certain that you are who you say you are and that your income is what you claim it is before doling out $14K from the Treasury.

He does have one valid point here: The HC.gov site was pretty crappy in the fall of 2013, though the story doesn't specify when exactly Mr. Kitenplon enrolled in his policy (the site was a disaster in October and part of November, but was mostly cleared up by around Thanksgiving 2013).

However, not even going through the trouble to check into it, and remaining unaware that off-exchange enrollments don't count for the tax credits for nearly a year and a half evne though it's been clearly stated (as noted by the "federal officials" cited in the story) over and over again that you have to enroll through the exchange to qualify? Yeesh.

UPDATE: OK, I might have figured out the source of part of my confusion. I assumed from the article that Mr. Kitenplon had projected his 2014 income such that he and his wife were expecting to receive $14,000 in federal tax credits. The exact wording of the article says that Mr. Kitenplon planned to claim "as much as $14,000" in credits, but I was operating on the assumption that the "as much as" simply referred to the fact that if they had chosen a Bronze or Silver policy which costs less than $1,166/month, their actual credit would still only max out at $1,166 regardless (after all, the IRS isn't going to give you a credit higher than the full-price premium!)

However, upon thinking it through further, what this likely means is simply that the maximum possible tax credit for Mr. Kitenplon and his wife would have been around $14K if their income happened to be at the low end of the income range.

That's still a big chunk of money to casually assume you'll be receiving without double-checking (again, especially for an accountant), but it at least makes it a little more reasonable to me.