Dammit, my #ACATaxTime estimate was a SPITBALL PROJECTION. 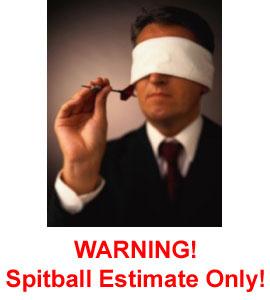 Some of my projections/estimates I'm pretty confident in. Others are more shaky, and once in awhile I'm just doing the best I can given extremely vague, partial data to work with. And when it comes to unknown factors, I make that point as clear as I can.

On March 15, the first day of the #ACATaxTime special enrollment period, I stated the following:

...aside from the King v. Burwell SCOTUS decision (which isn't expected until sometime in June), the other Big Mystery is just how many people a) qualify for the #ACATaxTime SEP, and b) how many of those will actually enroll during this (roughly) 6-week period.

After a TON of patching together data points here and there and discussing/debating the factors with other healthcare wonks/reporters, I stated:

OK, so with that out of the way, how many will enroll? Well, again, there's absolutely no way of knowing, but for my part, a couple of weeks ago, after an initial pulled-out-of-my-butt 1.8 million, I spitballed an even 1 million.

After some more number crunching based on the extremely limited data available at the time, I decided to settle on a very wide range of between 600K - 1.2 million:

Seriously, folks...how many more G**D***** caveats/disclaimers did I have to throw in there?

True, except that there will also be other people enrolling who don't qualify for the tax season SEP...but who do qualify to enroll due to qualifying life events (getting married, giving birth, losing their existing coverage, moving to a new state, etc.). Last year that averaged roughly 8,000 - 9,000 people per day during the off-season. This year, even assuming that it's only around 5,000 - 6,000/day, that would still be a good 220K - 270K during that 45-day period.

Add those to the "Tax Season-specific" enrollees, and you get a likely 45-day enrollment total of between 650K - 1.13 million people...right in the same zone that I'm expecting.

Cut to today's news that only 36,000 people enrolled 1) via Healthcare.Gov; 2) during the first 15 days of the tax season enrollment period; and 3) who qualify specifically due to the tax season rules, not including those who qualified due to major life events (marriage/divorce/birth/adoption/coverage loss/moving/etc).

I crunched all sorts of numbers, showing all of my work, to make it clear that while this is certainly way below my expectations, the total number of additional QHP selections (including the 10 state exchanges which were also participating during that time period as well as those in all states who enrolled via life events) is likely much higher:

I also noted that I hadn't taken a "slow start/surge at end" approach for the tax season SEP (the way I knew the open enrollment pattern would go) because I honestly don't know enough about tax season patterns to speculate. Do most people still scramble to file at the last minute these days? Even if they do so, are the "late scramblers" the same types of people a) likely to be uninsured; b) likely to have to pay the non-coverage fee; and c) likely to actually enroll during the special period? I had no clue, and my estimate was so vague already that I just went with a straight-line projection.

All of this was explained very clearly...and to their credit, many of these points were included in stories like Dan Mangan at CNBC and Peter Sullivan at The Hill.

...none of which made a damned bit of difference in the dreaded comments section, where there's crap like this:

"ObamaCare sign-ups expert Charles Gaba had estimated that 220,000 people would have signed up by March 29."

Missed it by that much #LULZ

"For the Obamacare supporters, time to take another victory tour around the Rose Garden and proclaim they have exceeded expectations yet again. 16% of the goal is about 10% better than expectations!"

Yes, I realize that reading the comments section on most websites (not this one, of course!) is usually a terrible idea, especially on a mainstream news site.

Yes, I realize that there's a lot of idiots, clueless, ignorant trolls etc. out there.

Still...this one bothers me. It bothers me because people take my projections seriously these days, and no matter how many caveats, disclaimers, warnings and cautions I throw out there, in the end a lot of people will still simply hear "Projection was 220K. Actual was 36K. ObummerCare BLOWZ HA HA HA HA HA Kenyun Muzlim Soocializt!!!"

None of that matters, because in the 140-character communication age, if it doesn't fit in 1 Tweet, it's ignored.

In the end, apparently Mr. Albright had it right. Instead of taking my best crack at it based on such limited information, perhaps I should have simply thrown up my hands and said:

...because there IS no way of knowing until April 30th has come and gone.