Regular readers know that I've been a bit obsessed with hunting down the Mysterious World of OFF-exchange QHPs®...enrollees in fully ACA-compliant individual policies which aren't run through the exchanges (ie, no tax credits), but directly through the insurance companies themselves (Blue Cross, Aetna, whatever).

As I noted in my recent piece for healthinsurance.org, last year off-exchange QHPs ended up being a bit higher than as on-exchange: Around 8 million, give or take. However, this was just a rough estimate patched together from various data points, and even then it's likely that some number of those were the so-called "grandfathered" plans (which can continue indefinitely until the enrollee dies or cancels/stops payment) or the "transitional" (aka "grandmothered") plans, which are the ones which were supposed to be discontinued on 12/31/13, but were given up to a 3-year extension period depending on the state and insurance company.

Anyway, for this year, I still have very little off-exchange data so far; only Oregon is providing regular updates on their current off-exchange enrollments, with a few other states reporting them from various points in 2014...which is handy, but doesn't tell us much about the 2015 situation, where things have changed dramatically. Today I can add Louisiana to the list; they've provided me with their off-exchange numbers, but they're only current through 4/30/14, which is basically immediately after the close of the 2014 open enrollment period. With attrition/etc this likely shifted by the end of the year, and 2015 is no doubt very different as well, but it's all I have for now.

Having said that, here's where things stand with the states I do have info for:

Florida currently has 1.34 million on-exchange QHPs. IF the ratio is still around 84/16, that means they should have roughly 255K off-exchange QHPs...but there's no way of knowing whether the ratio has stayed the same for 2015.

Washington State currently has about 127K exchange-based QHPs. IF the ratio is still 46/54, they should have around 149K off-exchange QHPs.

Nevada currently has 56,421 via HC.gov. If the ratio holds at 22/78, they would have a whopping 200K off-exchange...but this is almost certainly not the case. Nevada's state-run exchange was a disaster last year; as a result, their on to off ratio was massively skewed. I'm certain that it's much less lopsided this year, now that they've moved to HC.gov...but there's no way of knowing what the off-exchange number is.

Finally, we come to Louisiana; this is the Health Benefit Deductibles report directly from the Louisiana Dept. of Insurance. The data, unfortunately, only runs through 4/30/14. I've confirmed that the 157,498 figure in the table below includes the 101,778 exchange-based QHPs that LA racked up by April 19th, 2014, and that it also includes 17,897 "transitional" policies (which I'm not counting here). That leaves 37,823 off-exchange QHPs.

Assuming that ratio has stayed the same, with 148,552 exchange QHPs, LA should have around 55,000 off-exchange QHPs at the moment.

As you can see, the ratios are all over the place. If you add up all of the above assumptions it ends up at around 43% exchange-based to 57% off-exchange. Unfortunately, most of these are so outdated that this isn't very useful; the situation (especially in Nevada) has changed dramatically from 2014 to 2015, and even month-to-month in some cases, so it's very difficult to pin down.

Still, I think I'm on safe ground by ballparking it at 55/45...that is, 55% exchange-based to 45% off-exchange QHPs nationally, which means the off-exchange numbers on the spreadsheet should be roughly 80% of the exchange number (except for Oregon, of course). 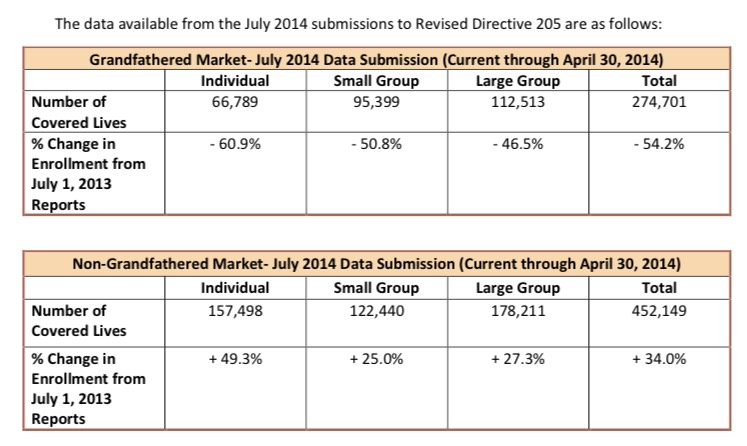