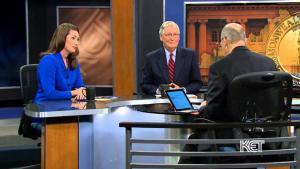 Yeah, I did a takedown of Mitch McConnell last night which gained some traction. However, that was more of a rant. Today, let's take a look at just how many times he flat-out lied about the Affordable Care Act (aka "Obamacare", aka "kynect"), shall we?

The yellow highlights are lies by McConnell. The orange highlights are either questionable/confusing statements by either him or the moderator, or otherwise just noteworthy:

(Moderator Bill) Goodman: has Obamacare and kynect been a boon or a bane for Kentuckians? Senator?

Mcconnell: Kentucky kynect is a website1. It was paid for by a $200 million and some-odd grant from the federal government. The website can continue. But in my view, the best interest of the country would be achieved by pulling out Obamacare root & branch and let me tell you why.

In order to try and provide subsidies for the uninsured—there were roughly 40 million of them2; put it another way, 85% of Americans had health insurance—Obamacare took $700 billion dollars out of Medicare3, a program for the elderly, used it as a piggy bank, took $700 billion out of Medicare over the next 10 years, in order to provide a subsidy for people who are not old and not poor.

Over on the consumer side, you’ve got lost jobs, CBO estimates 2.5 million jobs would be lost4, higher premiums5, higher deductibles, higher co-payments. A lot of catastrophic impact on the nation's health care system which could have been avoided by not passing this 2,700 page bill that essentially put the government in charge of America’s healthcare. I think that was a big mistake.

Now, with regards to kynect, it’s a state exchange6, they can continue it if they’d like to, they’d have to pay for ita because the grant would be over. And with regard to the Medicaid expansion, that's a state decision. The states can decide whether to expand Medicaid or not. In our state, the Governor decided to expand Medicaidb...

Goodman: And you would support the continuation of kynect?

Goodman: But would you support it?c

Goodman: 85,000f of those are in the private insurance market! What would you do with them?

McConnell: Those people, in all likelihood, now have...are now paying more for less8. And the hospitals are not experienced, they’ve got a new kind of uncompensated care9. People who now have insurance but the co-payments and deductibles are so high they still can't pay. So they have insurance that doesn’t meet their needsg...the reason for that, Bill, is the federal government is telling the health insurance companies what they can sell.

Goodman: Well, Senator, on a couple of points and Secretary Grimes we'll ask you to respond on this in a minute. On the CBO report of the $716 billion, that’s spread out over 10 years, and $400 billion, according to the research that I read, is due to Medicare annual updates for fee-for-service for doctors & hospitals and other health facilities like home health. They are not cuts or a shift.h They are a value-based reference in payment to Medicare.

McConnell: That's Washington talk for a cuti. I've had 70 hospital town hall meetings, Bill, over the last two years. Our hospitals are being rimrackedj by these Medicare reimbursement reductions. Look, these are the people who take care of the elderly. And they are being rimracked by the Obamacare, Medicare reimbursement reduction. I was in a meeting with the home health care organization just in the last couple of weeks. They're not going to be able to provide as many services because of these cuts. So let's make sure we understand what we're talking about here. $700 billion raid on Medicare10, a program for the elderly, in order to provide subsidies for people who are not old and not poor enough to be on Medicaid. That bill is a huge mistake.

Goodman: just one other point on job loss. Didn't the CBO report say the decline in the number of full-time equivalent workers are people not being employed at all and others working fewer hours. Isn't that the way how some have interpreted it in, and what you just said, a job loss?

Goodman: But they’re not getting their jobs cut...

McConnell: ...I don’t think that’s a good idea for the country to have more joblessness particularly as a result of this bill which was a huge step in the wrong direction. I think it was, in fact, the worst piece of legislation that has been past in the last half centuryk.

Goodman: ...and it's factual and substantiated by facts that premiums are going up all across the countryl.

McConnell: Absolutely. Premiums are going up12, deductibles are going up, co-payments are going up. Just the other day, it was announced that 14,000 people were losing their policy here in Kentucky. I'm sure there are some some people who are getting insurance who didn't have it beforem. Most of the people who signed up on Medicaid that is Medicaid eligible people who are signing up but on the private insurance market it's rimracked.

McConnell: How many of them got insurance after having policies canceled? And the new policies are not as good as the old one13.

Goodman: I'm not sure that number is availablen.

McConnell: They don't want to tell you.

1. Kynect is a hell of a lot more than a website, especially to the 527,000 Kentuckians who rely on it for their healthcare coverage.

2. Actually, the uninsured population in the U.S. was somewhere between 42 million - 47 million last fall, depending on your source. This may sound petty, but he's lopping out 2 - 7 million people, a substantial number. In addition, McConnell contradicts himself in his very next sentence. If 85% were insured, that's 15% who weren't. 15% of 316 million = 47.4 million people.

4. Bull. The CBO said no such thing. They said that the total workforce would likely be reduced by the equivalent of 2.5 million jobs due to people voluntarily leaving jobs they don't like since they're no longer locked into that job for their healthcare coverage. This is a good thing as it is leading to more small business startups, voluntary freelancers and so on.

5. Premiums were already going up at least 10% per year prior to the ACA, and the overall average increase for ACA policies in 2015 looks to be around 6% nationally, which means that the rate of increase is 40% lower overall than it used to be.

6. It's a state exchange which only exists due to the ACA.

7. Apparently he only counts those on private policies. People on Medicaid apparently don't count as human beings.

8. Actually, they're paying more or less (depending on the situation) for better coverage.

9. Actually, hospitals are reporting a reduction in uncompensated care, to the tune of $5.7 billion in the first year alone.

10. Lying sack of crap (sorry, this one deserves its own number for every instance)

11. Lying sack of crap (again, deserves its own entry)

13. That depends on the person. Some may feel it's worse, but 74% of private enrollees and 87% of Medicaid enrollees are quite happy with their new policy...including 74% of Republicans.

So, by my count that's 13 bald-faced lies in around 5 minutes or so. Impressive, in a crapweasel sort of way.

As for the orange highlights:

a. Yup, McConnell just admitted that the citizens of Kentucky would have to shell out over $700 Million per year in order to keep the kynect exchange in place as it is (including the 527,000 private policy/Medicaid enrollees)

b. "The Governor" = Steve Beshear, a Democrat. Thanks for reminding people that it's the Democrats who gave people kynect, Mitch!!

c. Kudos to Goodman for asking this Mitch point-blank, twice.

d. Bingo. This is where Mitch McConnell, the Republican Senate Minority Leader, openly calls for Kentucky's taxes to be raised by $700 million per year.

e. Goodman gives 521,000 as the combined enrollment figure. The most recent official number from KY's Lt. Governor was a bit higher, at 527,000, as of about a month ago. I assume the difference is due to a few thousand people dropping their coverage or having data issues; this is a minor quibble, however.

f. Hmmm...Goodman gives the private enrollment figure as 85,000. I have it estimated as around 91,600 as of September, but it's possible that I'm off by a bit. Again, not a major issue; could include non-payments or drop-offs.

g. "insurance that doesn't meet their needs..." ...as opposed to no insurance whatsoever. Yeah, I'm sure they'd much prefer that.

h. Again, kudos to Goodman for pointing out that McConnell is flat-out lying about the "$700 billion Medicare cut" crap.

i. Given how much McConnell claims to love spending cuts and how much money he claims is wasted due to "fraud and abuse", you'd think he'd applaud saving taxpayers $700 billion. Then again, he's also calling for $700 million in tax hikes in his own state, so...

j. rimrack: A sexual act in which one partner licks/sucks/nibbles/etc. his or her partner's butthole.

k. really? The worst piece of legislation since 1964?? Worse than the Patriot Act? Worse than the approval of NAFTA? Worse than DOMA? I guess from where McConnell sits, providing healthcare coverage to millions of people is worse than all of those.

l. Yikes. Major letdown by Goodman. Premiums are always going up "all over the country" but they're going up at a lower rate than usual thanks to the ACA, and in some states are actually dropping.

m. Wow!! McConnell actually admits that at least some people really are newly insured thanks to the law! Amazing!

n. OK, I'm a bit disappointed in Goodman, since the actual number is available, but I guess I can forgive him for not having it at his fingertips. For the record, the answer is that 75% of all kynect enrollees were previously uninsured...and yes, that's specific to just the private policies and to the Medicaid enrollees individually. The percent for each group may have shifted slightly up or down since April, but the 75% total figure has remained the same, so it's safe to conclude that it hasn't shifted much since then.

To her credit, Alison Lundergan Grimes finally gave a fairly strong defense of the Affordable Care Act / attack on McConnell for his idiotic claims (although she was, of course, still very careful never to utter the "O" word):

Goodman: how would you vote on a bill to repeal the Affordable Care Act?

Grimes: I would say that this is a matter of standing up for 500,000 Kentuckians. There's work -- Kentuckians. There's work that we have to do but we have to have a Senator realize what is the realities are. And the fantasyland that Mitch McConnell is in it doesn't show the statistics that we have in the state. We have a half a million Kentuckians who are for the first time ever are filling prescriptions. They're going to the doctor, getting check-ups. I will not be a Senator that rips that from their hands.

Goodman: would you give me one specific area where you would ever streamline or "fix" in your words the Affordable Care Act?

Grimes: Sure, extending the grandfathering clause. If you like your doctor you should be able to keep that. We need to mean that. That's the extension of the grandfathering. It require as Senator that wants to stop the partisan politics and trying to score...

Goodman: would you replace or change kynect?

Grimes: I think over half a million Kentuckians lives are better as a result of the creation of our state-based exchange. There's work, yes, that we have to do. But we have to have a Senator that wants to work in conjunction especially with the state of Kentucky to get it done.