I usually feel more pride in correctly predicting stuff than this.

In any event, you can expect a slew of new "OMG!! X MILLION POLICIES CANCELLED!!" attacks this fall as well...just before the midterms. It's not so much that this is false--some policies will be cancelled--as heavily exaggerated, along with the "impact" of those cancellations (most people will do exactly what my wife and I did...simply replace the old policy which isn't compliant...with a new one which is compliant and offers more comprehensive coverage...in many cases at a much lower rate after tax credits are applied, as long as they enroll via the ACA exchange instead of directly via the company).

Remember that when you start seeing the campaign attack ads with absurdly ominous music playing over black-and-white footage of someone reaching into the mailbox and pulling out...a notice from their insurance company (DUN-dun-dunnnnn...).

Take another look at that number: 50,000 total...from 7 states, with a collective population of nearly 30 million people.

...Now, that obviously won't make those people whose policies are cancelled feel any better, but a good chunk of them should already be aware that this was coming (since they presumably were informed that their policy had been given a 1-year extension last November), so I suspect that the actual number of people getting the vapors over the Scary Letter From Their Insurance Company will be far less dramatic than the GOP will make it out to be. 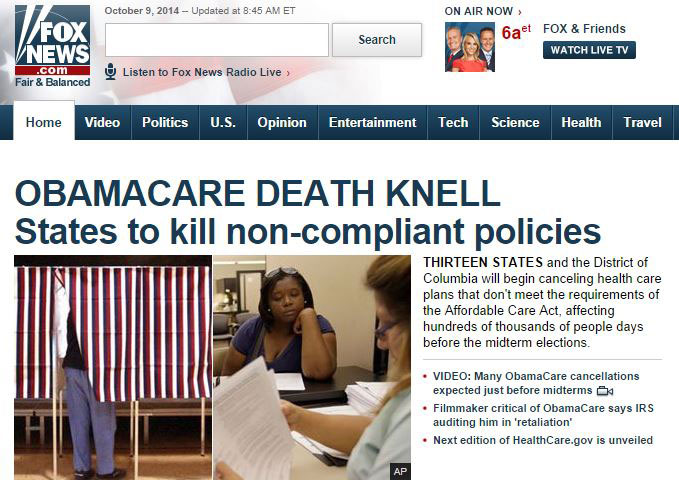 You're starting to get boring, FOX. Really.