While you were sleeping, QHP enrollments went up at least another 600K+

With the latest updates out of Colorado and the District of Columbia--both of which (to my surprise) showed an increase in the average daily rate of off-season exchange QHP enrollment in June over late April and all of May--I'm feeling a lot more confident about my overall off-exchange projection chart, which is currently showing a lower bound of around 9,000 per day and an upper bound of around 12,000 per day since April 19th.

In the interest of caution, however, I'm still keeping my "official" projection a bit lower still, at around 8,000 per day (though this is up from the 7,000/day I had been using until now). This translates to around 616,000 new QHP enrollments as of yesterday (77 days out), bringing the estimated total to a bit over 8.6 million overall. 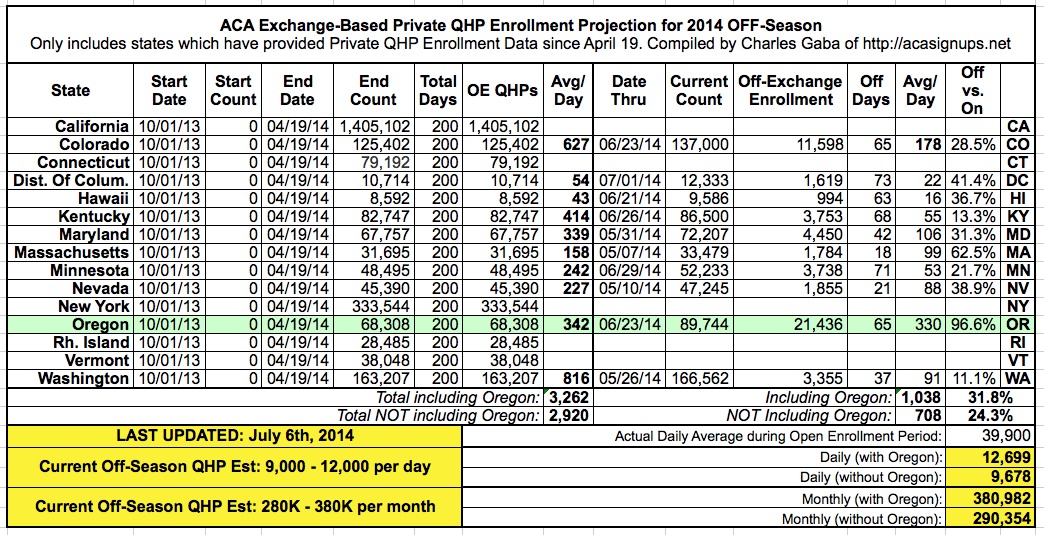 The upper bound number of 12K/day would add up to around 924K (a total of just over 8.9M), but I'm reluctant to use that since I'm not entirely sure whether some of these enrollments are "double counted"...that is, if someone changes from one QHP to another due to a qualifying life event, is that being counted as a new enrollment or does it get categorized some other way?

It's also important to keep in mind, as I was careful to note in my recent pissing match with Forbes' Chris Conover, that this only tracks gross QHP enrollments on the ACA exchanges; that is, it doesn't subtract out the roughly 10% which don't/won't pay for the 1st month's premium. If you lop those out, the paid total should be somewhere around 7.6 - 7.7 million at this point.

I should further note that this also doesn't include any subsequent attrition (2nd month, 3rd month, etc.), which Conover claims is between 2-5% each month. I have no idea whether he's correct about this, but in the absence of any other solid data on the subject I'm willing to give him the benefit of the doubt on it for now.

However, while it's perfectly reasonable not to count the 10% who never paid their first premium at all, you can't simply dismiss people who drop out the 2nd, 3rd, 4th and so on. Many of these folks will have an ACA QHP for a few months and will then change to some other coverage due to other types of life changes, such as aging into Medicare, getting a job with ESI benefits, marrying someone who's already covered, falling on hard times and moving onto Medicaid and so on. There's nothing wrong with this; that's exactly how the ACA is supposed to work...the QHP covers them for a period of time, then they move on to something else, just as it should be.

This doesn't mean that the monthly attrition rate is meaningless; obviously it's important to the CBO in terms of keeping track of how much money is paid out in tax subsidies; as I noted in my final response to Conover, if you use the "1/12ths of a person" formula, the "actual" number of QHPs "fully enrolled" for the full 12 months of 2014 is likely to end up being around 5.5 - 6 million "people-units" from a budgetary POV. However, in actual "human beings helped" terms it's rather insulting and disingenuous to try and slice people up this way.

Anyway, I'm still holding out hope that California will release their updated data soon. Until then I'm relying on only around 8% of total enrollments to extrapolate for the rest of the country; if/when CoveredCA comes through, that will bring things up to around 26%, which will put my estimates on more solid ground. However, I'm still quite proud of my track record to date, so I'm not too worried about it.